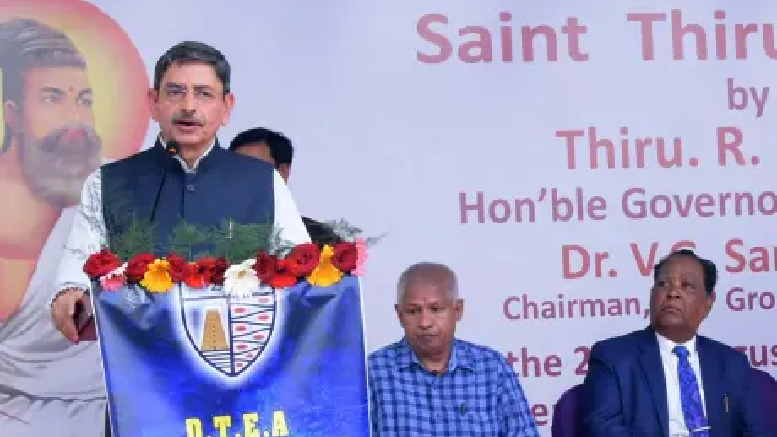 “Thirukkural is not just a code of ethics and morality but an epic book holding the wisdom of eternal spirituality. The great sage Thiruvalluvar is one of the brightest suns in the galaxy of ancient sages.”  –  Governor R.N. Ravi

Tamil Nadu Governor R.N. Ravi on Thursday said the British East India Company evangelised Bharat and missionaries like G.U. Pope who first translated Thirukkural into English, presented a de-spiritualised version of the classical Tamil text. “The translation was done with the colonial objective to trivialise the spiritual wisdom of India,” he said.

Unveiling a statue of Thiruvalluvar at Delhi Tamil Education Association Senior Secondary School in New Delhi, the Governor said, “Thirukkural is not just a code of ethics and morality but an epic book holding the wisdom of eternal spirituality. The great sage Thiruvalluvar is one of the brightest suns in the galaxy of ancient sages. The ‘Aadhi Bhagavan’ quoted in the first verse of Thirukkural is found in all Indian languages. The concept of ‘Aadhi Bhagavan’ is in Rig Veda too. It is at the core of Indian spirituality. It is far from ‘Primal Deity’ as translated by colonial apologists.”

He also charged that the British attempted to destroy Bharat’s great spirituality by distorting Bharat’s history, and culture and colonising the people’s minds. “Tamil language and its literature have given profound and timeless works such as Tholkappiam, Silapathikaram, Manimekalai, Purananooru, and many more,” the Governor said and narrated how the author of Tholkappiam having written the great book presented it to Atankot Acharya who was a great scholar in the four Vedas.

Stating that Tamil Siddhar Tirumoolar’s Thirumanthiram written 3,000 years before the Common Era tells all about spirituality and yoga, the Governor urged youngsters and scholars to shun the colonial interpretation of these priceless books and have a soulful reading of these scriptures to experience their true essence.

According to a statement released by the Raj Bhavan on the Delhi event, the Governor said he admired the Tamil culture of gifting books when people meet each other and wanted it to be followed by people across the country. –

(The story was published on The New Indian Express on 26 August 2022 and has been reproduced here with minor edits to conform to HinduPost style-guide.)