Troubles faced by people in their day to day lives, which until recently were successfully suppressed from public discourse by our pseudo-secular media and establishment politicians, are now being openly debated thanks to social media.

Singer Sonu Nigam today tweeted his thoughts on the long-running issue of mosque loudspeakers blaring the Muslim azaan (call to prayer) 5 times a day, with the earliest prayer being at pre-dawn – This kicked off an expected furore, with left-liberals of all hues rushing to condemn Sonu Nigam  – no freedom of expression for Sonu Nigam, then?

Mainstream Media (MSM) was quick to label Nigam’s comments as a ‘twitter rant’ – such labeling is often used when someone voices an opinion that upsets the carefully crafted Nehruvian secularist applecart. Through the headline itself, MSM has dismissed Sonu Nigam’s concerns as emotional & juvenile – mindless ranting. But if one of their own like Sagarika Ghose calls Sri Ram as a ‘divine encroacher’, then it is projected as a thoughtful, progressive, alternate viewpoint by the perfumed, Anglicized elites which constitute the Lutyens’ club.

This recent article on VijayVaani shows how Azaan blared from loudspeakers is now a major problem across the country, how it violates court orders, and how even many Muslims are helpless to get their maulvis (Islamic preachers) to tone down. The author argues convincingly, when he says –

“It can be argued that azaan lasts only a few minutes. But at times competitive religiosity between sects ensures azaan is longer and louder than another. Thanks to the courts, media and NGOs like Sumaira Abdulali of Awaaz Foundation, noise levels during Ganeshotsav and Diwali have come down significantly. The police have done a good job by controlling loudspeaker volumes of the Ganesh mandal outside our building.

The question arises, since the devout will come anyway, why disturb the neighbourhood? And can the disturbance caused during a short duration festival (say firecrackers during Diwali) justify the use of loudspeakers five times a day for 365 days of the year?”

What does the law say?

“Coming to the legal aspects, an 18 July 2005 Supreme Court order states, ‘The noise level at the boundary of the public place where loudspeaker or public address system or any other noise source is being used shall not exceed 10 dB(A) above the ambient noise standards for the area or 75 dB(A) whichever is lower. No one shall beat a drum or tom-tom or blow a trumpet or beat or sound any instrument or use any sound amplifier at night (between 10 p.m. and 6.a.m.) except in public emergencies.” (https://indiankanoon.org/doc/929541/)

This means no loudspeakers should be used or sound emitting firecrackers be burst between 10 pm and 6 am. However, The Noise Pollution (Regulation and Control) Rules, 2000 empowers State Governments to permit use of loudspeaker or public address system between 10 pm and 12 pm mid-night on or during the cultural or religious occasions for a limited period not exceeding 15 days. The same rules state, “permissible decibel levels (50dB during day and 40 dB at night for silence zone and 55 dB during day and 45dB at night for residential area).”

Our left-liberals will be quick to jump and take offense on behalf of Muslim fundamentalists, by comparing this with use of loudspeakers in Hindu temples and on other public occasions like festivals, weddings etc. Nidhi Razdan of NDTV did not disappoint by tweeting this reply to Sonu Nigam –

Loudspeakers should be banned for any religious or social event in public places.Including weddings where your songs blare through the night https://t.co/5McMMq6eX2

1.) Use of loudspeakers for Hindu festivals happens on a few days of the year, not 5 times a day, 365 days a year.

2.) The trend of loud music (mostly Bollywood) being played during festivals is disturbing and ought to be curbed – most Hindus will support administration if the laws related to noise pollution are implemented transparently, and without bias. The ‘without bias’ part is important, because there have been many instances where secular regimes have clamped down on temple loudspeakers, but allowed mosques to blare their prayers with impunity. In onc case from Moradabad, UP, the then SP Government had pulled down loudspeakers from a Hindu Dalit temple as it was located in a ‘Muslim majority area’ 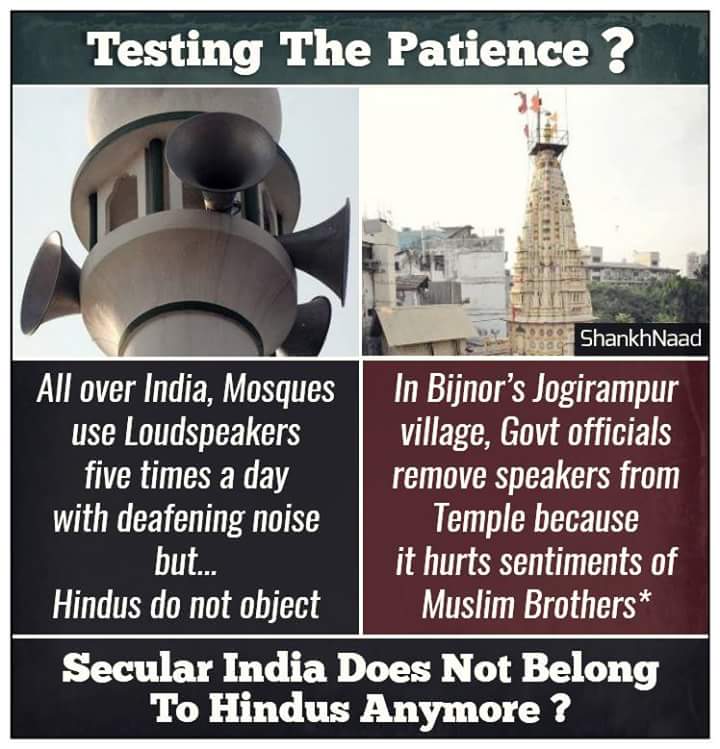 3.) Police does act if a complaint is received against unauthorized loud music being played during weddings, Hindu religious processions etc. More can happen on this front to implement the law, but any such move will have support from overwhelming sections of Hindu society. On the other hand, in response to an RTI application seeking details of what action was taken on unauthorised loudspeakers in mosques after a October 2014 Bombay High court order against use of such illegal loudspeakers, the Mumbai Police said it was unable to take action as it could lead to “law and order problems.”

One of the most shocking aspects of this whole debate came to light when CNN News18 anchor Zakka Jacob told film director Vivek Agnihotri, “if you are living in a neighborhood where you are close to a mosque (and azaan call over loudspeaker is a disturbance…then move your house..find another neigborhood”

Where @Zakka_Jacob asks me to 'move my house' if #Azaan bothers me. Now you know why mainstream media is dying slowly. pic.twitter.com/ZJZDOvzQ9b

So, the choice in front of citizens who want the State to implement the law and deal with a social problem, is to just relocate! Simple, problem solved.

The below tweets certainly rings true –

Stage1: They don't rent houses to us

Stage3: Get out of area if you can't stay

What has the 4AM Loudspeaker Azaan got anything to do with prayers. The blaring at 4AM is to show yr middle finger to Hindus, not piety. https://t.co/8LZOxDQ7Hy

It remains to be seen if a move to ban loudspeakers from mosques will garner support from Indian Muslims or will orthodox, medieval bodies like AIMPLB (All India Muslim Personal Law Board) and fanatical maulvis rule the roost again? Will our left-liberals allow such a debate to even take place, or will they use the this public order issue to stoke the fires of Muslim victimhood under Modi rule?