Sonia & Maneka, Women of Bengaluru Need You to Stand Up 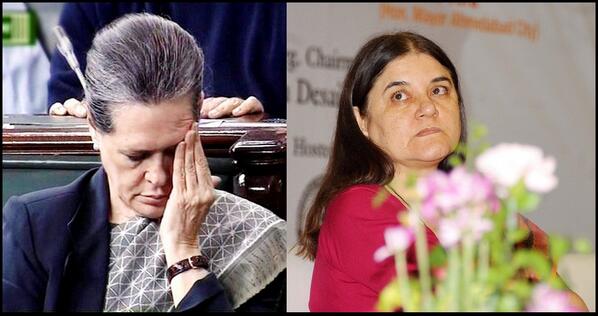 After the disgraceful mass molestation of girls celebrating New Year’s eve on MG Road, comes this shocking video of a girl being molested and brutally assaulted by two scooter-borne criminals in Kammanahalli area of Bengaluru –

These two incidents exemplify the progressive deterioration of law & order in Bengaluru, the IT capital of Bharat, a hitherto safe city especially with regards to safety of women. Ever since the Congress took power in Karnataka in 2013, the state and especially Bengaluru has seen a spree of robberies, rapes and hackings of Hindu activists. When questioned over the mass molestation in Bengaluru, current Karnataka Home Minister G Parameshwara said, “Such incidents do happen on New Year’s eve and Christmas.“

2.) Aug 2016: A burglar raped a techie at a paying guest (PG) accommodation centre in Koramangala, Bengaluru.

3.) May 2016: A young Manipuri woman in south Bengaluru was abducted in full public view and dragged to an under-construction building by an unidentified man, who allegedly tried to rape her.

The Karnataka police has seen unprecedented level of politicization under the Siddaramaiah regime which we covered in an earlier article. The harassment and interference by ruling party leaders and their agents, has resulted in police officers like DSP MS Ganapathi and DSP Kallappa Handibag committing suicide while DSP Anupama Shenoy was forced to resign from the force. DSP MS Ganapathi in fact left an audio visual suicide note blaming senior police officers and ex-Home Minister KJ George & his son Rana George for driving him to death.

KJ George got the sensitive home portfolio in 2013 as he was a Christian and due to his proximity to Congress president Sonia Gandhi – but his 2.5 years tenure was marked with controversy which led him to being replaced by G Parameshwara. George even said “two men raping a women cannot be termed as gang rape” when confronted with rising graph of rape cases under his watch – these remarks triggered a national controversy with even the National Women’s Commission issuing a notice to the minister.

Sonia Gandhi is the unequivocal head of Congress – unlike the UPA era when she craftily installed a puppet PM in Man Mohan Singh to escape direct accountability while still running the show through NAC and her personal secretary Ahmed Patel – she is responsible for the work of Congress state Governments. Sonia Gandhi and her son Rahul (currently frolicking in London to ring in the new year) need to camp in Bengaluru until the law & order mess there is sorted out.

As a first step, Sonia Gandhi would do well to condemn her senior party leaders like Digvijay Singh, Vyalar Ravi and others who routinely issue crass and misogynistic statements.

Women and Child Development (WCD) Minister Maneka Gandhi has been vocal on several issues that are either completely unrelated to her ministry, or peripheral issues at best. She has spoken about banning Jallikattu, temple elephants, and policing online ‘trolling’ of women. Her WCD ministry is hobnobbing with anti-Modi elements like lobbyist Dilip Cherian (whose PR agency Perfect Relations just got hired by AAP) and an abusive journalist like Swati Chaturvedi.

Maneka Gandhi and her ministry are failing at their primary job of making a tangible difference in lives of women – we are yet to see simple measures like ranking State Governments for safety of women through objective data and dashboards, launching sustained multi-channel awareness campaigns against so-called eve teasing etc.

There is also strong evidence that suggests her ministry is deeply influenced by the evangelical and secular lobby whose anti-Hindu hate recently saw the National Commission for Protection of Child Rights (NCPCR), an associated organization of the WCD, insinuate that Diwali causes a rise in the sexual abuse of children. World Vision, a fanatical Christian evangelical organization that operates under cover of disaster relief and child welfare has also spread its tentacles to WCD during Maneka Gandhi’s reign.

National commission for Women (NCW – another affiliate organization under aegis of WCD Ministry) has also been largely ineffective in controlling crimes against women. NCW is quick to condemn misogynistic remarks by politicians and other celebrities, but does not do much beyond this.

PM Modi should also ask some hard questions – is WCD Minister Maneka Gandhi really doing her job, or just playing to the Lutyens’ gallery? If not, why is she continuing in this key ministry? Surely, there are other qualified, passionate women politicians within the BJP fold who can do a far better job, such as Meenakshi Lekhi to name one alternative.