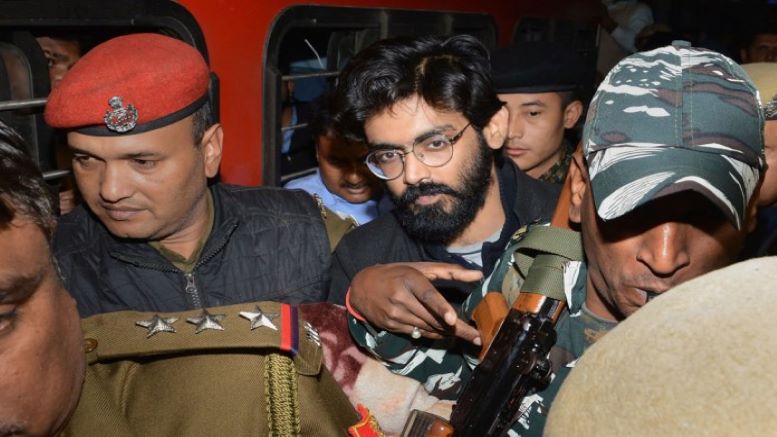 Fresh charges of sedition and UAPA have been framed against Sharjeel Imam who provoked rioters with his inflammatory speeches leading to anti-Hindu Delhi riots following the passage of CAA. In his incendiary speech, Imam had called for the secession of Assam from the rest of Bharat.

Sedition charges were slapped against him by Delhi’s Kardooma court for his December 13, 2019 speech at Jamia Milia Islamia University and January 16, 2020 speech at Aligarh Muslim University. Charges have been framed under sections 124A (sedition), 153A, 153B, 505 of the IPC, and 13 of the UAPA on the order of Additional Sessions Judge Amitabh Rawat. He was taken into custody by the Delhi police on January 28, 2020, and is currently lodged in Tihar jail.

Imam has been charged with sedition, promoting enmity between different groups on grounds of religion, race, place of birth, imputations prejudicial to national integration, and public mischief under the Indian Penal Code, and indulging in unlawful activities under the Unlawful Activities (Prevention) Act. The Delhi police had leveled allegations of inciting hatred, contempt, and disaffection toward the central government and instigating people to riot.

He is accused of delivering seditious speeches and inciting a particular section of the community to indulge in unlawful activities, detrimental to sovereignty and integrity of the nation. In the garb of protesting against the Citizenship Amendment Act, he exhorted people of a particular community to block the highways leading to the major cities and resort to ‘Chakka Jam’, thereby disrupting normal life.

Although Imam had been denied bail by the Delhi Additional Sessions court judge Anuj Agarwal in October 2021 who held that his speech was communal and divisive in nature, the Allahabad HC granted him bail on November 27 last year.

Imam is an ex-student of JNU who is one of the key members of the group that organized the anti-CAA protests at Shaheen Bagh. Multiple FIRs were registered against him with the Assam, Arunachal Pradesh, and Manipur police for calling for the separation of Assam from Bharat. An FIR was also filed by the Delhi police and in Aligarh District for his provocative speech outside Jamia Milia Islamia University in December 2019.

In both the FIRS, Imam was charged under sections 124 A (sedition) and 153 A (promoting or attempting to promote disharmony or feelings of enmity on the grounds of religion, race, place of birth, residence, language, caste or community, or any other ground whatsoever), 153B (making statements provoking breach of peace) and 505(2) (statements made which are alarming, false intention to create disharmony) of the Indian Penal Code (IPC).