The Delhi riots triggered by violent anti-CAA ‘protestors’, which were misleadingly termed as a ‘Muslim pogrom’ by an American politician running for President, are being falsely attributed to ‘hate speech’ by BJP leader Kapil Mishra.

After crowds of Muslim women and anti-CAA demonstrators squatted at one of the busiest thoroughfares of the capital city for months, turning the lives of daily commuters hellish, another group of anti-CAA Muslim protestors decided to occupy more such key roads right on the eve of the US President’s visit. Kapil Mishra visited one such site in Jaffrabad on February 23rd and asked police to clear the area within 3 days. Immediately afterwards some stone pelting broke out between anti-CAA protestors and citizens opposed to the unruly protests.

The next day morning, a police team was brutally assaulted in Chand Bagh area when they were trying to mediate with a large crowd of anti-CAA protestors including Muslim women. One police constable was murdered and a DCP was critically injured by the violent mob. This act signalled wide-spread rioting which engulfed North East Delhi over that day and the next. Liberal media and opportunist politicians worldwide are tagging this as a ‘Muslim pogrom’ which was allegedly incited by Kapil Mishra’s ‘hate speech’.

However, neither media nor politicians in Bharat or abroad have covered the multiple instances of actual hate speech targeting Hindus, their faith, their holy symbols, or targeting the Indian state and its institutions. Such speeches, chants and banners are a dime a dozen – and are the handiwork of those now playing victim –  Islamist men, women, youth, and ‘secular’ politicians.

Hindus didn’t retaliate and burn down the city when Shaheen Bagh started echoing with slogans demanding Jinnah Wali Azaadi. Jinnah was the man whose claim for a separate Islamic nation for the Muslims led to a bloodbath of Hindus and severed Bharat to make a country only for the Muslims. Those, who in 2020, desire “Jinnah wali azaadi”, should know that they were given that azaadi 70 years ago. But if asked to go to that ‘azaad’ land, these people get offended. The slogan championing ‘Jinaah wali azadi’ was an insult to lakhs of Hindus who lost their lives during the partition because the Muslims wanted a different state, and got one, and still chose to stay back in Bharat in large numbers. Despite this excruciating insult, Hindus didn’t take to the streets, rioting.

A JNU “student”, a Muslim youth leader, Sharjeel Imam, unapologically provoked his followers – who are largely his co-religionists – to target the “chicken’s neck” and cut off North-east from mainland Bharat. His mother, equally brazen, shows no remorse for her son’s degeneracy, and conveniently plays the victim card by putting the blame on the administration. Having suffered the partition of Bharat once, Hindus swallowed this insult and maintained peace, and still didn’t attack Sharjeel Imam and his family for their treacherous speech and ideology.

Way before Kapil Mishra stepped out to give a voice to the suffering silent majority, on February 16th AIMIM leader Waris Pathan made a communally charged statement while addressing an anti-CAA rally in north Karnataka. But no Hindu rushed to riot upon hearing his words “15 crore hain lekin 100 crore pe bhari hain” (we 15 crore Muslims are enough to crush 100 crore Hindus) 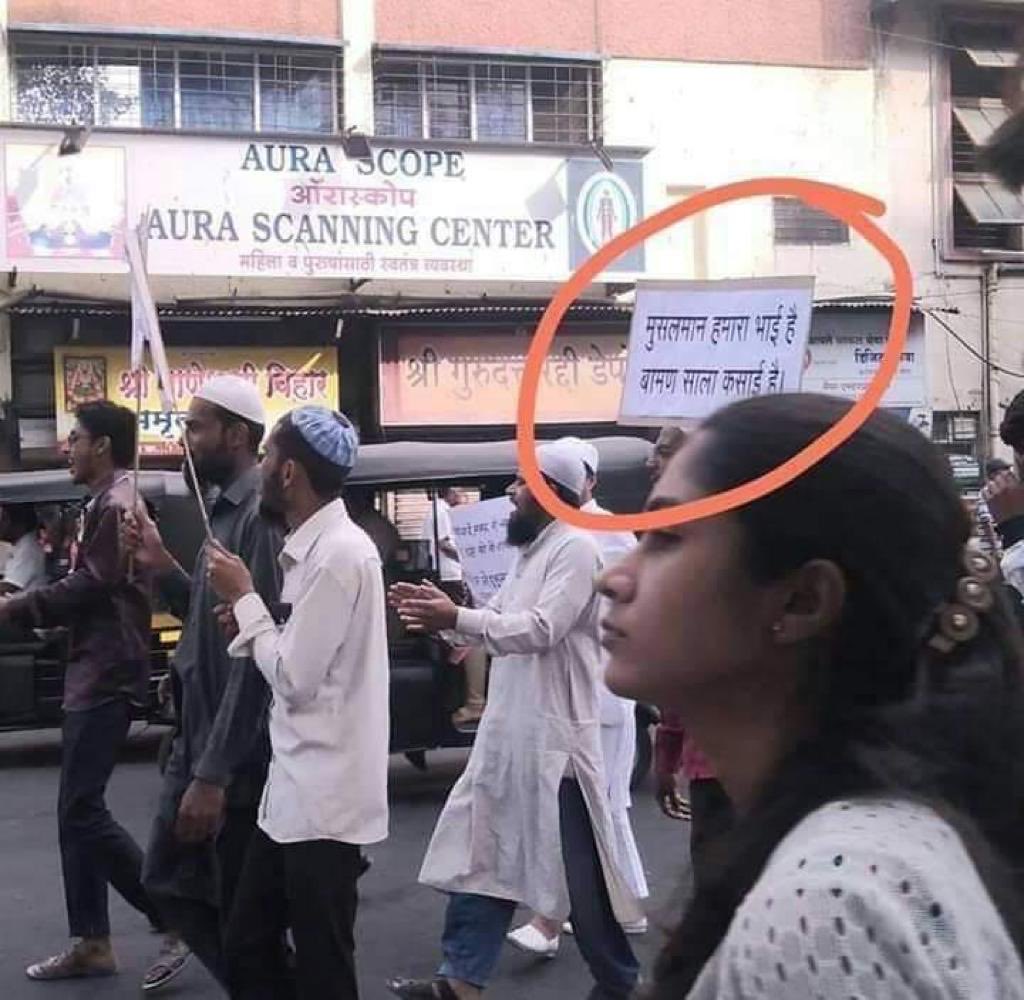 A band of Muslim anti-CAA protesters held up a poisonous poster in Pune screaming, ‘Musalman humara bhai hai, Brahman sala kasai hai.’ (The Mussalman is our brother, the Brahmin is a butcher). Only in a country inhabited mostly by Hindus, can a group of so-called minorities enjoy the privilege of abusing the majority with impunity. Trying to play off Hindus against each other, these bigots know that such is the ignorance which media & politicians have created that the masses are unaware that the humanitarian CAA act will help poor, persecuted Dalit Hindu refugees the most. To compare Brahmins, the group primarily assigned the duty of spreading dharmic knowledge & taking care of temples, and which is mostly vegetarian, to a butcher is a blasphemous insult, and still not a single Brahmin came out of his house in protest. Shaheen Bagh protesters covered Maa Kali (a revered Hindu Goddess) in the Muslim veil, hijab. They covered the walls of the capital city with heinous posters of a slaughtered cow on a lotus: both carrying huge significance for the Hindu faith and those who follow it. Despite this brutal symbolic attack on their religion and beliefs, Hindus didn’t resort to violence.

Liberal media, which has been proven to be pro-Islamist for many years now, has done enough damage to the image of Bharat by painting the Muslims as poor victims of Hindutva brutality. They will never reveal how the Hindus were verbally and symbolically targeted by the Islamists masquerading as students and leaders since the passing of the CAA in December 2019. Notwithstanding the environment infused with acute hate generated by the Islamist ecosystem, the Hindus of Bharat didn’t explode into rioting. Instead, they remained patient. But one Kapil Mishra asking police to empty a vital location leads to him being anointed the mastermind of the riots which burnt the capital city.