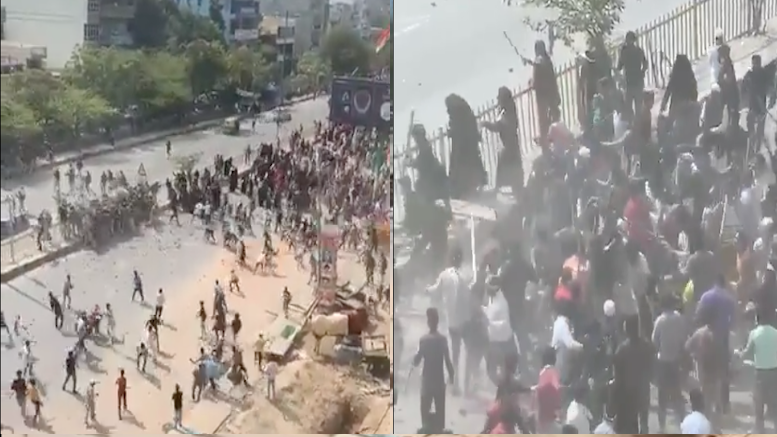 A video has emerged where a violent mob of anti-CAA protestors, including Burkha clad women, can be seen pelting stones and brutally beating up Delhi police personnel in Northeast Delhi’s Chand Bagh area, one of the epicentres of the anti-Hindu rioting in the national capital last week.

It is believed that Head Constable Ratan Lal was martyred and DCP Amit Sharma left half dead in the same violence that can be seen in the video, which was first shared by Indian Express journalist Mahender Singh.

The video is being shot by someone from a building overlooking the main road where the violence took place. The video begins with with men pelting stones at a police posse of 20-25 policemen. Police fires a tear gas shell to disperse the crowd, and the video shows men running away. Then, from the opposite side, where a big tent has been erected, fierce stone pelting ensues forcing the policemen to huddle together for protection.

A group of 5-6 Burkha-clad women lead a mob, including men, ever closer to police and continue pelting stones. By now, the group that was earlier running away in the other direction too returns and this mob of at least 500 people surround the police posse, which is by now only trying to defend itself and climb back over the road median back to the other side. They appear armed only with lathis and riot shields – there is no evidence of police firing in self-defence, or even firing in air to disperse the murderous mob.

At 0:51, the man shooting the video or someone standing next to him, says – “The poor policemen”. By now, the mob has fully overpowered the police and is raining lathis (sticks) and stones from up close.

At 1:06, another man says what sounds like “don’t they (police) have bullets …why don’t they fire, they should fire.” There seem to be policemen standing on the other side of the street, and a few policemen can be seen throwing the stones that were pelted on them back at the mob, in a desperate attempt to save their colleagues who are encircled by the mob. At 1:21, a man says “Oh look, they have caught hold of one policeman.”

It is clear from the video that either the police was not equipped with any sort of firearms, or they did not have orders to fire. Another journalist has shared another video of the same violence from another angle, which again shows the brutality with which Delhi Police jawans were assaulted by the mob.

In another video shared by Mahender Singh, 4-5 cops can be seen carrying an unconscious DCP Amit Sharma to safety via a service road on the other side. Some in the mob notice this, and not satisfied with lynching the DCP to within an inch of his life, they rush across to pelt stones at the retreating cops. Somehow, the cops manage to whisk the DCP away – he was later admitted to ICU and put on a ventilator, and is now out of danger.

#UPDATE:. @DelhiPolice found one more video - injured DCP Amit Sharma was taken by all the police personnel from North-East Delhi’s Chand Bagh area after he was attacked. @IndianExpress, @ieDelhi pic.twitter.com/gSl0GUx3sn

Such was the ferocity of the attack on police, that an ACP who saved injured DCP Amit Sharma had his helmet broken into two with a stone.

In other news, senior intelligence officers have told Times of India  that the murder of IB staffer Ankit Sharma was likely a “targeted killing” and not a random act of rioting.

Ankit and few of his friends had stepped out around 5 PM on 25th Feb and were standing on one side of a small bridge while heavy stone pelting was on from the other side. He tripped over a stone and fell, and some men crossed over to drag him away into AAP Councillor Tahir Hussain’s house.

When his friends tried to retrieve Ankit, the heavy stone pelting and petrol bombs being thrown from the roof of Hussain’s house prevented them from doing so. This has been corroborated by several eyewitnesses testimony.

Ankit was stripped and brutalised. His body was then dragged to the drain and dumped. The body, which had only undergarments on it, was fished out from the drain the next day. Doctors conducting the post-mortem had told a cop present there that it had at least 54 deep stab wounds.

“The sequence indicates that the killers may have been trying to send across a message. This is bigger than what meets the eye,” a senior intelligence officer told TOI.

Talking about ‘targeted killing’ becoming the strongest line of probe, an investigator said: “The fact that Sharma was abducted and taken away and not killed or harmed at the spot by the mob had raised suspicion at first. The theory has only been strengthened as the sequence of events has become clearer. Vengeance is clearly visible by the condition of the body. Nobody is killed like this usually by a mob,” he added.

“Leads from technical surveillance in the area is awaited. We are also trying to trace a group of Bangladeshi criminals whose location has come in the area around that time,” a senior police officer told TOI.

In another recorded instance of police facing wrath of anti-CAA rioters, Mohammed Shahrukh fired several rounds and then pointed his pistol right at constable Deepak Dahiya in the Jaffrabad area on 24th Feb. Shahrukh was later arrested from Shamli, UP.

As soon as Citizenship Amendment Act (CAA), a humanitarian law giving expedited citizenship to 6 persecuted minority religious groups from Islamic theocracies of Pakistan, Bangladesh and Afghanistan, was passed by both houses of Parliament in December, violent rioting had broken out in West Bengal, Delhi, UP, Bihar, Maharashtra, Karnataka and other states.

Back in December too, chilling visuals & videos had emerged of attacks on police and ordinary citizens; arson, loot and vandalism in the name of anti-CAA protests –

UP was able to control the mass anti-CAA violence, which had broken out across multiple cities by empowering police to control the situation – 19 people died (mostly rioters), 288 policemen were injured (61 received firearm injuries), 1113 people were arrested and 5558 preventive arrests were also made. The administration is now recovering damages from rioters identified through CCTV and other footage. The violence in UP was later proved to be fuelled by the radical Islamist organisation PFI.

Opponents of CAA have spread a false narrative that the law, along with a proposed nationwide register of citizens (NRC), is part of a conspiracy to strip 200 Indian Muslims of their citizenship. Despite multiple assurances by the Government and legal experts that NRC, a bipartisan initiative that even the previous Congress government supported, is solely intended to identify illegal immigrants (Bharat has the largest illegal immigrant population in the world, mostly from Bangladesh with which we share a porous border), the rumours have refused to die down.

At least 143 petitions have been filed in Supreme Court (SC) against CAA – by multiple NGOs, activists and political parties like Congress, TMC, AIMIM, RJD etc. While refusing to stay the law which went into effect from 10 Jan, the SC indicated it would set up a Constitution Bench to hear the matter.

However, for opponents of CAA, the legal route was not enough.

While Islamist organisations like PFI, JIH and assorted maulanas (Muslim clerics) across the country have issued shrill warnings of bloodshed & revolt, their left-liberal-secular counterparts (activists, intellectuals, journalists and politicians) have called for Muslims & youth to ‘not depend on Supreme Court or Parliament, but hit the streets‘, ‘bring the country to a halt through blockades and cut-off the North East‘, ‘mobilisation outside the law‘. They have unanimously maintained that the Delhi riots was a ‘state-sponsored pogrom of Muslims’, and the same narrative has been peddled in international Western media as well.