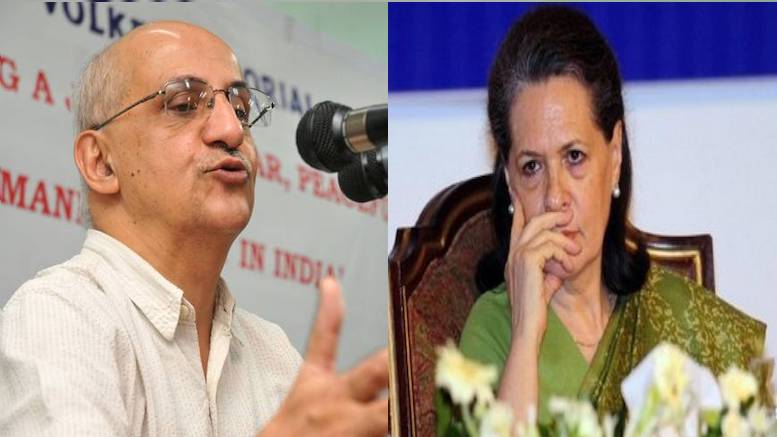 Harsh Mander, a retired bureaucrat who went on to become a leading member of Sonia Gandhi’s extra-constitutional NAC (National Advisory Council) in UPA era, is now going around the country openly inciting mass revolt against Parliament and Supreme Court over CAA and NRC.

In a viral video, he can be seen inciting a crowd protesting against CAA-NRC outside Jamia Milia Islamia university in Delhi.

Imagine that THIS man is in HC to get FIRs done against people for hate speech.

This man was given midnight hearing by a judge. Imagine.

In the video, Mander can be heard saying, “This fight (against CAA-NRC) will not be won in Supreme Court. We have seen the Supreme Court in recent times – in NRC matter, in Ayodhya matter, in Kashmir matter (abrogation of Article 370) – Supreme Court has failed to defend humanity, equality and secularism. Still, we will try there – it is our Supreme Court, but the decision will not happen in Parliament or Supreme Court. You, the youth will decide what kind of country you want to leave for your children. Where will this decision happen? It will happen on the streets…we all have now hit the streets.”

On 22nd February, while delivering the keynote address at a national conference on ‘Statelessness and the Right to Have Right’, organized by The Legal Aid Society, West Bengal National University of Juridical Sciences in association with Cornell Law School Human Rights Clinic in Kolkata, Mander again repeated his call for open revolt against the highest democratic institutions, and warned of “immense bloodshed in Bengal if NPR is enforced”.

“If NPR happens, the authorities will get the right to identify people who they feel are doubtful. The CAA will do the rest. The 2003 amendment of the Citizenship Act needs to be withdrawn…The issue won’t be resolved in Parliament or any court. It has to be resolved on the streets,” Mander said. He called the violent and disruptive protests that have been launched over CAA-NPR-NRC with backing of radical Islamist organisations like PFI, JIH etc as “explosions of light after a long, dark journey.”

Earlier, Mander had said he would ‘declare himself Muslim’ if CAB gets Parliament nod. It is not known whether he has made any such declaration after the law was passed. He also said he would withdraw his citizenship and refuse to submit documents for the national register of citizens (NRC) exercise, and asked everyone to join this ‘civil disobedience’. But it looks like he has left the path of ‘civil disobedience’ pretty quick, and is now inciting revolt against the state.

Who is Harsh Mander?

Harsh Mander is a leading light of Bharat’s far-left activist & civil society circuit which sees nothing intrinsically good in the Bharatiya State. For them, Bharat is an oppressive nation with no regards for human rights, and hence it needs to be reformed by them, the self-appointed unelected guardians of the Republic’s ‘moral fibre’.

He shares this space with others like Arundhati Roy, Shabnam Hashmi, Teesta Setalvad, John Dayal, Anand Patwardhan etc. For this lot, either Bharat abides by their diktats or it deserves to be set on fire. Democracy is fine for this cabal as long as it delivers outcomes palatable to them (Congress victories), else it’s just ugly ‘majoritarianism’.

Likes of Mander would be confined to margins of public discourse in any self-respecting nation, but in Bharat he is part of the mainstream. An alumnus of St. Stephens (Shashi Tharoor was his batchmate), this ex-bureaucrat teaches courses on poverty and governance at the Indian Institute of Management Ahmedabad, and St. Stephen’s College, Delhi. Past teaching assignments include the LBS National Academy of Administration, Mussoorie, and the Nelson Mandela Centre for Peace and Conflict Resolution at Jamia Millia Islamia, Delhi.

People like Mander were promoted by Sonia Gandhi during the disastrous UPA era which weakened Bharat in every possible way – economically, socially, security-wise. Sonia appointed Mander to the NAC (National Advisory Council) in 2010 – this controversial unelected ‘civil society’ cabal was the real brain behind most of the major policy initiatives taken by UPA like RTE, MNREGA etc. PM Manmohan Singh was reduced to just a rubber-stamp in front of the left activists like Mander, Yogendra Yadav, Jean Dreze, Aruna Roy, Anu Aga etc.

Mander was one of the brains behind the diabolical Communal Violence Bill (CVB) conceptualized by NAC and introduced by Congress in Parliament. This bill posited minorities as the only possible victims of communal violence, and put all the burden of proving their innocence on majority (read Hindus) alone.

As per this OpIndia report, Harsh Mander has links to US billionaire George Soros who recently declared ‘war on nationalism’ across the world, with special focus on Narendra Modi. Soros pledged $1 billion to fund a new university network to tackle the spread of nationalism in a speech at the World Economic Forum.

“Harsh Mander is the Chairman of George Soros’s Open Society Foundation’s Human Rights Initiative Advisory Board. His antics against the government do not need much elaboration. During the recent spate of violence after the passage of the Citizenship Amendment Act, Harsh Mander with his organization ‘Karwaan-e-Mohabbat’ published a report on the violence at the Aligarh Muslim University that absolved the students of all sins and peddled numerous lies against the Uttar Pradesh Police. Later, of course, the entire report turned out to be a massive fraud.”

But Soros is not the only foreign funder of Mander’s ‘activism’. Mander is also the Director of the Centre for Equity Studies (CSE), a ‘research’ NGO based in New Delhi with FCRA no. DL/231661130. CES’ ‘donors’:

So will Mander be punished for multiple speeches inciting war against Indian state?

It remains to be seen. The network of the left-liberal lobby in Lutyens’ Delhi is incredibly deep and they work at multiple levels. Their access to corridors of power, especially top echelons of judiciary in terms of getting expedited hearings, is something an ordinary citizen or any Hindu organisation can only dream about.

Mander and his daughter filed separate petitions in Delhi HC over Delhi riots and against ‘hate speech’ by BJP leaders, and managed to get a midnight hearing on 25-26 Feb with Delhi HC judge Ajay Muralidhar. Mander was represented by legal counsel Colin Gonsalves, another eminent member of the Lutyens’ cabal, in Delhi HC hearing.

Incidentally, Judge Ajay Muralidhar’s wife Usha Ramanathan (a legal activist most known for her opposition to Aadhar on privacy ground) has apparently collaborated with Harsh Mander on some issues, as can be seen from this joint address by the two of them on the issue of child labor at a JNU meeting.

On 26th Feb, Delhi HC bench of Justice S Muralidhar and Justice Talwant Singh noted in its order that the four speeches, made by BJP leaders Kapil Mishra, central minister Anurag Thakur, MP Pravesh Verma, MLA Abhay Verma, played in the courtroom by the petitioners “ex facie appear to answer the description of hate speech under Section 153 (a) and (b) of the IPC, both of which are cognizable and non-bailable”. The bench questioned why the Delhi Police had not filed FIRs against them for incitement of violence. At one point, the bench even got the court staff to play Mishra’s ‘hate speech’ video clip in the courtroom.

The Lutyens’ lobby raised a big hue & cry when Judge Muralidhar was notified on 26th Feb about his transfer to Punjab HC (facts such as this transfer being recommended by the SC Collegium on 12th Feb itself matter little to the cabal). The next  bench gave the Centre 4 weeks to respond to Mander’s petition, accepting the Govt. counsel’s argument that the situation is not conducive for taking any decision right now.

Mander quickly filed a plea in SC against HC’s decision giving 4 weeks to Govt. to respond – he was represented by another Lutyenite Karuna Nundy (this ‘progressive’ lawyer believes that criminalisation of instant triple talaq is against freedom of speech). At the same time, Colin Gonsalves (the same lawyer representing Mander in Delhi HC) filed another petition on behalf of 10 Delhi riot-affected victims.

Arguing in SC, Solicitor General Tushar Mehta, appearing for the Centre, said that the petition by the 10 riots victims are also at the behest of Harsh Mander. He also alluded to Mander’s incendiary speech to CAA protesters about not having trust in Supreme Court or Parliament, and claiming people on streets will have the final wordon CAA-NRC. Mander’s lawyer Karuna Nundy denied the ‘allegations’ after which Chief Justice of India (CJI) Sharad Arvind Bobde asked for the transcript of Mander’s remarks.

At the same time, CJI Bobde held that it “unjustified” for the HC to put off its hearing by four weeks, and asked it to advance the scheduled date of hearing to Friday and decide the requests for FIRs as expeditiously as possible.

As ordinary citizens, we can only wonder –

1.) Why Mander’s clip could not have been played in SC courtroom as was done for Kapil Mishra’s clip in Delhi HC? Why are Mander’s incendiary comments only allegations, whereas Kapil Mishra’s ‘hate speech’ has been ruled as “ex facie appearing to answer the description of hate speech”?

2.) When the new Delhi HC bench agreed to defer hearing on filing FIR for alleged hate speech by BJP leaders by 4 weeks, agreeing to centre’s contention that ‘situation was not conducive’ in light of charged emotions so soon after riots, SC called it ‘unjustified’ and asked the HC bench to hear the matter on Friday and decide asap. But another SC bench deferred hearing on Shaheen Bagh protests, one of the main triggers for Delhi riots when ordinary citizens saw a similar blockade being carried out in Jaffrabad, claiming ‘timing is not conducive’.