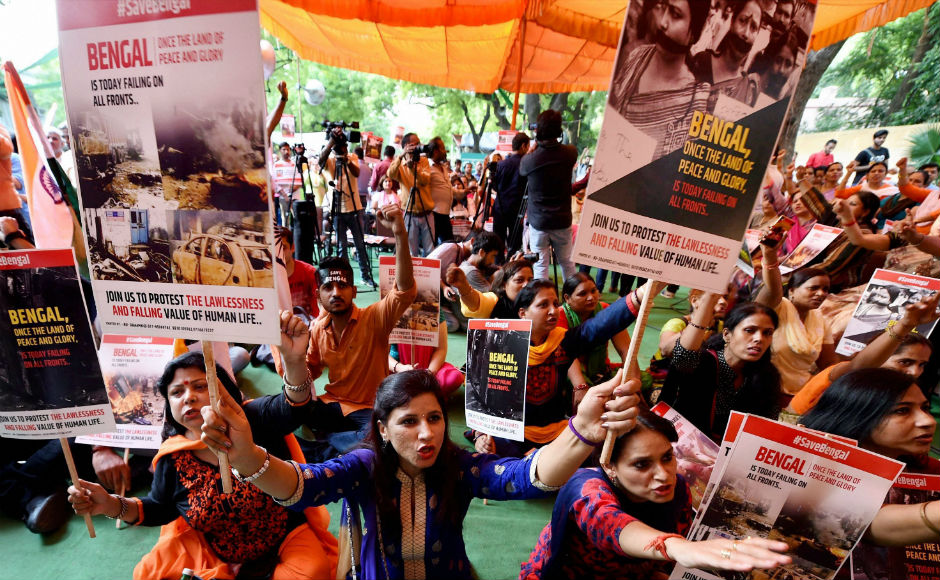 Protests were held yesterday in major cities against the failing law and order situation and violence against Hindus in Bengal. In New Delhi, the protests were held at Jantar Mantar and it was heartening to see Hindus standing for three long hours in the summer heat to show their solidarity with co-religionists from Bengal. However, I was disappointed to see the size of the gathering as it was very small as compared to the past gatherings organized by so-called secular people. Nevertheless, a good beginning.

Reporters from some of the media houses too had gathered there to cover the event. I was happy to see reporters from newspapers and TV channels on the protest site to cover the event, but very soon my happiness turned into disappointment as some of the media professionals started behaving in their usual self. They started asking questions that were not related to the Bengal violence and tried to shift focus from Bengal violence to Lynching. These reporters kept asking questions like Do you condemn Lynchings? Lynching is as bad as blah blah. Protesters were caught in the trap and answered in affirmative to the posed questions. They said, “We condemn Lynchings. Lynchings are bad, etc”.

There were groups holding placards and raising slogans “Mamata Banerjee resign do”, “Hinduaon pe atyachar nahi sahega Hindustan.” (Mamata Banerjee should resign; Bharat will not tolerate atrocities on Hindus). A reporter from one of the TV channels came to the group and said, “Are you people not communalizing the whole issue by raising slogans like Bangladeshis go back, Hindu-Muslim etc, etc?” Her questions evoked flurry of responses from the group members. I was standing very close to the group and they kept saying that it already is a communal issue, Ma’am. When Muslim mobs selectively torch Hindu houses, attack Hindu women and kill Hindus in Bengal, it is nothing but a communal situation, Ma’am.

I was quick to understand the game plan of the reporter and asked others standing there not to respond to questions on lynchings. Lynchings could be discussed at some other opportune time. But unfortunately, my voice was lost in the noise and I doubt if my words were captured by the reporter.  I wanted to tell the reporters that if they wanted to cover the Bengal violence sincerely, they should focus on the pain of Hindus, but could not.

As per reports and information provided by the people who spoke on the occasion, most of the Hindus who have suffered in Bengal violence are Dalits and OBCs. Yet, I could see no Dalit in the gathering to register the protest. Or there may have been few, but I could not find.

But I am suspect there may have been many Dalits in the “Not in my Name” campaign. After all, Muslims have been systematically trying to use Dalits to forward their cause. Many posters on the walls around Jantar Mantar area attest to the same. Posters put up by little known Dalit-Muslim Ekta Front speaks about Dalit-Muslim unity. Interestingly, such posters speaking about Dalit-Muslim alliance can be seen in numerous other cities too. Interestingly, the organizations that have put up these posters are headed by Muslims and are composed of mostly Muslims.

I wonder why Mayawati has so far not condemned the 2015 massacre of five Dalits by Muslims in Nadia, West Bengal or the recent rape and murder of a deaf and dumb Dalit girl? Why has no other Dalit organization bothered to condemn and raise their voice against the same? Above all, how can SC/ST commission remain quiet amidst such disquiet?

There are many glaring questions that come to one’s mind and these are: Why has no writer returned their awards over the situation in West Bengal? Why are “Not in my Name” activists hiding this time? Why is the Intolerant brigade basking in the shade? Perhaps, they are not healthy and don’t want to face Delhi’s scorching heat.

These obvious questions were on the top of protesters’ minds too yesterday, hence found expression in the slogans. I too have in the past called out the bluff of secularwaadis, but I think the seculars (read anti-Hindu forces) have been exposed a lot. Just focusing on their double-standards and asking them why they do cherry-picking is not going to take the movement forward. We all know they have their agenda and they would continue to pursue that, no matter what we say. Above all, asking secularwaadis to fight for us amounts to banking on an enemy to breach the fort.

Instead, Hindus should do serious reflection on how we have constantly failed to safeguard our interests. After all, how many Hindu writers thought of returning their awards when Kashmiri Hindus were killed and driven out of their homes? Of course, none. Similarly, how many Hindus took out a protest rally when Hindus in Kariana (U.P.) were driven out of their homes? Ok, if common Hindus were clueless, what about Hindu organizations?

Not in my Name campaign may have fizzled out, but not before achieving the desired outcome for which it was planned. It succeeded in creating ripples that caught international attention. The campaign also succeeding in dividing Hindu opinion over the issue of cow slaughter.

No matter how much we loathe secular activists, we cannot ignore their expertise to think out-of-the-box to push Hindus into the corner. All these years they carried out a faulty secular agenda in our name without seeking our approval, and yet could conceive of the campaign called “Not in my Name”.  Hindus may have found the art to choose the PM and CMs of their choice, but we have to learn a lot yet. Secularwaadis continue to deride us with campaigns such as Not my PM, No Yogi as CM, Intolerant India, so on and so forth. For a while, when the Intolerant brigade is quiet, we presume that things will be normal. We are grossly wrong to presume that they have lost their ability to hunt. In times of quiet, the Intolerance brigade is planning another campaign that would take Hindus by surprise. The answer to such schemes is not reaction, but proactive action. I leave it to the readers to think and come out with a plan.