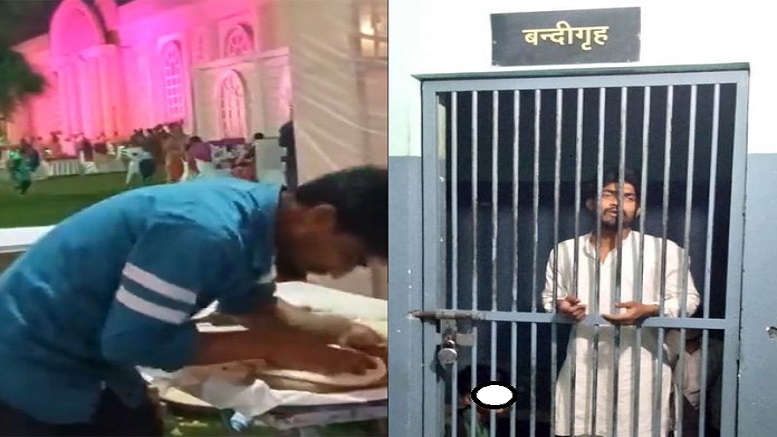 A cook named Naushad aka Sohail from Meerut who used to prepare rotis at marriage functions after spitting on them before feeding them to hundreds of unsuspecting customers was earlier booked under National Security Act (NSA) by the Uttar Pradesh(UP) police.

It is now being reported by UP-based news portal BreakingTube that the NSA charge against him was dropped after the accused approached the Ministry of Home Affairs (MHA), Government of Bharat. Naushad was then clandestinely released from jail on the 13th of last month and the news has made it out only now.

The original incident occurred on Feb 16th at Meerut and Naushad was caught on camera indulging in this disgraceful act. He was originally charged under sections relating to public nuisance and under sections of the Epidemic Act. When news of his serial spitting behavior became widespread, public outcry made sure that he was also charged under the more stringent NSA. Police had recommended the same to the district magistrate who agreed.

Back then, one of the guests saw the accused engage in spitting on the rotis, secretly filmed the act and posted it on social media.  It went viral and the Hindu Jagran Manch lodged an FIR against the youth. Naushad was arrested and charged immediately. He confessed that he has been making rotis for the past many years in the same fashion.

It seems Naushad had appealed against the NSA and the MHA after hearing the accused quashed NSA charges. On May 12th, the MHA Under Secretary, Meena Sharma informed both the jail authorities and the district administration about the exceptional decision and directed them to release Naushad, reports BreakingTube. He was released from jail the very next day. His release was kept confidential by the police and administration and only a few people were aware of this, until now.

Other charges against Naushad would still stand, one hopes.

It is not known if this done because the MHA felt NSA would not stand its ground in court, but the secrecy surrounding the release has raised eyebrows. It also raises questions about the UP police’s morale since they had publicized the arrest in February to raise awareness against such anti-socials.

Naushad is not alone – several such incidents of Muslim cooks and fruit sellers adding their spit to their eatable products have come to light. Clearly, an example needed to be made to send a stern message to such anti-social elements, especially during a raging pandemic. What Naushad did is nothing less than culpable homicide with an intent to infect hundreds. But once again, if the reports of MHA involvement in getting Naushad released are true, our system and secular state has shown that it lacks the will to strictly enforce the law of the land for the greater good.

In such a scenario, can we really blame common citizens for venting out their anger?

The Harmful cook who was seen spitting on rotis at a party has been caught by Meerut Police. Here he is produced before the family who had hired him. Unfortunately the beating isn't satisfying enough. But maybe offcamera treatment was more interesting. 1/2 pic.twitter.com/LPhOE1GO5T

In a properly functioning system, people would trust the system to act without the need for videos to go viral, organisations to protest and put pressure. Prompt, professional and impartial investigation of crimes followed by deterrent punishment is the cornerstone of effective law & order. If criminals know they will be severely punished more often than not, the incentive for crime will lessen. But such weak-kneed decisions will only embolden Naushad and others of his ilk to continue with their crimes against unsuspecting citizens.

Now, petty thief lynched by mob in front of police over ‘blasphemy’ in Kapurthala gurudwara: Punjab