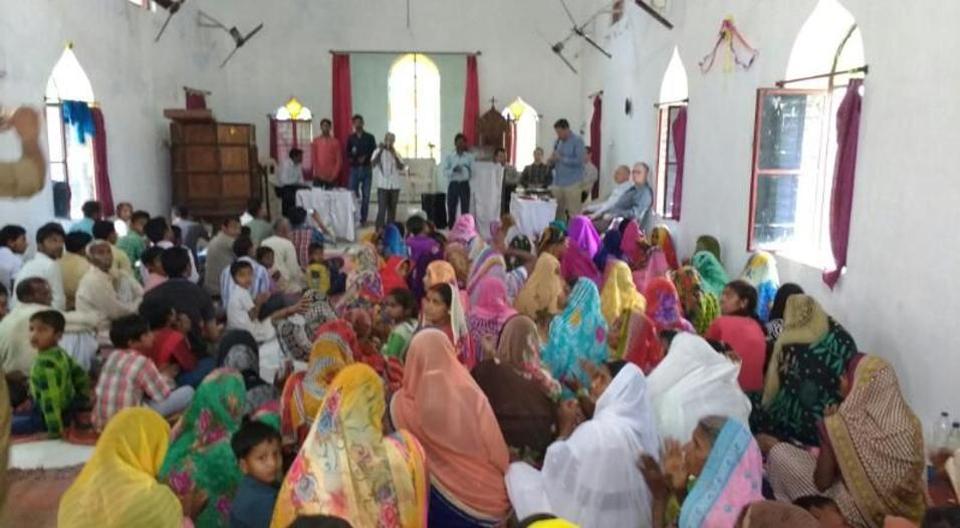 A mass religious conversion event in Milak (Rampur, UP) organised by Christian missionaries from Chennai and Delhi was stalled by police after Bajrang Dal workers reported the event to the authorities. The police dispersed the crowd and shut down the music being played at the venue.

Shivdesh, resident of Milak Walker Ali village, had asked for permission for an event by a missionary team which was denied by the police. Marquee and stage was built for prayers for the proposed event without the permission of authorities. A crowd gathered at the place since morning and music system was installed inside marquee for the ‘prayer assembly’. Priests and missionary teams from Delhi and Chennai had arrived to participate in the event.

Meanwhile, authorities were informed by the Bajrang Dal about mass conversion of 200 people to Christianity at this illegal gathering. The authorities reacted by sending police to the scene. Inspector Ajay Kumar Singh arrived at Milak Walker Ali village with police force and stopped the religious event and the prayer assembly. The police chased away the missionary team and dispersed the crowd. Some people at the assembly argued that they gathered just for the prayers and that the reports of conversion were ‘rumours’.

Allegedly, there was a confrontation between the Bajrang Dal workers and the missionary team at the Patwayi road of the city while the team was returning from the event on their vehicles. Leader of cow protection squad Mukesh Patel arrived at the tri-junction along with other workers.

Inspector in-charge Ajay Kumar says he got report of an event organised (without permission) in the Milan Waker Ali village. After which they arrived at the place where prayers were going on. The programme was called off since the permission was not granted and the people there too were dispersed. The police denied the reports of mass conversion.

Such incidents of mass conversion at illegal ‘prayer meetings’ are increasingly common in UP. In April this year, a similar event in Maharajganj district of Eastern UP, was stopped by police after being informed by activist group Hindu Yuva Vahini. Such conversion attempts have also been reported from other districts of UP and Bihar.

Strangely, conversion becomes a hot-button topic for English MSM and Lutyens’ only when ‘ghar-wapsi’ (the return of converts to Hindu Dharma) is involved, while ignoring the much larger, organized Western machinery at work to convert Hindus by branding them as ‘children of darkness’, luring them with false promises of eternal redemption or miracle cures of illnesses, or outright inducement through monetary and other benefits.

It is only the much demonized Hindu groups like Bajrang Dal, Hindu Yuva Vahini and others who ensure that this mafia faces some resistance.