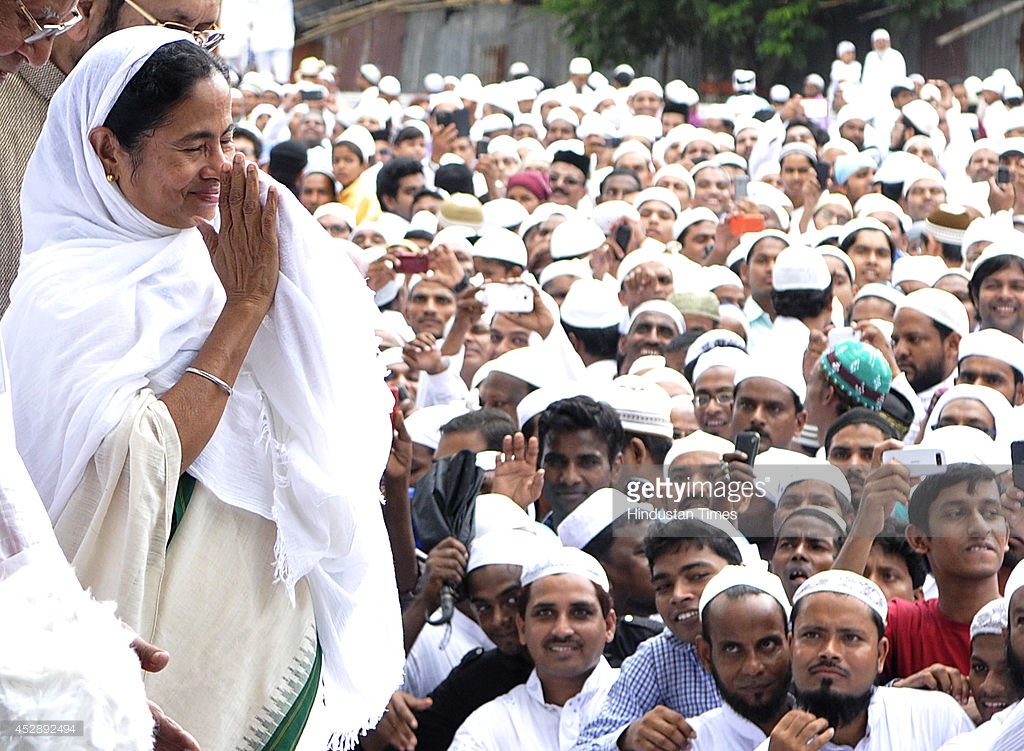 Taking oath for her second stint as Chief Minister of West Bengal, Mamata Banerjee departed from constitutional norms in taking the oath of office by saying, “I, Mamata Banerjee, do pledge by the name of Ishwar and Allah that I shall…” Following in her footsteps, a few other West Bengal ministers also took a similar pledge.

According to this news report –

“The practice of taking the names of both ‘Ishwar’ and ‘Allah’ during the oath of office is rather unusual and seems to be a departure from what is laid down in the Indian Constitution.

Schedule 3, Para V of the Indian Constitution mentions the oath of office for a minister for a state thus:

“I, A.B., do swear in the name of God/ solemnly affirm that I will bear true faith and allegiance to the Constitution of India as by law established, 1 [that I will uphold the sovereignty and integrity of India,] that I will faithfully and conscientiously discharge my duties as a Minister for the State of ……….and that I will do right to all manner of people in accordance with the Constitution and the law without fear or favour, affection or ill-will.”

Similarly, Schedule 3, Para VI states the oath of secrecy for a Minister for a State:

“I, A.B., do swear in the name of God/solemnly affirm that I will not directly or indirectly communicate or reveal to any person or persons any matter which shall be brought under my consideration or shall become known to me as a Minister for the State of ………………..except as may be required for the due discharge of my duties as such Minister.”

The different forms of oaths or affirmations for different offices — be it the President, Prime Minister, Chief Ministers of states or other ministers — are clearly prescribed in the Schedule 3, Part I of our Constitution and those, according to experts, are mandatory and inviolable.

According to a noted Constitutional expert Firstpost‘s Shishir Tripathi spoke to, it is not right to take liberties with the oath.

Interestingly, when Mamata Banerjee had taken the first oath of office as Chief Minister in 2011, she had stuck to the script.”

One wonders whether our secularism brigade will outrage over this unnecessary communalization & distortion of something as solemn as an oath of office. When the rules of secularism state that all ‘religions are equal’, what is the need to separately invoke the monotheistic God of Islam? And what about Sikhs, Jains, Buddhists and even atheists? If the idea is to honor the religious sensitivities of all communities, why are the Indic minorities ignored?

As was highlighted in an earlier HinduPost article, “In West Bengal, the share of Muslims in the population has risen by 7.5 percentage points since Independence and Partition; and, much of this accretion has occurred after 1971. Proportion of Muslims in the State was 19.5 percent in 1991 and 20.5 percent in 1971; it has reached 27 percent now. Their share before Partition was around or less than 30 percent. During Partition, this region did not witness as complete a transfer of populations as happened in the northwest; but Muslims still lost about one-third of their share. Much of that loss has now been made up, and the share of Muslims in the State is likely to soon reach the pre-Partition levels.”

Votebank politics is the explanation for Mamta Banerjee’s naked appeasement of Islamists in the state of West Bengal, and all signs indicate that Hindus of West Bengal are in for another grim 5 years.