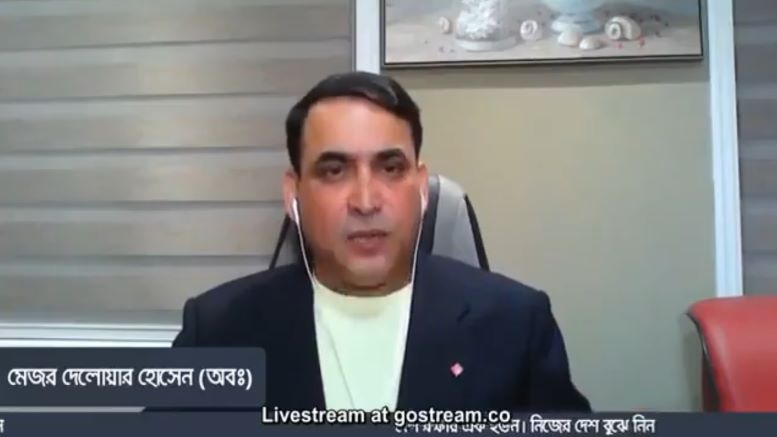 A live video speech by an exiled Bangladeshi Major Delwar Hossain which was cheered by radical Islamists is proof enough that Muslim Ummah comes ahead of any other identity for Islamists across the world. And this Ummah is what has always prompted Bangladeshi Islamists to hate Bharat and Hindus.

This despite the fact that it was Bharat that played a pivotal role in liberating East Pakistan from Pakistan to make it an independent country, Bangladesh. Radical elements in the country have always been and still continue to be ungrateful towards Bharat, as is evident in the speech of Hossain.

The video which surfaced recently shows the Bangladeshi Army ex-Major Delwar Hossain, ranting against Bharat and Hindus. The 19 minute-long video shows how ungratefulness and treachery come naturally to Islamists. It is high time Bharat puts pressure on Bangladesh to end the relentless persecution of Hindus and to rein in the Islamic fundamentalists who are continuously hate-mongering against minorities.

While Hossain is reportedly living abroad and connected with the opposition BNP-JeI (Jamaat-e-Islami) alliance, it is important for Hindus to note the kind of genocidal thinking which an ex-Army man holds.

Through his video, he asks his audience to make a list of all such people in Bangladesh. He is set to launch a website soon, through which his audience can report about ‘Bharatiyas in Bangladesh’ or ‘Bharat-loving Bangladeshis’ (note: these are nothing but dog-whistle references to Bangladeshi Hindus, who are casually accused of being loyal to Bharat).

Swearing in the name of Allah, he declares that he will take the help of Bangladesh police and army to make sure that the ‘Bharatiyas’ (read Hindus) are thrown out of Bangladesh. The 15 to 20 lakhs job vacancies or opportunities created after the targeted people are evicted from the country will be occupied by “patriotic Bangladeshis”.

Then he targets that segment of Bangladesh media that projects a positive image of Bharat. On the other hand, he demands that all the journalists who are in exile due to their Islamist leaning should be brought back to Bangladesh and given the charge of running the media of their country. He requests the people of Bangladesh to boycott the liberal media houses and declares that these media houses will be set afire in the times to come. It must be noted here that even the current Sheikh Hasina govt. is no champion of a free press and often cracks down on independent media which reports unpalatable facts about Bangladesh’s treatment of Hindus and other minorities.

Hossain also says that he plans to form a non-political organization that would monitor the democratically elected government and assures that they work according to the whims and fancies of Islamists like himself. Without naming anyone, he proceeds to slam the leading political families of Bangladesh for failing as leaders. Major Delwar Hossain appears to be an ardent follower of another Hindu-hater Dr. Zafrullah Chowdhury  who had recently made headlines for passing derogatory comments on Hindu epics like the Mahabharata and Ramayana. He encourages the people of Bangladesh to adulate and follow him.

He claims that there are agents of the Bharatiya intelligence agency RAW planted in various parts of Bangladesh and asserts that many Bangladeshis are also aware of it. In his clarion call to his audience, the Major commands them to identify and report such ‘RAW agents’ to him and promises that he will “bundle up the RAW agents and take them to task”. If this is not a call for genocide and cleansing of Hindus, we don’t know what is.

His anti-Hindu and anti-Bharat diatribe has earned him popularity and following among radicalized Muslims. There is not much information available about this major in the public domain, but it appears that he is employing Hindu-hate to secure backing to enter the Bangladeshi political scene.