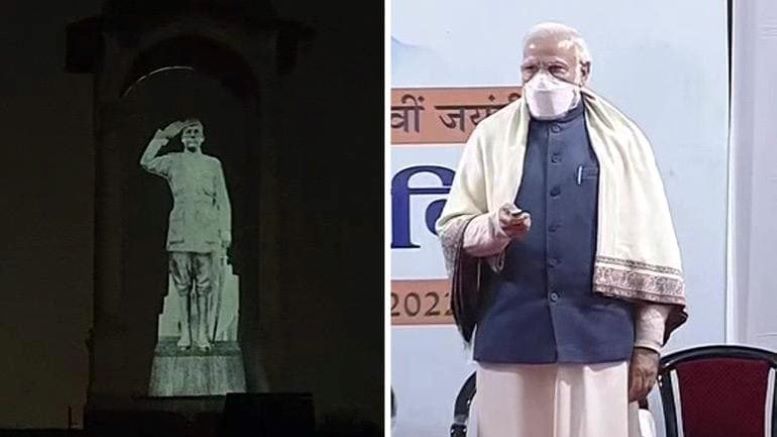 PM Modi’s unveiling a hologram of the granite statue of Netaji Subhash Chandra Bose to be installed at India Gate appears to have touched a raw nerve of the liberals who have launched a campaign to malign the freedom fighter.

Liberals like Tunku Varadarajan, US-based brother of The Wire‘s Siddharth Varadarajan and son of an ex-IAS officer, were of the opinion that India Gate is about to be ‘sullied’ by a statue of ‘Hitler’s friend’.

This line of argument is faulty because as one Twitterati pointed out the UK celebrates Churchill despite the fact that he allied with Stalin who is known for having committed several unspeakable horrors. The limited point here being decisions should be judged in the light of the prevalent situation. At that time, Netaji opted for the most viable option that would enable him to free Bharat from the clutches of the Raj.

After all, isn’t it natural for Bharatiya people to first fight the evil which had enslaved them in their own home, rather than worry about the threat posed in far away Europe? How much longer will the Euro-centric view of history be imposed on people of the world?

However, it is probably too much to expect from the likes of Varadarajan to understand the decisions of Netaji because their understanding of Bharat is limited to that propagated by western liberals.

Tunku Varadarajan is a representative of the old Lutyens’ elite, who cannot stomach their worldview and liberal assumptions being challenged by ordinary Bharatiyas. A Twitter user explained it well:

It was informative to see both White liberals and their brown desi counterparts exhibit the same ignorance about what Netaji means for Bharat. The Western colonial gaze and notions about the Anglosphere’s superiority are so deeply embedded in the English-language media, that its professionals often wear this bias as a symbol of pride!

Myra MacDonald, a Scottish journalist and author who has worked as India bureau chief for Reuters, tweeted that “India has always had an ambivalent (sic) attitude to Subhas Chandra Bose” and found the proposed Netaji statue in New Delhi as a ‘dangerous move’. Dangerous for whom, we ask, or is this an implied threat to a Bharat seen as challenging the Anglosphere-defined narrative around its freedom struggle?

In her second tweet, MacDonald came across as an apologist for British colonialism by warning Bharat against ‘decolonisation agenda’. Like most lazy Western analysts talking about Bharat, she made yet another laughable attempt to brand PM Modi as a ‘dictator’, this time through the Bose-Hitler link.

For the record, even Indonesia’s iconic freedom fighter Sukarno welcomed the Japanese invasion of his country to defeat the Dutch colonialists. However, after WW II ended and the Japanese left Indonesia, the Dutch tried to reassert their control over their former colony, and were aided by the British who even sent the British-Indian Army to suppress the Indonesians. So much for colonialism as a ‘force of good’ – all colonized nations were perfectly entitled to use whatever option they had at their disposal to free themselves.

And the Anglosphere’s continuing warm relations with military-theocracies like Pakistan and outright dictatorships in Middle-East show that all its recent finger-wagging at Bharat for not being ‘democratic enough’ is just so much humbug!

And then we have the likes of Times of India editor Manimugdha Sharma regurgitating MacDonald’s thoughts with a ‘secular’ twist. For him, Bose was good for his ‘secularism’, but not good for the thing which defines Bose to this day – leading the Indian National Army to fight rapacious British colonial rule, even if it meant allying with ‘fascist’ Axis powers.

The only line of argument taken by members of the liberal cabal was Netaji allying with Hitler while conveniently sidetracking the fact that it was the military campaign launched by Bose through the INA (Indian National Army/Azad Hind Fauj) that forced the British to subsequently withdraw from Bharat rather than the often romanticized ‘freedom through ahimsa’ argument.

Bharat’s struggle for independence has been reduced as a contribution of just Gandhi and Nehru while the British themselves held the opinion that Gandhi’s contribution was minimal. Then British PM Clement Attlee admitted that the role played by Netaji’s INA was instrumental in the British granting independence to Bharat. Attlee made this revelation to Bengal’s acting governor Justice PB Chakraborty.

A FirstPost article highlights this:

Recalling his interaction with the British prime minister, Justice Chakraborty said: “My direct question to Attlee was that since Gandhi’s Quit India Movement had tapered off quite some time ago and in 1947 no such new compelling situation had arisen that would necessitate a hasty British departure, why did they have to leave?” To this Attlee cited several reasons, foremost being “the erosion of loyalty to the British crown among the Indian Army and Navy personnel as a result of the military activities of Subhas Chandra Bose”.

Justice Chakraborty had a point. After all, the 1942 Quit India movement was easily crushed by the British. In fact, after the initial successes, the Gandhian satyagrahas failed to stun and stupefy the authorities, who had by then perfected the art of handling Gandhi and his men. At the very first sight of an agitation, the British would swoop down upon the entire Congress leadership, put them behind bars, and let them warm the prison till the protest peters out on its own! It was a comfortable setup for the colonial government and it would have endured had it not been for people like Bose…

…Such has been sympathy and support of Netaji and his INA men that in 1946, the Intelligence Bureau — the agency that had spied on Indians since 1985 — said that “there has seldom been a matter that attracted so much Indian public interest and, it is safe to say, sympathy”. Even Gandhi, his long-time bete noire, couldn’t stop himself from saying: “If Bose had hypnotised the INA in 1943, the hypnotism of the INA has cast its spell upon us.”

Commander-in-Chief of British Indian armed forces General Claude Auchinleck had reiterated this when he pointed out the popularity of INA among the masses in his November 24, 1945 letter to Field Marshal Viscount Wavell. That British mole Hari Badhwar, who switched sides from Congress to INA, and subsequently testified against INA men in the Red Fort trials, was rewarded by the Congress in independent Bharat is certainly a matter of shame. “It is a great shame that Badhwar should have led a comfortable life as a general in free India,” writes author Anuj Dhar who has worked extensively on Netaji.

The Modi government’s decision to dedicate a statue at India Gate to Netaji is an attempt to correct the historical wrongs and also recognize the contribution of the INA in ensuring that Bharat gains independence from the Raj.

The Bharatiya Navy tableau at this year’s Republic Day parade is also set to celebrate an unsung episode of our history by depicting the 1946 Naval revolt that shook the British Empire just a year before Bharat was granted freedom. The revolt of the Royal Indian Navy was triggered by the quality of food but soon escalated into a mutiny as sailors took control of shore establishments and ships.

Gripped by nationalistic fervor, sailors refused to obey the command of their British officers. The mutiny that began in Bombay spread to the major harbors across the country in addition to the Naval mutineers getting support from students and industrial workers including many government employees who went on a strike to support them. The revolt not just lacked the support of the political leadership of the time but also had no leadership from within leading to the submission of the sailors to the British.

This event, however, shook the British who realized that they could no longer rely on the loyalty of the Bharatiya soldier. The event, thus, made a significant contribution towards the British decision to leave Bharat culminating in the complete independence of the country in 1947.

The present government is also trying to break free of the colonized mindset as is evident from the removal of the Christian Anglican funeral hymn ‘Abide With Me’, which has been a fixture in the Beating Retreat ceremony since 1950.

Abide With Me has reportedly been replaced by Kavi Pradeep’s seminal piece Aye Mere Watan Ke Logon, which was written in the wake of the Sino-Indian War, and went on to become a tableau of Indian nationalism. It is high time we moved away from colonial practices and mindset and returned to our roots, isn’t it? After all, Bharat is an independent nation.

“The chickens have come home to roost” – Illiberal wokes now target their masters!