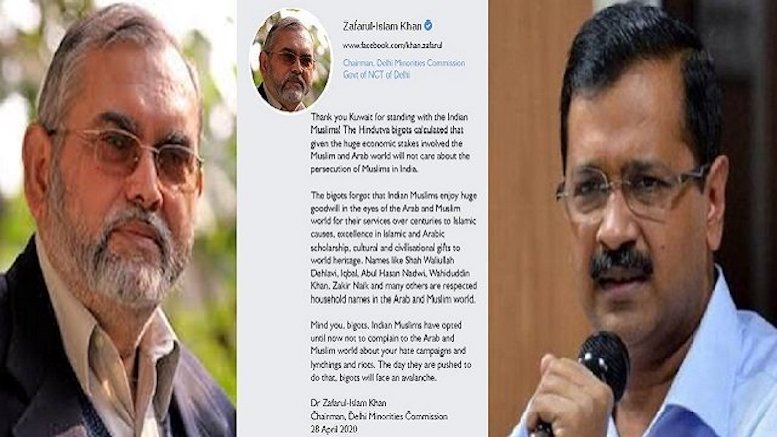 Delhi Minority Commission (DMC) Chairman Zafarul-Islam Khan has posted a disturbing message on Facebook. Thanking Kuwait for ‘standing with’ Indian Muslims, he reminds ‘Hindutva bigots’ that the Arab and Muslim world cares about the ‘persecution’ of Muslims in India over and above any economic stakes. He ends his message with a veiled threat – “the day Indian Muslims complain to the Arab and Muslim world, you will face an avalanche.”

Recently, many Hindu NRIs living in the Middle East & Gulf region have been hounded, sacked from their jobs, some even arrested for alleged anti-Islamic remarks on social media. A cabal of Indian Islamists, liberals, Pakistanis, and Indian Muslim journalists working in Gulf have carried out this operation in a targeted manner – often twisting remarks made by Hindus, in favour of CAA or in criticism of Tablighi Jamaatis criminal behavior during Covid-19 pandemic, out of context and reporting them to employers and authorities in the Gulf.

Some Arab voices also started raising their voice against ‘rising Islamophobia in India’, and Islamists from Pakistan and India used fake social media accounts to add fuel to fire. Earlier, Kuwaiti cabinet had issued a note on 3 March asking the Saudi-based Organisation of Islamic Cooperation (OIC) to put ‘pressure on India’ to stop the “Islamophobia” against its minorities. And the OIC duly acted upon it. The irony of such concerns being raised by theocratic Islamic countries where minorities are officially discriminated against, was not lost on anyone. Anyhow, a round of diplomacy later, Oman, Saudi Arabia, Qatar and Kuwait have all officially reiterated their deep commitment to friendly ties with Bharat.

But Indian Islamists like Khan and their left-liberal partners are treating the whole episode as a ‘victory’ for the pan-Islamic world over a ‘kafir’ nation, and as a warning to Hindus.

Who is Dr Zafarul-Islam Khan?

As per his biodata on the DMC official website –

“Dr. Zafarul-Islam Khan is a senior journalist, scholar and author of over 50 books in English, Urdu and Arabic. He studied in India, Egypt and UK. He worked in Egypt, Libya and UK. He was the Chief Editor of The Milli Gazettee from its inception in January 2000 to December 2016. He was President for three terms of the All India Muslim Majlis-e-Mushawarat (AIMMM), the umbrella body of Indian Muslim organizations. He organized a number of international conferences in London and Delhi including the International Dialogue between Islam & Oriental Religions in February 2010 at Delhi which was inaugurated by Vice-President Mr. Hamid Ansari. Dr. Khan frequently appears on top Indian and foreign TV channels on issues related to the subcontinent and the Muslim World.”

In short, Khan is a well-read and educated person. He assumed the Office of the Chairman of Delhi Minority Commission on 20 July, 2017, a post which has a 3-year term. This is a statutory quasi-judicial post with powers of a civil court trying a suit. The salary, official car and other perks are equivalent to that of a secretary level IAS officer.

As this article informs –

“Khan’s post on Tuesday was not an exception as the DMC chief has been consistently tweeting in a manner that gives a peep in his thought process. He had been a vocal supporter of the Tabligi Jamaat, calling the prolonged quarantine of the Jamaatis as “illegal detention” and supportive of CAA protests. He also gave a call to “all freedom-loving and godi-media-hating citizens to boycott IndiGo, Air India, SpiceJet and GoAir until they lift the ban on Kunal Kamra”.

In one post he takes on Uttar Pradesh chief minister by saying, “Yogi Adityanath who leads an illegal militia Hindu Yuva Vahini which terrorises people in eastern UP is running UP like a fief” and his rant goes on.

The question is whether Khan who heads a statutory quasi-judicial body and thrives on taxpayers money be allowed to publicly pronounce his hateful feelings and get away with that.”

Incidentally, the concept of minority commissions was created by Congress-led UPA to further their vote-bank politics and deepen existing social fault-lines.

In his traitorous & seditious post, Khan is keen on proving his loyalty to Arab and Muslim world. He claims, “Indian Muslims enjoy huge goodwill in eyes of Arab and Muslim world for their services over centuries to Islamic causes, excellence in Islamic and Arabic scholarship, cultural and civilisational gifts to world heritage.” Sadly, the second class treatment meted out to all subcontinental Muslims in the Arab world show how delusional Islamists like Khan are.

Waliullah was of the opinion that Indian Muslims must consider themselves primarily as a part of the larger Muslim world and launch a vigorous campaign against Hindus. It was he who carried forward his father’s legacy of launching a holy war against Marathas by inviting Afghan Ahmad Shah Abdali to invade Bharat and ‘save’ the Timurid Empire.

Zafarul-Islam Khan obtained his school education at Madrasa-tul-Islah, a madrassa in Azamgarh, and Darul Uloom Nadwatul Ulama, Lucknow. Later he studied at Al-Azhar in Cairo, Egypt, regarded as as “Islam’s most prestigious university”. In 2014, Al-Azhar’s lady Professor of Theology Suad Saleh had said that in a legitimate war, Muslims can capture enemy women and have sex with them like slavegirls.

This man occupying a senior Constitutional position in Bharat is threatening to invite foreigners to avenge ‘crimes against Indian Muslims’, in a post made in official capacity. The chairman of the Delhi Minority Commission is nominated by the Delhi government. So the question is why has Delhi CM Arvind Kejriwal not sacked him yet, why haven’t courts taken suo-motu notice, and why hasn’t police started legal proceedings against Khan for high treason?

PFI had branches in the Gulf under different names