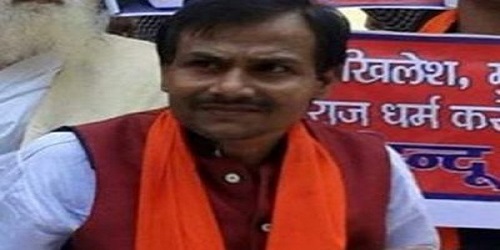 Hindu leader Kamlesh Tiwari (44) was murdered yesterday in his Lucknow home by 2 men who allegedly had tea with him before shooting & stabbing him to death.

Gujarat ATS (Anti-Terrorism Squad) has detained at least 3 suspects – Rashid, Mohsin and Fazal – in Surat, who according to police, were involved in planning Kamlesh Tiwari’s murder. The Gujarat ATS has claimed that the persons who are in their custody had planned the whole thing. Two more people were involved in executing the murder in Lucknow who are currently on the run. However, there has been no official confirmation on this as yet by UP police.

The two persons who carried the shootout in Lucknow on Friday are believed to have brought the gun in a sweet box. The sweet box with a Surat shop address on it was reportedly recovered from the crime scene.

Based on a complaint by Kamlesh Tiwari’s wife, Kiran, UP police has also lodged a case against Maulana Anwarul-Haq and Mufti Naeem Kazmi who in 2015-16 had announced a reward of Rs 1.5 crore and Rs. 51 lakhs respectively to anyone who beheaded Tiwari for his allegedly derogatory comments against Islamic Prophet Mohammed.

Incidentally, Maulana Anwarul Haq, the head Imam of Jama Masjid in Bijnor UP, has also been booked for raping a woman. “Kamlesh Tiwari, let me warn you – whether you are in jail or outside, if the courts do not punish you, Muslims of Bharat will mete out their own punishment,” was the threat made by Maulana Anwarul Haq.

As per UP DGP Om Prakash Singh, UP police has uncovered several leads based on CCTV footage, call records and other evidence. The two suspected murderers, wearing saffron and red colored kurtas were captured in CCTV footage, along with a woman who is also being treated as a suspect by police.

It is reported that a police guard posted outside Kamlesh Tiwari’s two-storey house intercepted the two men, and let them through only after confirming with Tiwari. Kamlesh asked the two men to come upstairs, and asked his wife to make tea. He sent his son Mridul and a servant on some errand, and when the son came back he found his father lying in a pool of blood on the ground.

In October 2017, Gujarat ATS had arrested two IS operatives Ubaid Ahmed Mirza and Mohammed Kasim Stimberwala who had revealed during interrogation that Kamlesh Tiwari was on their hitlist. Kamlesh Tiwari had himself tweeted on 13 October that despite such imminent threats against him, he was not being given adequate security by the central and state administrations. 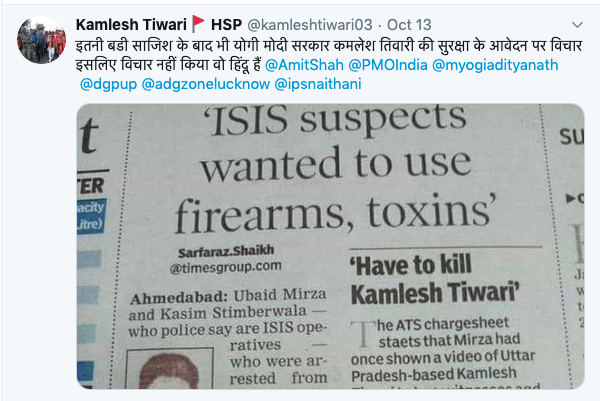 An year back too, on 13 October 2018, Kamlesh Tiwari had questioned why SP leader Shivpal Singh Yadav was given Z-category security by the Yogi Adityanath administration, whereas the very real terror threats against him were being ignored – 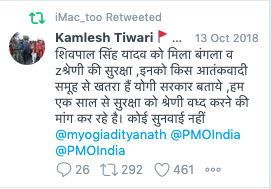 Kamlesh Tiwari was earlier with the Hindu Mahasabha, but had recently launched his own party, Hindu Samaj Party, which had shown good growth in a short time. After his alleged remarks against Mohammed in Dec 2015, the Samajwadi Party-led UP Government had kept him in jail under the draconian NSA (National Security Act) for close to 1 year, including time in solitary confinement. In an exclusive interview to HinduPost after his release, Tiwari had spoken about how BJP needed to guard against pseudo-secularism and safeguard Hindu interests.

Meanwhile, English-language media is busy trying to trivialize the murder by claiming it to be “purely criminal” and reporting Kamlesh Tiwari as a ‘fringe’ leader. But when a ‘fringe’ journalist like Gauri Lankesh who spewed vitriolic, anti-Hindu venom in some fringe Kannada newspaper was shot dead, the same media went ballistic for days on end.