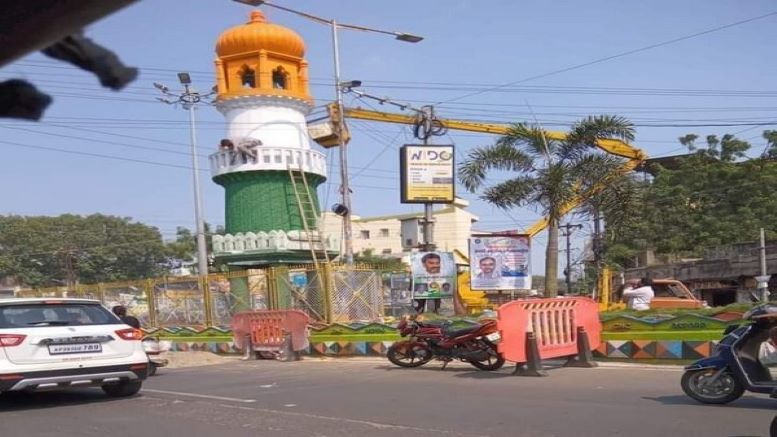 Jinnah Tower in Andhra Pradesh’s Guntur has now been painted in tricolor and arrangements are reportedly being made to hoist the national flag atop the tower.

“On the request of various groups, it was decided to decorate the tower with the tricolor and to construct a pole to hoist the national flag near the tower. Necessary arrangements will be made to hoist the National flag at Jinnah Tower”, Guntur East MLA Mohammed Musthafa has been quoted as saying by news agency ANI.

The YSRCP MLA even claimed to “live as Indians & loving the motherland”. Despite such claims, it would be worth pointing out that the move to paint the tower in and hoist the tricolor comes after Hindu groups protested.

Importantly, that it takes a protest to get politicians like Musthafa to act indicates the kind of nationalism professed by him and others of his ilk. Not just politicians but several Muslim bureaucrats have also displayed an attitude of disrespect towards national symbols. Recently, Jharkhand Jamtara District Collector IAS officer Faiz Aq Ahmed Mumtaz refused to salute the Bharatiya national flag when the national anthem was being sung during the Republic Day celebrations.

It may be recalled that on Republic Day this year, members of Hindu Vahini were manhandled and detained by the Guntur police when they attempted to hoist the tricolor at the Jinnah Circle’s tower named after Mohammad Ali Jinnah.

As the video of the incident went viral on social media, citizens questioned the action of the Guntur police and demanded to know as to why there was a place named after the man who got Bharat divided into communal lines.

It has been a long-standing demand of Andhra Pradesh and Telangana BJP members to rename the circle after freedom fighters rather than after Jinnah who got the nation divided. Furthermore, the police action against citizens for celebrating the nation’s Republic Day by hoisting the national flag was both deplorable and insensitive.