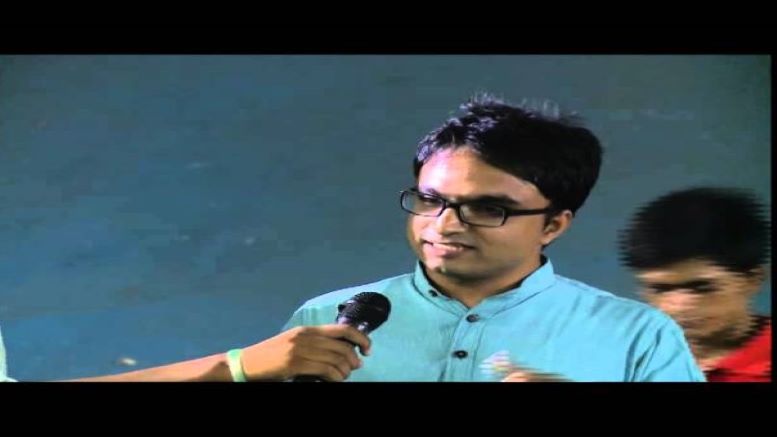 Jharkhand Jamtara District Collector IAS officer Faiz Aq Ahmed Mumtaz refused to salute the Bharatiya national flag when the national anthem was being sung during the Republic Day celebrations on January 26 this year.

In the video of the event shared on social media (SM), it is clearly visible that even as others present salute the tricolor during the singing of the national anthem, Mumtaz doesn’t follow suit.

The DC has, however, tried to defend himself by sharing photos of him saluting during the function, but there is no clarification as yet on why he did not salute like all other officers assembled when the national anthem was being sung. As is evident, he was clearly not saluting while the national anthem was being sung (in fact, he appears not to be singing the anthem at all), and has conveniently posted other photos taken later during the same function, after he was called out on social media.

Rabindranath Tagore, the composer of our national anthem, had explained about the divine force we hail in the anthem – “I pronounced the victory in Jana Gana Mana of that Bhagya vidhata [god of destiny] of India who has from age after age held steadfast the reins of India’s chariot through rise and fall, through the straight path and the curved. That Lord of Destiny, that Reader of the Collective Mind of India, that Perennial Guide..”

It is a well-known fact that Islamists have an issue with the country’s national song Vande Mataram or raising slogans celebrating Bharat Mata. Their issue with the national anthem is lesser known, but follows the similar pattern of Islamic fundamentalism trumping all else.

When Islamists like Waris Pathan from AIMIM refuse to say ‘Bharat Mata ki Jai’ (a chant that is similar to ‘Long Live Mother Russia’ or ‘God Bless America’), liberal elites like ORF’s Manoj Joshi come to their defense rather than take them to task for putting their Islamist views before the common sense of nationhood.

The IAS association has also maintained a convenient silence on the Jamtara DC’s dubious act, just like they have stayed silent for so long on senior IAS officer Mohammad Iftikharuddin of Uttar Pradesh cadre who was caught on camera urging a group of Muslims to spread Islam all over the world.

In the videos, the IAS officer Iftikharuddin was seen proselytizing:

In the first part, Iftikharuddin is heard talking in Urdu and English, “Tell everyone in the world. He (Mohammed) is the Rasool for all…tell mankind, for TOTAL mankind, not a single has been spared. …Who will do this work (of dawah)? Those who believe in Allah. Take the mission forward. He established Allah’s kingdom. It was initially established in Arab (Saudi), but Allah’s deen (faith) has to spread everywhere, his nizam (order, system) has to enter every home. And how will it reach? Through people like you who want to do this work. If you do not, then Allah will catch hold of you.”

There have been startling revelations about Zakat Foundation, an Islamist ‘charitable’ organization with questionable links providing IAS coaching to Muslim students which essentially means more officials with Islamist mindsets entering the bureaucracy. It is not known if Faiz Aq Ahmed Mumtaz is a product of coaching provided by Zakat Foundation.

It is neither desirable nor expected of IAS officers to put their religion above the nation. While liberals might come up with excuses to defend such acts, it is a matter of concern when bureaucrats put their religious beliefs over national symbols.