Students Caned in Kishtwar, J&K for Defending The National Anthem 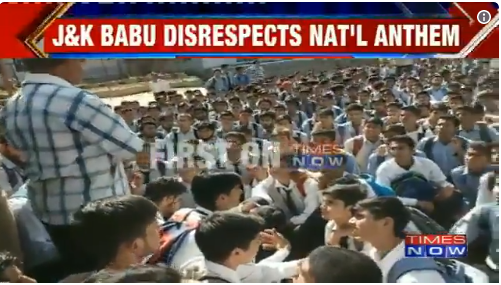 A shocking incident of school students being caned by policemen accompanying a Govt. official Mohd Syed Khan, has come to light from Kishtwar, J&K. The students were raising patriotic slogans after Khan disrespected the national anthem and abused school teachers.

The Pioneer has filed this report on the matter –

“A random inspection of a Government school premises by an Assistant Commissioner, Revenue in Kishtwar on Thursday triggered tension in the area after he exchanged ‘hot words’ with the school authorities and they in turn accused him of insulting National Anthem.

The situation turned ugly and apparently went out of control as large number of schoolchildren started shouting patriotic slogans against the Government officer.

The local police authorities along with senior school teachers tried to safely escort the government servant to prevent any scuffle in the school premises. Presence of policemen in the school premises created commotion among the students as they ran for cover to escape any harsh police action.

According to eyewitness reports, “Soon after Mohd Syed Khan, Assistant commissioner (Revenue), Kishtwar arrived in the Government Model Higher Secondary School (Boys), Kishtwar morning assembly was going on in the school premises”. Instead of standing in attention while National Anthem was being played he along with his security guards entered the office of school Principal to check the attendance records.

A senior school teacher informed the senior officer to wait for some time as morning assembly was going on in the school premises”.

School Principal Prahalad Bhagat told The Pioneer, “As i arrived in the school premises i tried to convince the Assistant Commissioner (Revenue) to be a little patient but instead of listening to our pleas he exchanged ‘hot words’ with us”.

Principal said, the school teachers were in no mood to disobey the senior officer but he was not ready to listen and used foul language while displaying his ‘arrogance’. The children waiting outside the compound became restive and started sloganeering.

According to eye witness reports, “In the commotion, some policemen hit few children with batons to disperse them as they were shouting slogans”. A school teacher was also injured while Principal tried his best to prevent cane charge on school children.

SSP Kishtwar Abrar Ahmed told The Pioneer, “no lathicharge was ordered on the school students inside school premises”. He said station house officer of the area had received information from school authorities and some policemen went there to sort out the issue and restore order.

Assistant Commissioner (Revenue), Kishtwar, Mohd Syed Khan was not available for comments and his mobile phone was switched off”

Kishtwar is one of the northern districts in Jammu region of J&K, and Muslims constitute 57.75% of the district’s population as per Census 2011.

Last year, there was a brutal crackdown by J&K police on non-Kashmiri students at NIT (National Instititue of Technology) Srinagar after the non-Kashmiri students hoisted the tri-color and demanded action against local students who had celebrated Bharat’s defeat in a cricket match and shouted anti-national slogans.