An illegal slaughterhouse functioning deep in the heart of Kodipalya village in Karnataka’s Ramnagar district where 200 new-born calves are slaughtered daily was raided on Tuesday by animal activists and police officials from Kudur Police Station. An India Today reporter was also present on the site and filmed the entire raid.

The Deputy Superintendent of Police (DSP) had initially refused to give police protection to the animal activists to enter the slaughterhouse. He said there was not enough force available and entering this slaughterhouse will cause a ‘law and order situation’. But he confirmed that police force would be provided on the next day for the raid. On the day of the raid, two unarmed policemen were provided to accompany animal activist Joshine Anthony and the India Today reporter to visit the alleged crime site. 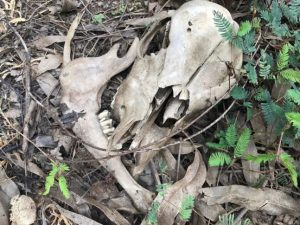 After an intense search operation, the calves were finally found within the slaughterhouse premises hidden underneath low lying trees and inside dense bushes. Mouths of these newborn calves were tied to their feet to ensure that they could neither run nor make any noise. A total of 71 calves were recovered and rescued. 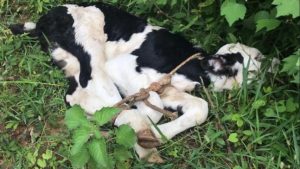 On seeing the calves being rescued, an angry mob started gathering outside the slaughterhouse in front of police officials. India Today reporter tried to ask the people who had gathered near the slaughterhouse about their side of the story but he was thrashed by the meat mafia goons and stones were pelted at him. Also, his phone broke and the goons threatened him. All of this happened in front of the police officials and was caught on camera.

An FIR has been lodged against seven accused identified as Gazipeer, Khasi, Syed, Mubarakhan, Noor, Imthiaz and Tabrez, all hailing from Ramnagar district, Kudur Police Station under IPC sections 428 and 429 (mischief by killing or maiming animal). Although there was no FIR registered for the attack on the journalist.