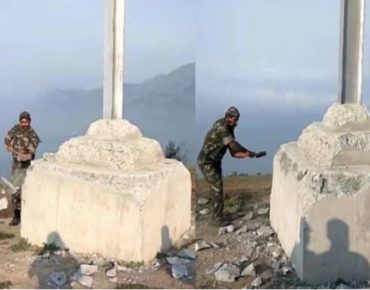 The Church in India is reportedly the largest landowner in the country after the federal government. Large grants under British rule have ensured that churches have land holdings, worth billions of rupees, in every city center. Yet, one finds many cases where Church organizations have illegally taken over lands of Western ghats through various encroachment activities, including planting of crosses in the ghats.

Recent developments brought the issue to mainstream when Sriram Venkataraman, a young IAS officer stirred protests in the area and even a public threat from controversial Kerala minister MM Mani, when he moved to demolish a large cross planted on Government land in Munnar, Idduki district, as part of a large demolition drive against encroachers.

The the 25-feet tall cross was planted in the area by a radical Christian organization named ‘Spirit in Jesus’. Authorities said that the religious group had encroached more than 120 hectares of land in that village in the guise of spiritual tourism. The team also removed a number of temporary sheds that had come up on revenue land. This is the revenue department’s third attempt at razing down the cross. Protesters had prevented the officials during the previous two attempts.

Tom Zachariah, the founder of Spirit in Jesus church, was booked in connection with the erection of the cross.

As per reports, Spirit in Jesus church has bizzare aims like calling down souls of dead persons to earth, to calm them down and free them of sins. The organisation claims that God has assigned them their current mission as, currently, there are no qualified persons in the Church for the purpose. The organisation has been spreading their agenda through their facebook page and website.

Issuing a statement over this issue, the organisation has stated in their Facebook page that the cross at Pappathichola which has been the reason for this controversy did not belong to them, and the land on which the cross was situated belonged to a person called Marian Soosey. However, they also claim that the particular cross had mystical powers and the sun used to dance around it. As per this news report –

“Meanwhile, representatives of Spirit in Jesus said that they will move legally against the government for demolishing the cross. Terming the demolition of a religious structure as “brutal than ISIS terror,” a representative TS John said, “We welcome the chief minister’s statement. We want the government to reinstate the cross at the same place for which we will take necessary steps. Else, we will begin a strike until our demands are met.”

He also maintained that the cross was not erected on encroached land and said that it was over 80 years old.

A day after revenue department officials razed down the cross, another wooden cross had appeared at the spot the next day. However, representatives of Spirit in Jesus claimed no role in the same and said that it was a conspiracy against them.”

CPM is known for turning a blind eye to evangelists and Christian fundamentalist teachings, while they denigrate Hindu Dharma and Hindu beliefs. Globally, Marxists claim to be atheists and Mao had once said ‘religion is the opium of the masses’, but in Bharat, the communists don’t mind allying with Christian fanatics and Islamists against the common enemy – Hindus.

Hence it was no surprise when controversial Communist leader and Kerala state minister MM Mani said that the bureaucrat who led the demolition drive must be sent to a mental asylum and compared the demolition of the illegal cross to the Babri demolition.

Kerala Chief Minister Pinarayi Vijayan also stated that “the move created the feeling that the LDF government is waging a war against the cross.”  The CM had said he was not consulted on the Revenue officials’ move and that they did not need to demolish the cross.

However, senior CPI (M) leader V S Achuthanandan spoke in favour of the demolition of a massive cross stating that “encroachment in any form should be evicted even if it’s [the] cross.” Incidentally, in 2010, then Chief Minister V S Achutanandan had charged that radical Islamist organization Popular Front of India (PFI) had plans to Islamize Kerala in 20 years using “money and marriages”, thereby endorsing the Love Jihad menace which left-liberals have dismissed as a Hindu right-wing conspiracy.

Speaking at a public meeting, MM Mani insulted IAS Sriram Venkitaraman for the demolition drive and also made obscene sexual remarks against the ‘Pembilai Orumai’ collective of Dalit women tea plantation workers, who two years back had organised a successful labour strike without involving trade unions and political parties like CPM. CPM has let Mani off with a ‘public censure’. No prominent left liberal has spoken against Mani in their Lutyens’ Delhi echo chamber, whereas a statement against Mayawati by a lower level BJP functionary Dayashankar Singh dominated the airwaves for atleast a month.

Thamarassery Diocese Bishop Remigiose Inchananiyil also criticised the government for ‘denigrating the cross.’ “We are not against eviction of illegally occupied land. But insulting the cross in the name of the eviction drive cannot be tolerated,” he said.

The Syro Malabar Church Wednesday reacted cautiously. Church spokesman Fr Jimmy Poochakkatt opined that there was no issue in removing a cross erected on an encroached land but questioned the manner in which it was demolished in Munnar by the Idukki district administration as part of its anti- encroachment drive.

Geevarghese Mar Coorilos, Metropolitan of the Niranom diocese of the Jacobite Syrian Christian Church, backed the eviction. “The cross in Munnar was the most recent symbol of invasion,” he said after enumerating instances of colonial misuse of the cross and the Bible to grab land and to invade.

This muted response, many believe, has to do with the Catholic Church’s own position towards the ‘Spirit in Jesus’, a Thrissur-based sect reportedly founded and headed by a man named Tom Zachariah. In 2016, the Kerala Catholic Bishops’ Council had issued a directive banning the activities of ‘Spirit in Jesus’, stating that the charismatic group was “functioning against the Bible and the Christian faith”.

But illegal cross planting in hills of Kerala is not limited to any one Christian sect or group.

Sometimes these crosses even result in the death of wild animals around the region. But no animal rights activist or Delhi-based liberal has ever spoken against this – does Kerala too now fall under the ‘tyranny of distance’ category which was once offered as an excuse by Rajdeep Sardesai for lack of TV coverage of 2013 Assam riots when Congress was in power in the state?

Kerala government has now halted the Munnar eviction drive and called for an all-party meet to ‘garner support’.