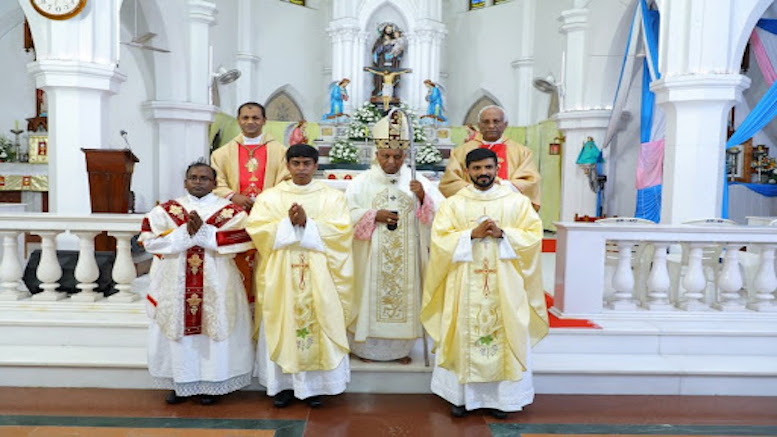 The Latin Catholic Church in Kerala stands accused of usurping Puramboke (unassessed Government land reserved for the public) land under the guise of disaster relief. The fishermen in Adimalathura near the Thiruvananthapuram shoreline belong mostly to the Latin Catholic Christian community. The Latin Archdiocese of Trivandrum led by Father Malbin Soosai sold Puramboke lands to 192 families. Parish Committee office member Fernandes has confirmed the same.

Locals say that the priest told them that land is plentifully available, and asked them to pay Rs. one lakh to the church for three cents of land (approx 1300 sq. ft.). Meanwhile the Parish Committee has applied to the Kerala Government for Pattayam, the first and original record about the ownership of a property. So in principle the church has sold land without proof of possession. The lack of knowledge and blind devotion of the poor fishing community towards the church was allegedly misused by church officials.

The church in its application to the Government says that land has been given to 192 families. It is alleged that a few crores must have changed hands and reached the Church by selling this encroached land.

Now, will the State Government wake up and do its duty or will it shy away from its responsibilities like it has done previously. The Pinarayi Vijayan Government has ill-treated Hindu devotees during the Sabarimala stand-off, but has chosen a more measured approach when it comes to the Christian community, especially the powerful Church.

It is also alleged that the church committee had earlier encroached a 1.5 acre land near the seashore, for commercial purposes. A convention centre was built defying all laws, including Coastal Regulation Zone (CRZ) laws. It still stands to this day. A High Court order to demolish the same is yet to be implemented. A Panchayat note written by officials who were asked to implement the order speaks volumes – “Abandoned eviction procedures due to continued threats.”

“The High Court says that this is Puramboke Land and this convention centre has been built on such lands” says Malbin Soosai when asked about the encroachment. He goes on to add that 2800 families had been using this land before the convention centre was built and issues a veiled threat, “around 18000 voters live here” meaning that he can control this many votes.

The District Collector and The Panchayat Secretary were gheraoed when they went to the area to implement the High Court order. This was done by the church using the fishermen who live there. Both the Collector and the Secretary are now facing contempt of Court charges.

Locals say the Church’s modus operandi is simple. First they plant a cross in one corner of a particular area with the intention of encroachment. They continue the process for another kilometre and gradually it becomes Church Land. This is how the land on which the Convention centre stands was acquired. Many believe the Pinarayi Vijayan Government does not have the willpower to stop such brazen encroachments.  In 2017,  the CPM Government lambasted a young IAS officer who dared to demolish a 25-feet tall cross illegally planted by a Christian group as an ‘RSS agent’.