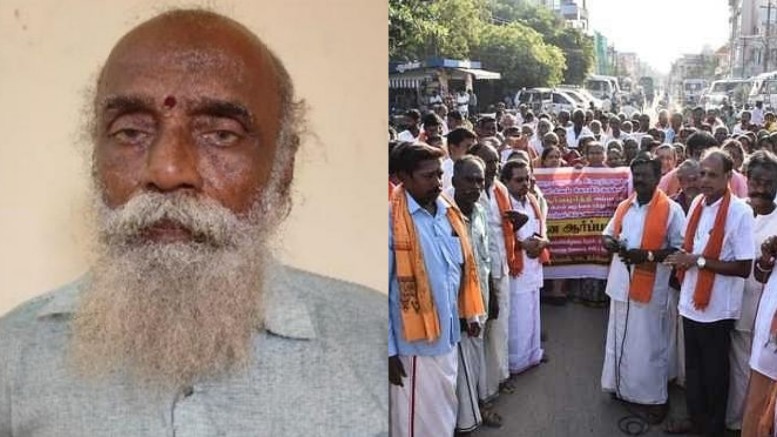 In Tamil Hindus allege that a temple priest has been falsely implicated in an idol theft case due to personal enmity of an ex-cop. The 75 year old pujari Suryamoorthi was arrested by the idol wing officials on the allegations that he had hidden 2 murtis and tried to sell them for Rs. 2 crores. Residents of the village protested against his arrest accusing the police of not investigating properly and locking up an innocent man.

The Trichy idol wing undertook an investigation to find the missing murtis of Nallakathayi Amman, Kanjamalai Eswarar, Anjaneyar and Vinayagar from Sri the Mannarsamy Nallakathayi Amman Temple in Mannarkoil village based on a complaint from one Veeramani. While searching for the murtis they investigated Suryamoorthi who has been serving the Kathayi Amman temple to which they belong. They arrested him on March 15 and released a statement saying that the pujari had hidden 2 murtis behind the Visalakshi Amman temple in Nemmeli.

They recovered two silver kavachams of Kathayi Amman and Shani Bhagwan, a silver pot and two silver lamps from his house. The statement also said that Suryamoorthi planned to sell the murtis for Rs.2 crores. News of the arrest was widely reported by Tamil and English media alike and the pujari’s name was smeared by anti-Hindus. However it has come to be known that he was protecting the murtis only because HRCE had abandoned it.

The two temples for Kashi Vishwanath-Visalakhshi and Uthrapatheeswarar in Nemmeli, a small village in Mayiladuthurai are under the control of TNHRCE department. Uthrapatheeswarar temple is said to be dilapidated and abandoned. The Kathayi Amman temple whose murtis went missing is located in Mannarkoil, another village near Nemmeli. It is also under the control of TNHRCE. Suryamoorthi and his dad Natesan have been serving both the temples for decades.

Both are respected figures among the residents of Nemmeli, Mannarkoil and other nearby villages. Villagers have condemned Suryamoorthi’s arrest and staged a protest against it in Sirkazhi. An elder of Nemmeli told Dinamalar that Suryamoorthi didn’t steal the murtis and police arrested him despite their objections. He said, “Suryamoorthi’s family has been serving as priests for 6 generations and there is no one in these five villages who doesn’t know him. The 7 murtis belonging to Kathayi Amman temple are kept in the idol protection center in Thirumayiladi Shiva temple”.

“They are brought here only during festivals and other special occasions. Once they9 are over they are taken back to the protection center. Kathayi Amman is the Kula Devi of one Veeramani, an ex-special Sub Inspector. Hence he has been showing interest in the affairs of the temple. A few days ago 3 murtis of Kathayi Amman temple were brought here for a festival. Veeramani enquired about the other 4 murtis and filed an RTI application to find their status”, he said.

HRCE replied that all the 7 murtis are in idol protection center. Yet, Veeramani informed the idol wing police that 4 murtis have gone missing. At his behest, idol wing police investigated Suryamoorthi. He told them that the utsava murtis, Pradosha Nayagan and his consort Pradosha nayagi, of the dilapidated Uthrapatheeswarar temple are kept in the Kashi Vishwanatha temple in Nemmeli as per public request. He also told them that permission was obtained from the Executive Officer of the Kashi Vishwanatha temple.

Even though he told them all the details and the circumstances about how the two murtis came to be kept in the temple, cops immediately seized the murtis and arrested him without checking facts. Villagers allege that there is a dispute between ex-cop Veeramani and certain individuals who use the property of Kathayi Amman temple. At 2 instances when Veeramani visited the temple Suryamoorthi was not in the village. As he couldn’t come Veeramani was irked that he wasn’t accorded the respect he demanded.

Villagers say that it is public knowledge and that Veeramani informed idol wing about the murtis to target Suryamoorthi. Another allegation is that the pujari could have been targeted because his son Ganesh, serving at Thirukadayur Amrithakadeswarar temple, helped late CM Jayalalitha and her friend Sasikala perform pujas in the past, which is why the DMK government has targeted him.

The silver articles recovered from the pujari’s house were reportedly donated by a devotee who had asked him to keep them at his house as the temple is not safe. His daughter-in-law told News18 that they were donated by a devotee who asked him to keep them safe at his house as a door of the temple is unhinged. “We did not hide or conceal them. We took them out in front of them and told them all this”. She said that the pujari was taken by the cops for investigation on March 11 and 12, and suddenly arrested without even informing the family members.

Murugan, Chairman of the village said that devotees themselves had asked Suryamoorthi to keep the murtis of Uthrapatheeswarar temple safe. He also said that the silver articles were handed over to the pujari and donors themselves asked him to keep them in a written document. Murugan says that there are records to show that everything was done legally and that the villagers are enraged by idol wing’s actions. Through out the interview he addresses the pujari only as “Ayya” respectfully.

Above all Balasubramanian, who donated the silver articles told News18 Tamil that they were donated on 19.10.2018 and he himself gave it in writing that the pujari should keep them at his house and take them to the temple for festivals and special occasions. News18 Tamil’s report further reveals that HRCE had catalogued the murtis belonging to the dilapidated Uthrapatheeswarar temple in 2017 and left the 2 murtis as they had no prior record of them.

Shocked by idol wing arresting a respected septuagenarian, residents of 5 villages in and around Nemmeli staged a protest in Sirkazhi. Hindu and Brahmin organisations also condemned his arrest and extended support to the protests. Recently 20 Dikshitars of Chidamabram temple were booked under SC/ST Atrocities Act for allegedly abusing an SC woman. It was perceived as a staged attempt to discredit the Dikshitars to take over the temple. SC had ruled that TNHRCE cannot take over the temple as it is a denominational temple and that only Dikshitars have the right to run it. HRCE minister of the DMK government has said on record that the government is devising a plan to take over the temple.