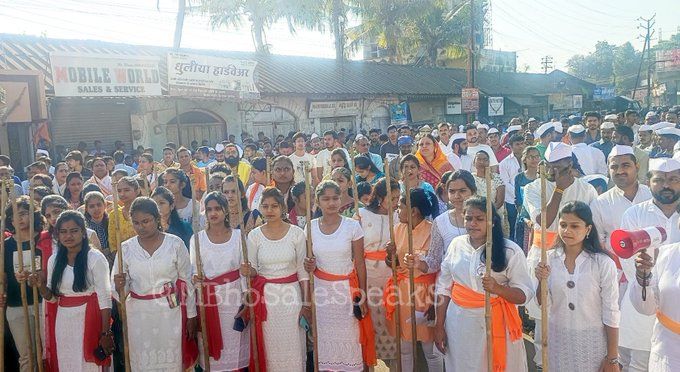 Hindu society has woken to the dangers of grooming jihad (love jihad) and recently, a rally was held in Maharashtra’s Dhule demanding the passing of a law to curb the menace. The participants demanded laws against forced conversions and love jihad as well as strengthening laws against cow slaughter.

Hindus in Dhule and Malegaon are faced with these problems with several cases of love jihad, forced conversions, and cow slaughter coming to the fore from these cities. Hence, a large number of Hindus, girls & women, in particular, joined the rally organized by Sambhaji Bhide Guruji. According to police, more than fifty thousand people joined the rally which included differently-abled, children, and women among others.

Last month in Dhule, Arshad Malik turned to Harshad Mali to trap a Hindu girl in love jihad. Similarly, Imran attempted to force a janjatiya girl in Malegaon town to convert to Islam and perform nikah. These cases led to anger among the people of both cities which saw large numbers of them join Guruji’s rally.

Before the rally commenced, the arati of Chhatrapati was performed at the Chhatrapati Shivaji Maharaj Smarak. The rally passed through several areas of the city with people joining it throughout. Participants raised slogans and carried posters against love jihad. They also highlighted that during Chhatrapati Shivaji Maharaj’s reign, those who disrespected women were punished by having their arms and legs cut off and demanded similar punishment for Aftab in the Shraddha Walkar case.

30000 people signed a memorandum addressed to the President, Prime Minister, Home Minister and Chief Minister of Maharashtra State. Bhide Guruji announced the rally after numerous instances of grooming jihad were reported from different parts of Maharashtra. Shri Shiv Pratishthan Hindustan announced rallies in several cities such as Nashik, Dhule, and others. These rallies have been receiving public support as well. People belonging to different organizations and various professions such as doctors and teachers among others participated in the Dhule rally.

The unique feature of the mass movement was that even though Sambhaji Bhide Guruji himself was not present at the rally, about fifty thousand people showed responsibility and participated enthusiastically in it. The composition of the movement was such that first the young women, then behind them the older women, differently-abled people, and youths and men were walking in a chain.