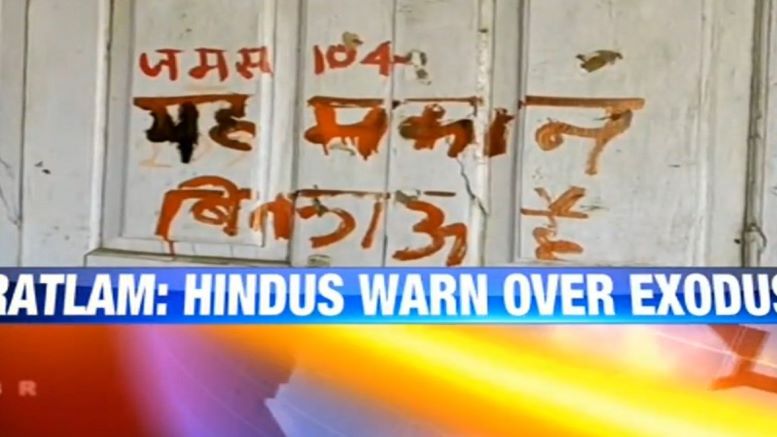 News of the exodus of Hindus from across different parts of the country has been emerging regularly with the latest one coming from Madhya Pradesh’s Ratlam. As per reports, more than 25 families from Surana village in Ratlam District had threatened to migrate from the village citing harassment by members of the Muslim community for the past two and half years. However, intervention by the administration has prevented the same.

The immediate trigger for the Hindus of the village to announce the exodus was the cross FIRs registered by the Biplank Police against Mukesh Jat and Mayur Khan after a scuffle between the two.

A Hindustan Times report on the issue says:

Upset with cross FIRs, the families who belong to Jat community wrote on the walls of their houses that these houses are on sale as they are posing a security threat and want to migrate from the village, locals said.

“They played objectionable music and took out rallies. Women didn’t feel safe due to them. They are harassing us mentally and when we go to the police station, police officers don’t take any action. On January 16, Mayur Khan with more than 100 people came to my house and abused me. He threatened me and asked me to leave the village,” said Mukesh Jat.

“When I filed FIR, the police registered a case against me too. We don’t feel safe here in the village,” he added.

Another villager, Omprakash Patel said, “A few members of Muslim community are harassing us. They mock us and scare us and shout abusive words to us. They throw garbage near our houses and spit in front of houses. They are terrorising our children.”

Subsequently, some of the representatives met District Collector Kumar Purshottam asking that they be allocated land in another village as they felt unsafe in the village and hence couldn’t continue living there.

MP Home Minister Narottam Mishra took cognizance of the matter and stepped in. “It is our duty to maintain peace and harmony in our state. The issue of Surana village is serious and nobody needs to feel scared. The administration will resolve this matter”, Mishra stated. Following the home minister’s order, a meeting was conducted with the villagers by Ratlam district collector Kumar Purshottam and superintendent of police Gaurav Tiwari.

SP Tiwari stated that would be setting up a police outpost with 10 police personnel stationed permanently to maintain law and order in the village while adding that they are taking action under the National Security Act against some anti-social elements who he alleged were creating trouble for the last few months.

The district collector remarked that they are attempting to resolve the issue of distrust among the villagers that has increased on account of some ‘small issues’. “The villagers said they feel unsafe due to regular fight and harassment so we have decided to form a committee of six members that include Sub-divisional magistrate and sub-divisional officer of police with two members of each community. They also said that people are encroaching upon their land so the encroachment will be cleared within a month,” he added.

Ratlam Collector tweeted confirming the clearing up of some of the encroachments while adding that the a permanent police outpost has been established in the village. The tweet also added that Surana village was now peaceful and calls of exodus by Hindus have now been withdrawn.

Recently, HinduPost had highlighted how a conspiracy was afoot to evict and depopulate Hindus in the Mumbai suburb of Malvani. A similar instance of Hindus being forced to move out and sell the temple land as well on account of demographic change had been reported from Bharuch.