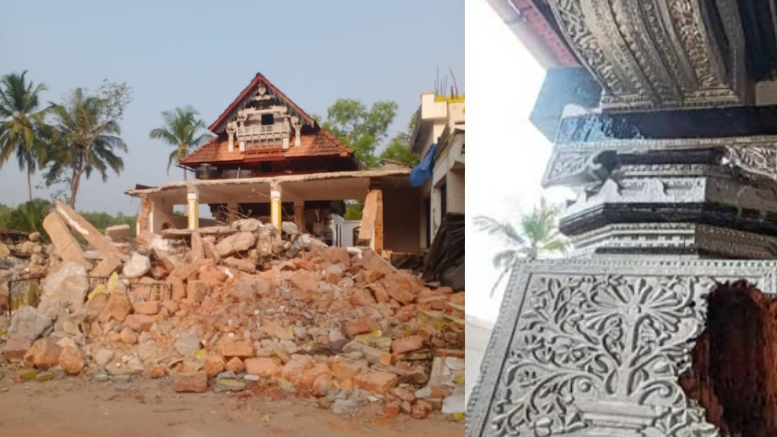 Excavations at Juma Masjid have revealed a Hindu temple buried beneath the old mosque located on the outskirts of Mangaluru. The structure came to light on Thursday when renovation work was undertaken by the mosque authorities at the Malali Juma Masjid.

VHP (Vishwa Hindu Parishad) leaders have appealed to the district administration to put a hold on the renovation work till verification of the documents is completed. “Meanwhile, Dakshina Kannada Commissionerate has ordered to maintain the status quo of the structure till further orders. The administration is looking into the land records and appealed to people to maintain peace”, noted ANI.

Dakshina Kannada Deputy Commissioner Rajendra KV informed the media that field officials and police personnel have informed him of the development. He further stated, “The District administration is looking into the old land records and entries regarding the ownership details. We will take reports both from the endowment department and the Waqf Board”.

“We will check the validity of the claims and take the appropriate decision very soon. Till then, I have instructed to maintain status quo and requested people not to jump into conclusions. I am requesting people to maintain law and order and peace,” added the official.

It is highly unlikely that those praying at the Masjid were unaware that the structure was constructed on temple land. It must be mentioned that 20% khums (tax) was applicable on ghanayam (property, movable and immovable) booty seized in any raid or as a result of actual warfare and this could have been very well part of the same.

Interestingly, this discovery comes close on the heels of Bhagwans Hanuman and Shanidev murtis being recovered during excavation in a Dargah in UP’s (Uttar Pradesh) Etah. The murtis were found at the Bade Miyan Dargah premises located in the Jalesar area and locals have alleged that the site housed a Shanidev Mandir earlier which was subsequently replaced by the Dargah. The locals have also leveled charges of the Dargah having been built on encroached temple land.

Constructing Masjids/mosques on temple lands/ atop temples has been a practice of Islamic invaders. The Babri Masjid is an apt example of such an encroachment. Mention must also be made of the Masjid that has enroached upon the Shri Krishna Janmabhoomi temple at Mathura. Excavations across the country are confirming what Shri Sitaram Goel had said in his book Hindu Temples: What happened to them?

In wake of these discoveries isn’t it high time the ASI (Archaeological Survey of India) steps up to the plate and does a thorough excavation? or are we expecting too much from them? As of now, though, all eyes will be on Dakshin Kannada District Administration.