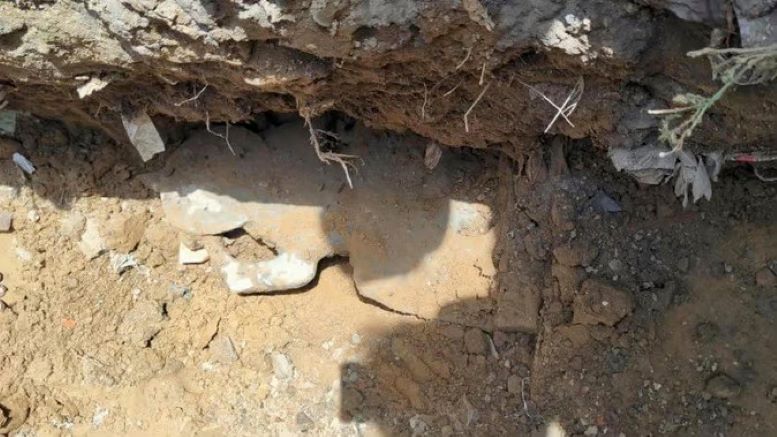 Murtis of Hindu deities Hanuman and Shanidev were recovered during excavation in a Dargah in UP’s (Uttar Pradesh) Etah. The murtis were found at the Bade Miyan Dargah premises located in the Jalesar area and locals have alleged that the site housed a Shanidev Mandir earlier which was subsequently replaced by the Dargah. The locals have also leveled charges of the Dargah having been built on encroached temple land.

The murtis were discovered when construction activities were undertaken on the premises to erect a police chowki. The vigrahas were subsequently purified and oil Abhishek was performed for Shri Shanidev’s murti. At present, both the vigrahas have been kept at the rest house located within the compound.

The excavation activity was undertaken 10 meters away from the Bade Miyan Mausoleum in the Dargah on Friday (April 15). SDM Alankar Agnihotri and CO Irfan Nasir Khan were tasked with the supervision of the excavation. During the course of the construction, around 11 in the morning one of the laborers came across the Shri Shanidev murti buried face down. The news of the discovery spread like wildfire in the Jalesar area. About an hour after this discovery, the workers came across a small Bhagwan Hanuman murti a short distance away.

Pandits were called in for the purification puja and MLA Sanjiv Diwakar offered oil to the vigraha. SDM (Administration) Alok Kumar and Additional Superintendent of Police Dhananjay Singh Kushwaha reached the spot as well and took cognizance of the entire matter. On this occasion, BJP MLA Diwakar declared that there was no Dargah in this place and it has been the site of a temple. He also stated that the murtis would be consecrated within the same premises.

The ASI (Archaeological Survey of India) team is expected to arrive at the site to collect samples in order to establish the date of the murtis and find out their antiquity. It must be mentioned that the BJP MLA as well as locals have been claiming that the site was home to a temple of Bhagwan Shanidev for a long time now. They also insisted that the Shri Shanidev murti had been kept buried. The discovery has only added to the credence of their claims and fuelled a debate.

Interestingly, this discovery is the latest addition to the list of several such murtis that have been discovered in recent times from different states across Bharat.