Krishna is not a prop for your fancy dress competition; stop appropriation of Hindu Dharma 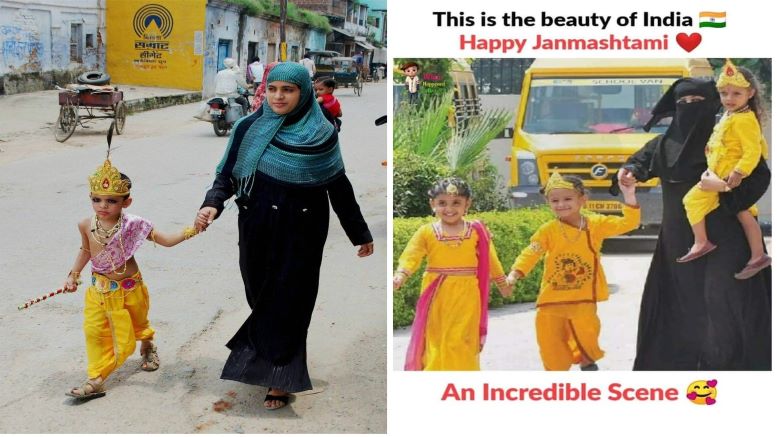 On Janmashtami, Congress leader Shashi Tharoor tweeted an image that according to him was a representation of Janmashtami 2020. A picture of a Burkha-clad woman holding the hand of her son, understandably a Muslim child, dressed as little Krishna. The mother and the son duo, through a busy street of some Bharatiya city, were perhaps headed towards the child’s school.

A similar picture was shared by P. Naveen, the pro-Congress Bangalore youth whose comment to an anti-Hindu post by a Muslim man led to the riots in the city. Extremely secular in his approach, P.Naveen’s Facebook post features a woman in a burkha with all her three children dressed as Krishna and gopis.

“This is the beauty of India” was the intended message through both these posts. The supposed “beauty”, as shared by Shashi Tharoor and P.Naveen, was not limited to these two odd posts alone. In the past 10 years, ever since the common man gained uninterrupted and easy access to the internet and has become social media savvy, this very picture has been circulated a million times.

Janmashtami, seemingly, is not complete till half a dozen secular netizens don’t post this very picture with the cringe-worthy caption: This is the beauty of India. Every year they put up the same picture, trying to convince us that it’s the latest image and that they have themselves clicked it just now while on their way to the grocery store.

It’s about time we made an impartial and honest analysis of this picture. My frank opinion is that this is the most overrated and overused picture in the history of Google Images. Also, it is objectionable at many levels.

It is natural and a regular practice among the Hindus to deck-up their babies, toddlers, and young children as Kanha on the auspicious day of Krishna Janmashtami. This is not some random secular behavior. Parents or family members who transform their little ones as Gopala on Krishna Janmashtami are devotees of Bhagwan Krishna. We pray to Him, seek His blessings and mercy, have faith in His judgment. We look at Bhagwan Krishna as the ultimate savior, the protector of the universe. We not only dress up a child as Kahna but also strive to inculcate the values of Bhagwan Krishna in him.

The practice of dressing up children as Kanha on Janmashtami is not the Bharatiya equivalent of the western Halloween, something that the modern secular families in Bharat have adopted as their own in recent times. It is not like the child can choose to be any fictitious character that fascinates him for one day. For a devout Hindu, Krishna is not a character from a fairy tale, He is the ultimate Truth.

The Hindu culture, faith, and tradition is not a fancy dress competition that one would “dress up” as Kahna and show up at an event to compete with other Kanhas. Only in Bharat, people enjoy the freedom to appropriate the Hindu culture and get away with it in the name of secularism. Back in 2008, the American-German model Heidi Klum came under fire for showing up at a Halloween party as the Hindu Goddess Kali. Prominent Hindu speakers demanded that the model tendered a public apology for her choice of dressing and her gory take on the Hindu deity.

Here in Bharat, we have turned our Bhagwans into mere props. We allow those bereft of any devotion or belief in Bhagwan Krishna to use him as a means to grab eyeballs. It is this attitude that emboldens Bollywood actors like Aamir Khan to showcase Bhagwan Shiva as some weakling and chase Him around as a cat pounces on a rat. On the other hand, A R Rahman gets a Fatwa issued for composing music for a movie on the Islamic Prophet.

It is high time Hindus stand up to seculars, certainly have no faith in Hindu Dharma, who cheer such cheap gimmicks as a burqa-clad woman taking her kid to school dressed up as Bhagwan Krishna. Clearly, they have no sense of self-respect, self-worth, and absolutely no knowledge about Hindu Dharma. They cannot differentiate between what is appropriate and what is not. Appropriation of the Hindu dharma must be stopped immediately and never be encouraged by sharing these pictures accompanied by tall talks of secularism. Religion and secularism don’t go hand-in-hand.

Dahi-handi celebrated with gusto in Maharashtra