Karnataka : Vishwa Hindu Parishad & Bajrang Dal activists have submitted a memorandum to state government via Udupi DC pressing for a probe in the involvement of Kalaburagi DC- Commercial Tax, Irshad Ullah Khan & his wife in cases of Love Jihad / grooming.

Looks like the Muslim couple is involved in more than one case of brain washing / luring / blackmailing non-Muslim girls to convert to Islam and move to Saudi Arabia or Syria (Islamic State). However, charges are not yet proved and NIA has questioned both of them and seized various laptops, mobile phones and SIM cards from the duo. Reportedly, official’s wife is an engineer and social worker.

NIA sleuths questioned the wife of Khan who allegedly gave classes in Islamic studies to the complainant in 2016. The raid was conducted on June 6 and 7. The woman, who was studying animation course in Bengaluru in 2013, was in love with Muhammed Riyas. She was allegedly forced to convert to Islam and taken to Jeddah in Saudi Arabia, from where she escaped while attempts were being made to take her to Syria. She had filed a complaint with Kerala police in December 2017. In January 2018, NIA took up the case and arrested Riyas from Chennai International Airport on his arrival from Saudi Arabia. NIA has named nine persons as accused in the case; four are from Bengaluru.

However, there seems to be more than one case where this government official and his wife have been questioned by NIA , going by this news report  , Irshad Khan’s wife has also been asked about her involvement in another case of 25 year old Hindu girl from Kochi who was purposely seduced and converted to Islam. Then she was taken to Syria for ISIS. 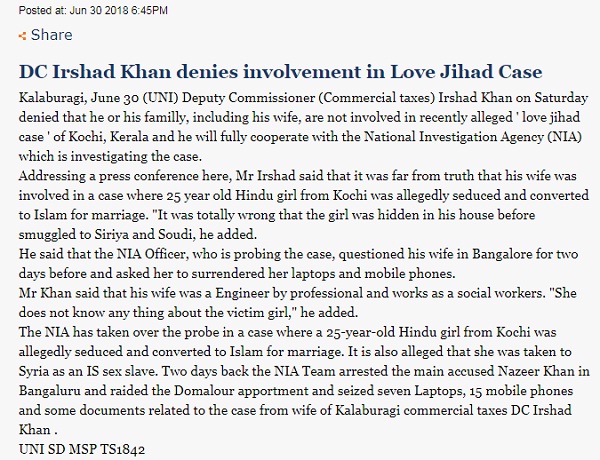