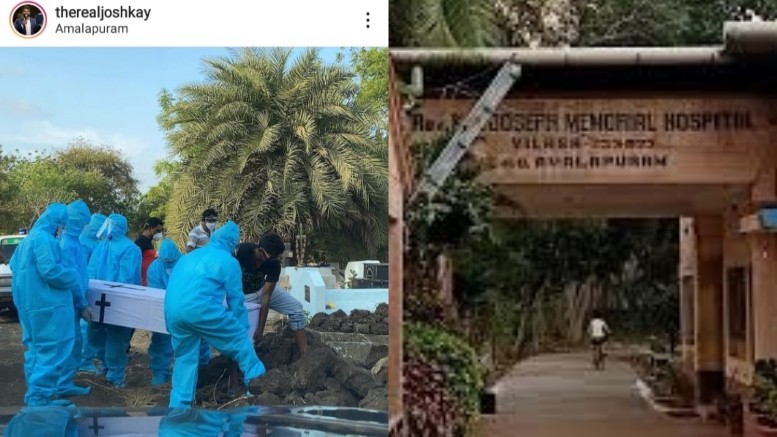 An Andhra based missionary organisation has been collecting funds from abroad by showing Bharat in a poor light. It had painted an image that no medical facilities were available in the country during the second wave and begged for funds to start an Intensive Care Unit. In this way the organisation has built a whole empire in Andhra and expanded to other states and countries as well.

Joshua Komanapalli, a Pentecostal pastor from Andhra Pradesh had told an US pastor about the “grave situation” in Bharat during the second wave of Covid-19. Joshua had described the situation in Amalapuram, Andhra Pradesh as “it felt like a horror movie“. Hearing the “first hand account” of the situation, the US pastor, George Davis, felt that he had to do something and collected money from his congregation and sent over $1,00,000 (Rs.75.5 lakhs).

Using the money Joshua is claimed to have converted an old orphanage into “the first full-fledged Intensive Care Unit in Amalapuram”. First Coast News, an US media reported that “it will be the only hospital in town“. George Davis’ Impact church had contributed to “feed 50 families for a month”. The article talked about the grave situation in Bharat and how people from the other end of the world helped rectify it. However the truth is different. Neither is the ICU built with the help of Impact Church, the first in Amalapuram, nor is Joushua Komanapalli, some poor pastor lamenting about being unable to help fellow citizens.

He is the heir of an Empire built by missionaries Ernest Komanapalli and his wife Rachel in the 1970s. The duo had founded Manna Ministries in 1996 in Amalapuram, AP. Ernest had attended the World Pentecostal Conference in 1961 where he established connections with foreign ministries. He went to the US and made even more connections. Later he married Rachel and the two of them worked as teachers there. Manna Ministries is said to have been founded using their first salary.

In 1971, Manna Full Gospel Ministries was founded to expand their missionary activities elsewhere. Their website claims that by 1975, 350 churches were planted by the ministry. Now they operate churches in 23 states and 3 Union Territories of Bharat and claim to have 1600 congregations.

Manna Ministries thought ahead of time and found an orphanage, Miriam Children’s Home in 1968. Now they run 40 orphanages where more than 3500 children are residing. As per the information available on their website nearly 17,000 children have grown up and gone out from their orphanages. They openly accept that children who grew up in these orphanages were called into ministries and pastoral service.

Unlike other “orphanages” Manna Ministries doesn’t hide the background of the children they take in. In fact they have 4 criterias based on which children are categorised. Orphans, semi-orphans, children who are at risk of being married off or forced into labor by their parents and children who have both parents who cannot provide for them are admitted to the children homes run by the ministry.

They couldn’t send the children to government schools as they didn’t teach English and were substandard. So they found Miriam Primary school in 1972 which was later upgraded as a higher secondary school. Now they run 10 schools, 2 industrial training institutes, Paramjyothi Junior College, Miriam College, Miriam College of Education, etc under Paramjyothi Educational Trust. Apart from these they also run Lion Crest Academy, an elite international school and online learning platform.

Then Ernest and Rachel felt that providing medical services would strengthen the ministry further as a result of which Rev.KS Joseph Memorial Hospital was founded. Hospitals and clinics were opened which focused on eye camps and medical camps to attract people. Manna Ministries website claims that one day some lepers came to their church and the New Life Center was founded to accommodate them. Now they claim to support 100 families out of which 50 families reside at this center as a community.

Apart from providing regular education, the ministry had to establish an institute to impart theological studies and thus Manna Bible Institute was founded in Amalapuram. Now, there is one each in Bhimavaram, Eluru and Hyderabad as well. In 1978, with the aim to “train men and women to reach out to all states” Rock Church Ministries and Educational Foundation was formed.

The effort paid, for churches were planted in Madhya Pradesh, Manipur, Karnataka, Maharashtra and Andaman Islands in 1980s and in Tamil Nadu, Assam and Mizoram in the 1990s. It further grew and expanded to Bhutan, Cambodia, Vietnam and China to where pastors were sent and supported by Manna Ministries. They even sent missionaries to Myanmar in 2003. The Rock Church Ministries established a church, a Bible College and a children’s home for the deaf and dumb in Hyderabad. It also operates special gospel programs for the disabled.

Then the age of mass media dawned and Manna Ministries waded into the field by founding Dayspring Enterprises of India in 1979 which made documentaries and movies to spread the gospel. Later Arunodaya Ministries came to capture all forms of public relationship through TV programs, magazines, music, etc. But it still wasn’t enough and Manna International Ministries was founded in the US while they worked with Zoe Global Ministries in South Africa with whose help Manna Bible College was established there.

This empire, almost like a parallel government, is now run by the Komanapalli family after Ernest died in May. Joshua Komanapalli, who helped us unearth this empire, is the nephew of Ernest. Carl Komanapalli, father of Joshua and brother of Ernest, is the secretary treasurer of Manna Group of Ministries. Joshua founded Beach City Church in Visakhapatnam and is the Principal of Paramjyoti & Miriam School and Director of Lioncrest Learning Academy. Carl’s other son Bishop Sudarshan Jyoti Komanapalli is the Chairman of the Manna Group of Ministries and the President of Manna International.

In a fundraising video for the “only hospital in town” Joushua had claimed that the tablet to treat Covid-19 costs Rs.50,000. A doctor from Rev.KS Joseph Memorial Hospital claimed that 10,000 people were detected Covid-19 positive everyday and 5,000 of them needed hospitalization in Amalapuram. He also said that only 2500 beds were available in the 2 Covid designated centers and so the remaining 2500 were struggling to find beds. Josh Komanapalli proposed to convert the children’s home built 50 years ago to be renovated and used as a hospital. He implored donors to be generous as “people are gasping for air and oxygen”.

A simple google search reveals that there are many hospitals in Amalapuram and some of them even multi speciality ones. But the international media were feeding firangs with “information” like “India’s actual death count could be triple”, “mismatch in death counts”, etc. So it wasn’t surprising to them when Joushua described the situation as a “horror movie”. But an organisation which built an empire would need funds to set up an intensive care unit was surprising to us.

When we tried to find out whether they were really starved of funds, we found that the various arms of Manna Ministries runs 9 FCRA NGOs. To give an idea of how much these organisations receive from abroad, their annual returns for the financial year 2019-20 were checked.

Lion Crest Learning Academy mentioned earlier is an elite institute where fee is collected in lakhs. Despite running such “profit making” organisations, these people had to show Bharat as a hell hole to beg for funds and fill their pockets. What’s funny, but not in a good way, is that in August pastor George Davis’ Impact Church lost 7 lives to Covid-19 in 10 days! Will Manna Ministries now collect funds from Bharatiya to build “the only hospital” in Jacksonville?