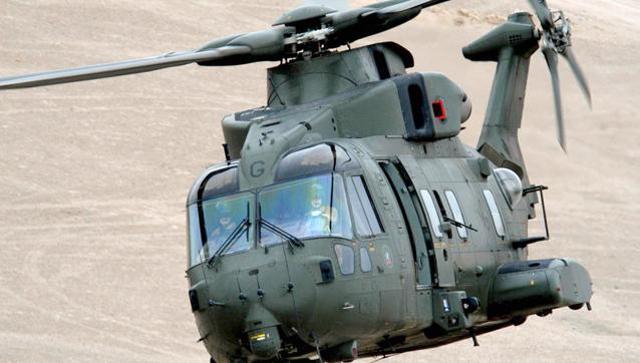 The AgustaWestland scam has rattled many powerful elements in our national polity as their links to the corruption scandal are coming out every passing day. The list includes top Congress politicians, senior media professionals, bureaucrats, defence officers etc. So it is not surprising that a concerted campaign has been started to paint the issue as ‘usual political mud-slinging’, and false statements like ‘UPA Government blacklisted AugustaWestland’, ‘why was current Government sleeping for 2 years’ etc are being bandied about.
We have already reported on how the scam unfolded and the CBI and ED actions since May 2014 to corner the key accused in the scam. Now, the Government has also issued a detailed clarification through PIB (Press Information Bureau) to counter the sophisticated misinformation campaign which has been launched to save the accused in the AgustaWestland probe –
Here is the link to the Government clarification – http://pib.nic.in/newsite/mbErel.aspx?relid=142592
It is reproduced in entirety below, with key portions highlighted –

In the matter pertaining to acquisition of Agusta Westland helicopters, the undisputed central issue that stands out is corruption, especially bribery. Any other line of assumption, approach and effort, as is being attempted in some quarters, is misleading, tries to hide the wrong-doers and is driven by instincts of self preservation.

Ever since the new government was given the responsibility to serve the people, it has acted with speed, drive and purpose to empower the country’s masses. It continues to relentlessly pursue fearless and transparent governance. One of the core goals of our governance has been to unearth and uproot corruption, and punish the corrupt.

It is indeed tragic that a small section of the Indian polity has attempted, unsuccessfully, to divert and diffuse the public discourse on this matter. They question the speed of the government processes, especially the investigation. But, they do not ask how the corrupt influenced the process of acquisition in the first place and bled the nation. They do not admit corruption; they instead boldly proclaim, “catch us if you can”.

The present government has taken effective action to bring out the truth and will leave no stone unturned in pursuing all means to bring to justice the corrupt and the wrong-doers in this case.

The investigative agencies remain determined to bring to justice the key perpetrators of this misdeed, both inside and outside the country.

The government has acted proactively and with alacrity against Agusta Westland International and Finmeccanica. It is the present government which through its order dated 3 July 2014, put on hold all procurement/acquisition cases in the pipeline of six companies figuring in the FIR registered by the CBI, namely: M/S Agusta Westland International Ltd., UK, M/S Finmeccanica, Italy, and its group companies, including subsidiaries and affiliates, M/S IDS, Tunisia, M/S Infotech Design System (IDS), Mauritius, M/S IDS Infotech Ltd, Mohali and M/S Aeromatrix Info Solution Pvt Ltd, Chandigarh.

In doing so, we did not let the preparedness of our defence forces suffer. At the same time, we also ensured that no new capital procurement was made thereafter from these companies in the tenure of the present Government.

The factually misinformed have also made a mention regarding clearance of a joint venture involving Agusta Westland by the Foreign Investment Promotion Board. This proposal was approved on 2nd September 2011 based on an application by Indian Rotorcraft Ltd a joint venture of Tata Sons with Agusta Westland NV, Netherlands. This was later changed to Agusta Westland S.p.A Italy due to reorganization within the group. On 7th February 2012, an industrial licence for the manufacture of helicopters was granted by the Department of Industrial Policy and Promotion to Indian Rotorcraft Ltd. However, the validity of licence has since expired.

In their drive to divert the public attention from their own corruption, some have said that the Modi government permitted Agusta Westland to bid for 100 Naval Utility Helicopters in April, 2015. The fact is that a techno-commercial Request for Proposal (RFP) for Naval Utility Helicopters was issued to eight vendors on 4 August 2012. In response to the RFP, M/S Eurocopters, France and M/S Agusta Westland S.p.A Italy submitted their techno-commercial proposals on 4 March 2013. RFP of the procurement case was retracted by the Government on 13 October 2014.

The Indian Navy has hosted on the website a Request for Information for more than 100 Naval Utility Helicopter in October 2014. No Request for Proposal has been issued, therefore the question of permitting Agusta Westland to bid for the Naval Utility Helicopter in April 2015 does not arise. The government is exploring whether their manufacturing can be pursued under “Make in India”.

On the core issue of corruption, the timeline of actions taken by the CBI and Enforcement Directorate clearly shows due rigour and diligence with which these agencies have pursued all aspects of their investigations, including the arrest and extradition of three foreign nationals namely Mr. Carlo Gerosa, Mr. Guido Haschke Ralph and Christian Michel James.

CBI has so far investigated over 100 witnesses. In September and November 2014, couple of accused have been arrested and their property attached. A criminal complaint was also filed. Letter of Requests were sent out by ED and CBI to Mauritius (July 2013), Tunisia and Italy (December 2013), British Virgin Islands, Singapore and U.K. (September 2014), UAE and Switzerland (December 2014). The agencies are continuing to pursue responses to the LRs from the countries concerned.

Further, an open ended non bailable arrest warrant was issued by CBI against Mr. Christian James Michel on 24 September 2015. Red Corner notices were issued in December 2015 and January 2016 through Interpol under Prevention of Money Laundering Act and Prevention of Corruption Act on charges of conspiracy and abuse of official position in giving favours to M/s AWIL.

Extradition request has also been made for Christian Michel James. A request for provision arrest for the purpose of extradition was made to the U.K. authorities on 4 January 2016 by CBI. Enforcement Directorate, another autonomous agency to handle private money laundering and Foreign Exchange irregularities, has also separately sent a Red Corner seeking arrest and a request for his extradition from the U.K. on 29 February 2016.

By asking why did Prime Minister and BJP government not take any action on the alleged offer dated 08.11.2015 made by James Christian Michael to be questioned by CBI and ED including on Indian soil, some have even tried to side with a wanted criminal.

It is well known that any understanding/agreement with an accused outside the frame of law is a criminal act in itself. James Christian Michael is a criminal wanted by the Indian law enforcement agencies. We are pursuing all legal means to arrest him and have him extradited to India. Mr. Michel should submit himself to the Indian legal system rather than make elliptical references to offers that are suspect in intent and reality. We are determined that the law must take its course against Mr. Michel and his associates in this matter.

Those who cannot see Prime Minister succeed even hint at him cutting a deal. Nothing could be farther from the truth. Prime Minister Modi did not cut any deal of any sort. His only goal and priority is the development of comprehensive national power, and empowerment of our masses.

A few have even sought to link one of the accused with Shri Ajit Doval, present NSA, as also Shri Nripendra Mishra, Principal Secretary to the Prime Minister. This is a totally baseless assertion, devoid of reason and logic, and indicative of malicious intent. In reality, there is no such connection.

Individuals in some quarters have even gone to the extent of ascribing intent to the technicalities of the CAG audit of the state governments of Rajasthan and Chattisgarh. They ask as to why did Modi government not take any action against Chhattisgarh Chief Minister, Dr. Raman Singh despite an indictment of Chhattisgarh government by CAG in purchase of Agusta Westland Helicopter, which led to loss to public exchequer (according to CAG) of Rs.65 lakh?

Similarly, as per the State Government of Rajasthan, the alleged loss to public exchequer according to CAG was not on account of any irregularity in the procurement process, but due to the expenditure incurred on account of lack of planning and basic infrastructure prior to procurement, such as pilot training and maintenance. In this case too, the acquisition was done in 2005.

The Government appeals to the countrymen to recognize the nature and depth of corruption in Agusta Westland case. The investigative agencies will stay their course in unveiling the corrupt and holding them accountable to our public.