Firecrackers at Mannat for Aryan Khan’s bail, courts and police look the other way 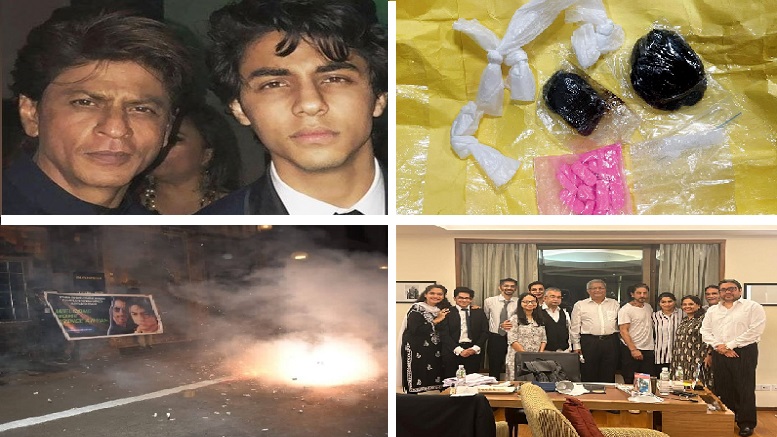 Mumbai High Court granted bail to Aryan Khan, son of Bollywood superstar Shah Rukh Khan. Aryan and his friends were caught redhanded by the Narcotics Control Bureau (NCB) with hardcore drugs while sailing on the high seas in a cruise ship headed for Goa from Mumbai. There are 17 accused in the case.

NCB had charged him under sections related to consumption, possession, and sale of illegal drugs. Bail was granted within a month even though the (NCB) categorically stated in Court that Aryan has international links to drug runners and has worked to procure drugs in bulk.

Shah Rukh’s advocates approached the Mumbai High Court after a Narcotic Drugs and Psychotropic Substances cases special court rejected his bail twice this month. Just last week, the special court had rejected the bail pleas of Aryan and a couple of others. The same courts flipped and said that mere presence on the cruise ship doesn’t prove conspiracy theory!

As news spread, celebrations began outside Shah Rukh’s residence ‘Mannat’. Fans rejoiced that ‘Prince Aryan Khan’ has been granted bail. They sported banners that said ‘Welcome Home Prince Aryan’. They rejoiced by bursting lavish amounts of firecrackers and followed none of the coronavirus prevention protocols.

‘Fans’ conveniently forgot that Aryan is not a gold medal winner for Bharat but just another rich drug-addicted teenager. He is in fact a bad influence on all youngsters, rich or not.

The hypocrisy of both the courts and the administration came into full public view. Hindus are being discouraged from using fireworks for the upcoming Diwali festivities and their use is banned by the courts. Similar scenes of cracker bursting celebrations were seen in some parts of Bharat when Bharat lost a match to Pakistan recently at the World T20 cup.

The common man questioned the manner in which the ban on firecrackers is being harshly imposed, especially in non-BJP ruled states for Diwali. Some even said that it would have been better if Aryan was released during Diwali so that Hindus could use the same excuse to burst crackers. Incidentally, firecrackers are part and parcel of victory celebrations of most politicians all over Bharat.

The manner in which this VIP drug case has been heard repeatedly and at length by the courts points to the duplicity of the authorities. Usually, drug suspects are jailed for a minimum of 6 months before bail is even considered.

Those of us who thought for the past few weeks that money power is after all not all that powerful have now been proved wrong. The final outcome shows that wealth and a victim card can get you anywhere in Bharat.

Former Advocate General Mukul Rohatgi had appeared for Aryan and stated that the High court order will be awarded on Friday. Shah Rukh was later seen rejoicing with a whole bunch of lawyers involved in his son’s drug case.

Pollution from firecrackers does not even count in the top 100 pollutants in Bharat. Farmers burning stubble in Punjab spread far and wide and cause far more smog that lasts for weeks if not months. For anti-Hindu forces, however, fireworks pollute & poison only during Diwali.