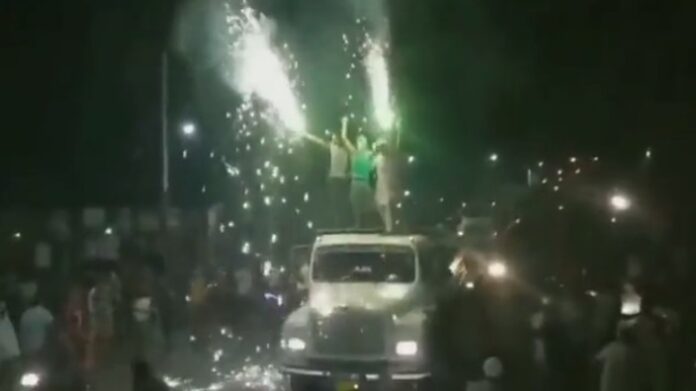 To no one’s surprise, soon after the Bharatiya team lost the T20 match to the Islamist nation of Pakistan, celebratory fireworks started from regions and localities of Bharat dominated by Muslims. Such celebrations were noticed in many major cities of the country and of course in Muslim majority Kashmir, from where almost all non-Muslims have been ethnically cleansed.

While residents of Delhi and left-liberal politicians, journalists and celebrities often complain of the ‘levels of air population’ in the capital city during Diwali, it was astonishing to see their silence as the Delhi sky above the Seemapuri area, known for its thriving Muslim population, lit up with firecracker sparks and smoke.

While the captain of the Bharatiya cricket team and all our institutions from government to SC/NGT routinely discourage Hindus from bursting fireworks on Diwali, the average Hindu, denied his/her right to celebrate, looked at Muslim localities reveling in Pakistan’s glory and termed it ‘New India’s New Festivals’.

Students of SKIMS Medical College, Srinagar were also seen celebrating Bharat’s defeat in the T20 match. These are doctors-to-be who are receiving education in government institutions that are run with tax payers’ money. It is an established fact that the lion’s share of this tax is paid by Hindus, and it is a disaster that it is being spent to educate those who are cheering for this country’s defeat. Can any Bharatiya trust these traitors with their lives in a couple of years after they become doctors?

Not only the SKIMS medical college, Srinagar, but visuals of celebrations have surfaced from other parts of Kashmir as well. Huge crowds gathered on the streets and fireworks were lit to celebrate Pakistan’s win. Pakistan’s interior minister dubbed this cricket match as a ‘victory for Islam’ and these scenes from Bharat prove that many of our ‘citizens’ share such beliefs.

Videos of Pakistan’s victory being celebrated with fireworks have surfaced from Bihar’s Gopalganj as well.

Firecracker celebrations were reported from Gujarat too.

In another incident, police has confirmed that the Kashmiri students at the Bhai Gurdas Institute of Engineering and Technology in Sangrur, Punjab were cheering for Pakistan during the Ind-Pak match. This led to a scuffle between them and students from UP and Bihar.

A senior police official from Sangrur said, “There are about 90 Kashmiri students and around 30 students from UP and Bihar in the college. Kashmiri students stay in 2 wings of the hostel. While the match was on, the students cheered when Pakistan was hitting runs. They also raised azadi slogans.”

Surprisingly, or maybe not seeing the return of the Khalistan sentiment in the state, celebrations were reported from Punjab university, Patiala as well.

The celebration was high in Uttar Pradesh’s Saharanpur as well. Netizens have shared images of crackers going off from areas with a Muslim majority.

Some Muslim journalists and politicians from the Congress camp were in high spirits, and mocking ‘bhakts’ and ‘sanghis’ (their dog-whistle slurs to target all Hindus) over the loss to Pakistan.

One hilarious defense by Islamist-apologists to cover up for these crackers being burst right after the match ended was that ‘they were being burst to celebrate the Hindu festival of Karva Chauth’.

Be it, students, regular residents, politicians or journalists, the joy of Indian Islamists from all walks of life at the victory of an Islamo-fascist, terror sponsoring nation whose primary foreign policy goal is to bleed Bharat with a 1000 cuts and defeat it for the glory of Islam, is obvious and difficult to rubbish. These closet Islamists and Pakophiles live on Bharatiya soil and benefit from the development works and minority-only doles given by Bharat’s government, but support Pakistan with their heart and soul, all because of the religious identity of Islam.

Such attitudes have been apparent in the past too when Pakistan managed to defeat Bharat in cricket. It was apparent during the Pulwama attack, the abrogation of Article 370 and 35 A, and whenever an opportunity presents itself to show solidarity with the global ummah.

The celebrations in Bharat for Pakistan’s victory spoke for themselves and the fireworks went off till late night in many parts. Bollywood actress Anushka Sharma’s husband, Virat Kohli, who routinely educates Hindus against bursting fireworks on Diwali, decided not to give any lecture to Pakistani supporters in his city bursting crackers. However, former cricket Virender Sehwag and his opening partner Gautam Gambhir took to Twitter to call out the hypocrisy of the anti-Diwali coterie and their indifference to the pro-Pakistan fireworks.

We can ignore such signs only at our own peril. Our secular state has continued to empower and legitimize exactly the sort of dangerous, supremacist and exclusivist Islamic organizations that create such separatist mindsets. And we continue to harbor the same delusions that keep the ‘majority’ confused.