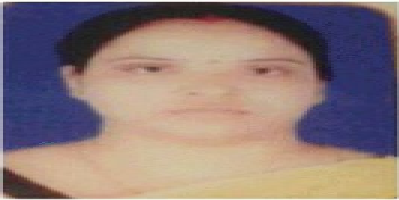 Ruma Mondal, mother of 3 daughters and resident of Charavidya, South 24 Parganas district, who was missing from 3 May was found dead 2 days later. Her family suspects she was murdered by Akbar Ali Gazi, the husband of a local panchayat official & TMC member, as she was resisting his son’s advances towards her minor daughter.

The family alleges that WB police refused to register their missing person complaint on 3 May and the FIR was only filed in New Town police station after Ruma’s body was found next to a drain on 5 May. It is suspected that she was raped before being murdered.

Ruma who worked for a local Government welfare organization, had 3 daughters. Akbar Ghazi’s son Bablu Ghazi (18+) was stalking her youngest daughter (15), and Ruma opposed this for which she was threatened on many occasions over phone and in person.

After Ruma went missing on 3 May, her family went to file a missing person complaint with police and also provided the name of Akbar Gazi as prime suspect. But police refused to register a complaint. On 5 May, Ruma’s body was found adjacent to a drain and police finally filed an FIR, but the accused Akbar Gazi had fled by then. Ruma’s family believe she would have been alive today if police had launched a search for her on 3 May itself. They allege a nexus between the local police and accused Akbar Gazi who is husband of a TMC panchayat official.

When nation was celebrating capital punishment for rapists of Jyoti, a dalit lady was raped & murdered near Kolkata. Accused-Akbar Ali & son pic.twitter.com/VA7El5Ylpz

This news has barely been reported in WB regional media, leave alone make it to national news. One of the leading Bengali dailies, Anandbazar Patrika has reported a watered down version without naming the accused.

We spoke with Prasun Maitra, activist with Hindu Samhati, an organization fighting for the human rights of the persecuted Hindu population of West Bengal. He questioned the role of the Mamta regime and West Bengal police in this whole matter, and said that there is a clear pattern which proves how sections of WB police connive with criminals having links to the ruling TMC or the influential Islamist lobby. He gave two examples to back up his claims.

Ambia Sohrab, son of an influential TMC leader and ex-RJD MLA, who is accused in a hit & run case which claimed the life of Corporal Abhimanyu Gaud while he was rehearsing for the Republic Day Parade, is still absconding.

In the case of rape & murder of deaf & dumb Manasi Patra, again in South 24 Parganas district, it is alleged that police in nexus with the accused deliberately failed to file chargesheet in time in order to help prime accused Sheikh Hasanur to get bail. The accused are now freely issuing death threats to the Patra family.

"Police didn't pay any importance to our missing complaint for Manasi Patra"- claims mother of the victim. Is this how you work @wbpolice? pic.twitter.com/t5cS5PxarD

After a writ petition was filed in Kolkata High Court (HC) by Manik Lal Patra (brother of Manasi) with the assistance of Hindu Samhati, the probe was handed over to state CID. However, CID was recently admonished by HC for not providing any details of the victim’s uterus and abdomen area in their post-mortem report. The case will be taken up for hearing again after the court’s summer break gets over in 1st week of June.

If not for organizations like Hindu Samhati and social media, the horrible deaths of Ruma Mondal and Manasi Patra would have remained anonymous & unlamented, with no hope for justice.