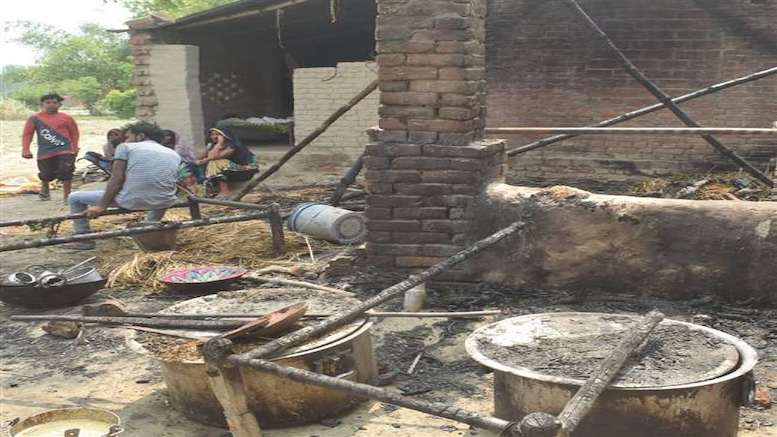 In Jaunpur’s Badheti village, the situation is tense since Tuesday when Hindu Dalit homes were set on fire by villagers of the Muslim community. 35 people including prime accused Noor Alam and SP leader Javed Siddiqui have been arrested.

A 16-year old boy was rushed to a hospital in Varanasi in critical condition and few others were injured as well in the attack. Few livestock were burnt alive.

The trouble had started when some Hindu kids took their buffaloes for grazing. They had a quarrel with children of other community who were out grazing goats, and as per the FIR the Muslim kids hurled casteist abuses and beat them up. The matter soon escalated into a physical fight between elders. For a few hours, the situation cooled down but later at night, people from Muslim community launched a fierce attack on the Dalit Basti and set their homes, sheds & bikes on fire.

While one Dalit boy was referred to a Varanasi hospital, few people such as Atul, Ravi & Pawan were locally treated for injuries. Many people lost their homes with all their property inside in the fire. According to one source, 12 hutments were burned down while 17 houses sustained damage in the arson attack that night in the Dalit Basti. Two goats and one buffalo also died in the fire.

People of Muslim community Zaid, Nabeed & Asif were also reportedly injured in the fight. Some videos of the attack have emerged on social media which could not be independently verified.

The village Badhethi was earlier in news when non-local Tableegi Jamaat members were found hiding in the village’s Noorani Masjid during Covid lockdown. Twelve persons were booked under section 144 then.

As soon as news of the communal attack was reported, police force was deployed in and around the village in huge numbers and situation was controlled to avert further violence. In time, Jaunpur DM DK Singh, SP Ashok Kumar also reached the spot followed by Varanasi Divisional Commissioner Deepak Agarwal and IG range VS Meena.

UP CM Yogi Adityanath has taken strong exception to the incident and asked for National Security Act (NSA) & Gangster Act be invoked against prime accused Javed Siddiqui & Noor Alam. Javed Siddiqui is a Samajwadi Party leader who unsuccessfully contested MLA election from Jaunpur seat in 2016. Yogi Adityanath has also ordered departmental enquiry against police SO for dereliction of duty.

For the victims, the CM has announced compensation package of Rs. 10,26,450 apart from ration and other amenities for immediate need. He has also promised houses to 8 families under Mukhyamantri Aawas Yojana, who have been rendered homeless due to fire.

Samajwadi Party leader Lal Bahadur Yadav alleged that BJP is giving ‘communal colour’ to the incident. He demanded that police should file cases against other side as well and threatened an agitation if ‘innocent’ Muslims who have been arrested were not released. RSS Pracharak Narayan Dubey visited the village to console the Dalit families and assure them of his support.

Meerut medical students 1st in UP to teach MBBS in ‘Hinglish’