Cow Smuggler from Mewat Killed In Shoot Out With Rajasthan Police 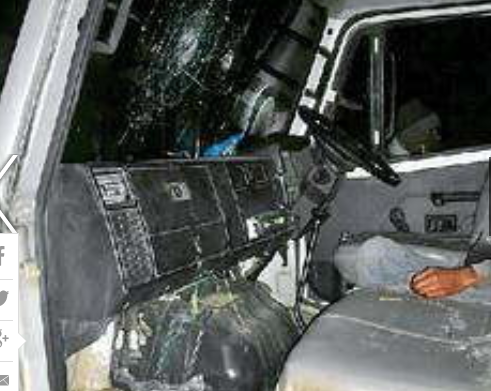 Cow trafficker Taleem, son of Shareef Khan, died in a shoot out between police and cow smugglers in Ramgarh, district Alwar, Rajasthan.

Police said that for the past few nights, the cow smugglers were picking up cattle from the city. On the night of 6 Dec, two policemen patrolling on motorbike spotted them loading cattle into a Tata 407 truck. When challenged, the smugglers ran away. Police set up barricades and checkposts to intercept them, but the smugglers crashed through while firing multiple rounds at police.

Police fired back, and the smugglers abandoned the truck and fled when one of its tyres blew out. When police checked the truck, they found one dead smuggler along with a country pistol (7.62 mm), 2 live rounds, stones and mobile.

They also found 5 cattle, one of which had died – the remaining 4 cattle had their legs and mouths cruelly tied up. The rescued cattle were sent to a cow shelter. Police has lodged a case under IPC sections 307, 332, 353.

Police investigation has revealed that the smugglers were using a stolen vehicle, with the chassis number erased. Now the matter has been handed over to State CID-CB.

This is the second shoot out involving cow smugglers in the district of Alwar, within the last one month. On 9 November, villagers had clashed with smugglers in which one smuggler, Umar Khan, resident of Pahari – district Bharatpur, died while another smuggler, Tahir Javed, got injured.

Incidents of cow traffickers attacking police with firearms are increasing alarmingly. The Muslim majority Mewat district of Haryana is notorious for cow trafficking, and adjoining areas of NCR, Haryana, Rajasthan and Western UP are favourite hunting grounds of these criminal gangs which also have links to terrorists and other anti-nationals.

It is time that police forces of these 4 states – Haryana, Delhi, Rajasthan and UP – join hands to end the menace of cow smuggling which is centred in Mewat. We can only hope the Union Home Minister is listening.