The Haryana police arrested Congress leader Pankaj Punia on Wednesday night from Karnal for his abusive and vulgar anti-Hindu tweet, following a written complaint by a Karnal resident at Madhuban police station.

Another FIR has been lodged against Punia at Lucknow’s Hazratganj Police Station for hurting Hindu religious sentiments following a complaint by one Ashish Singh. He was produced in a Karnal court yesterday and sent on police remand for a day. It is believed he could be handed over to the UP police for further investigation as well.

‘Sanghi’, ‘bhakt’ are slurs routinely hurled by left-liberals and seculars at their opponents, in particular practising Hindus who believe in Hindu civilisational values. The vile distortion of these profound words is a deliberate and malicious act by those who want to make such anti-Hindu abuse mainstream. Such slurs are just a shade removed from ‘saffron terrorist’ and ‘cow piss drinker’ labels used by hardened jihadis & communists to dehumanise Hindus.

The Congress has been plumbing new depths in disgraceful political discourse. Far from regretting, Punia actually continued his bigoted rant by sharing comments made by Congress supporters backing his claim.

His rant came right after Priyanka Vadra failed to provide the promised 1000 buses and Congress stood exposed on its fake concern for migrant labourers. It has become a regular feature for Congress leaders to display Hindu bigotry in an attempt to cover up for their scams, unsubstantiated allegations and false claims. He had added ‘Bisht government’ in his comment meant as an insult to UP CM Yogi Adityanath.

Congress leaders and other seculars are fond of disrespectfully calling the UP CM Yogi Adityanath by his birth name and particularly his surname ‘Bisht’ – this is a clear insult and violation of the Hindu tradition wherein once a sadhu takes sannyas and is initiated with a new name by his guru, he severs all ties with his old identity. The same Congress boot-lickers get upset if their boss Sonia Gandhi is referred to by her Italian birth name Antonia Maino. They have some amazing double standards.

He then attempted to defend his demented remark by connecting it with an incident in Gargi College where girl students were molested by outsiders. Seculars back then had tried to paint a different picture by making false claims that the accused were chanting ‘Jai Sri Ram’ and waving ‘saffron flags’ which finally turned out to be baseless allegations as neither the Delhi police investigation nor CCTV footage substantiated this claim.

Having been called out on this lame excuse and cornered, Punia tried to escape by deleting the tweet but faced a major backlash from Twitter users. He then put out a tweet saying ‘his claims were not linked to any religion’, however by then the real bigotry and-Hindu hatred of Congress was out in the open. Punia did have the rabid anti-Hindu news outlet NDTV by his side which did not find Punia’s tweet “objectionable” going by its headlines on the issue. 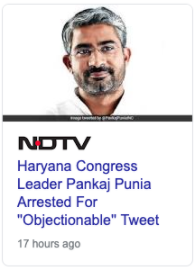 The UP cyber cell Sub-Inspector Suresh Giri has registered an FIR  under IPC sections 153 A (promoting enmity between different groups), 295 A (outraging religious feelings), 505-2 (public mischief), and some sections of the Information Technology (Amendment) Act 2008.