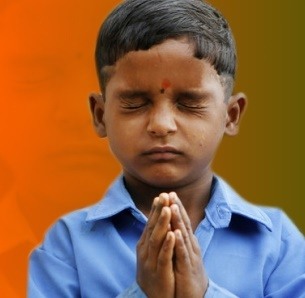 Hindu devotees apply vibhuti traditionally as three horizontal lines across the forehead and other parts of the body to honor Bhagwan Shiva. This verse from the Bible explains the Christian fanaticism against vibhuti and other Hindu symbols –

Ye shall not make any cuttings in your flesh for the dead, nor print any marks upon you: I am the LORD.
-Leveticus 19:28

Instances of Hindu students being victimised & Hindu symbols being banned in Christian educational institutions are commonplace. Some recent examples  –

We have also reported on how the Principal of Mt. Carmel convent school in Delhi, Dr. Vijay Kumar Williams, regularly preaches Christianity and rubbishes Hindu Dharma in morning assembly of his group of schools.

To this, some Hindus will say, “Well, why do Hindu parents send their children to Christian schools if they feel strongly about such things?” To them, the answer is –

India’s education law is spectacularly isolated in the world – there is no country  where the majority community faces special burdens by law in this sector.”

The fact that our education sector is in a mess and that Christian schools have a widespread network across the country, does not mean that they can do as they please & run roughshod over Hindus. We did not win a hard-fought independence from Britain just to sell out our cultural soul to the inheritors of the British colonial attitudes. Hindus are more than capable of running good quality schools, if the Government stops interfering and provides them a level playing field. And the hypocrisy of the whole intolerance and religious fundamentalism narrative peddled by left-liberals, which paints Hindus as indescribably evil out to persecute the poor Christians and Muslims, is just mind-boggling.