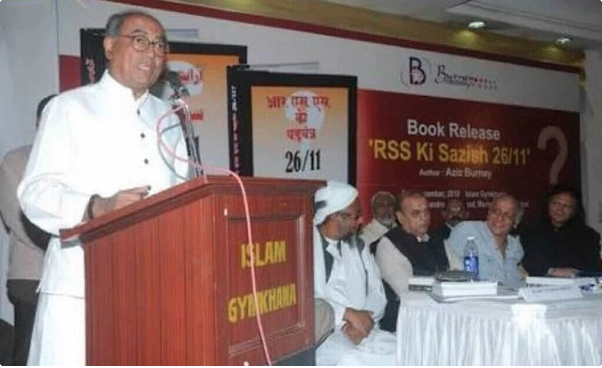 Today, the narrative on the Mumbai attacks of 26/11 has settled down, and facts are more or less known. Ten attackers, trained for a period of over a year by Lashkar-e-Taiba, entered Mumbai and attacked various locations in an act of Jihadi Fidayeen terror, killing 166 innocent Bhartiyas. Even their phone calls with their handlers as they carried out their murder are recorded, and can be heard on youtube. One of the attackers—Mohammed Aamir Ajmal Kasab—was captured alive due to the incredible bravery of late Shri Tukaram Omble. Kasab was tried and hanged for his crimes.

But this was not always the narrative. It has lapsed from public memory that in the immediate aftermath of 26/11, both the Lashkar, and parts of the Congress, tried to pin the blame on the non-existent bogeyman popularly known as “Hindu terror.” It is today hardly discussed that Kasab, and all the attackers, wore Hindu “kalavas” or “maulis” on their wrists. These kalavas had been purchased by David Headley aka Daood Gilani, the LeT terrorist who performed detailed reconnaissance of the targets for the Mumbai attacks. Gilani himself confessed this when he was captured and interrogated in the USA.

In 2012, one of the prime handlers of the attackers, and planners of the attack—an Indian Muslim from Maharashtra named Zabiuddin Ansari, aka Abu Hamza, aka Abu Jundal—was captured in Saudi Arabia and extradited to Bharat, where he serves a prison sentence. He too explained that the idea was to blame Hindus for this attack. He not only corroborated the Kalava story of David Headley, but added more details. Each of the attackers had been carrying ID cards bearing false Hindu names. Kasab was “Sameer Chaudhary” while his accomplice Ismail was also given a Hindu name. Abu Jundal (Zabiuddin Ansari) also clarified that it was supposed to look like “Hindu radicals were upset at inspector Karkare for arresting Sadhvi Pragya etc.” The Times of India carried the story in detail; one can read it here.

Also, within hours, members of the Congress party such as former Maharashtra CM Abdul Rahman Antulay, were also parroting this line. India Today carries perhaps the best record of this set of events in this article:

From the India Today article:

Fake identities: The attackers carried ID cards of Arunodaya College, Hyderabad. The college is genuine but the ID cards were fake.

Blame it on Indians: ‘Kharak Singh from India’ bought the Internet calling service used by LeT handlers. His IP address was in Pakistan.

This Aziz Burney is the same person who wrote the ridiculous book “26/11: RSS ki saazish” which was launched by Digvijay Singh.

Now, all of this shows without doubt that the LeT and some parts of the Congress had similar intentions. That does not mean they were co-conspirators, of course. But it does point to a very disturbing fact:  that parts of our main opposition party have similar inclinations as the LeT!! Both, in some cases, “want the same thing to happen.” That itself is a matter of grave concern for any patriotic Bhartiya.

I conclude with some tweets by serious journalists and authors who also expressed alarm at the attempts by the LeT to pin the blame on Hindu terror.