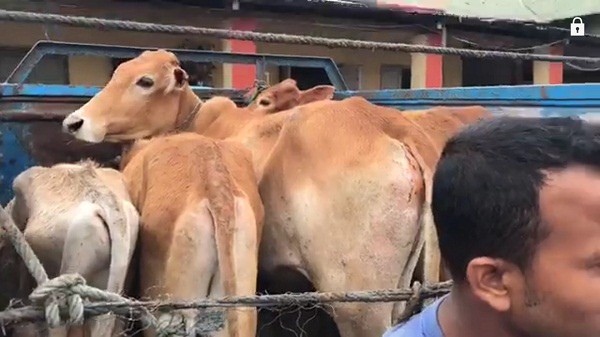 On April 21st, BJP Tripura Incharge and National Executive Committee Member, Shri Sunil Deodhar intercepted a tempo transporting 5 cows illegally in Bishalgarh, Tripura. He was returning from the house of a BJP volunteer Sunil Ghosh who has been issued life threats by communist CPI (M) members for supporting BJP. Shri Deodhar had gone to console Sunil Ghosh and while coming back, as he saw this small tempo carrying cows driving hurriedly, he called the police and Yuva Morcha volunteers.

The police confirmed that the driver was neither carrying any driving license, nor papers of the vehicle. There was no number plate on the tempo. The driver told his name to be ‘Rajib Hussain’. Out of 5 cows, couple of them were little calves. Shri Deodhar tweeted the incident :

#CPM govt in Tripura is involved in illegal cattle smuggling to Bangladesh. I intercepted a tempo carrying 5 cows & handed over to police. pic.twitter.com/haz8AkqDLs

The tempo was then taken to Bishalgarh police station, where Shri Deodhar addressed the Yuva Morcha voulnteers and he blamed the CPI (M) government and CM Manik Sarkar for all kinds of rampant smuggling going on in the state. He said that these illegally transported cows are taken to Bangladesh (Tripura is bordered by Bangladesh on three sides). Here is the video of his short address :

The Bangladeshi media too reported the news, terming BJP volunteers as ‘gau rakshaks –  Hindu nationalist right-wing federation of cattle protection movements in India’.  The news seems to be missing from Bharat’s newspapers and major news portals though.

Here are some pictures of the incident :

The BJP Yuva Morcha Volunteers have taken the responsibility of the rescued cows.

(We thank Mr. Ajinkya Chopde and Karan Sharma for speaking to us).