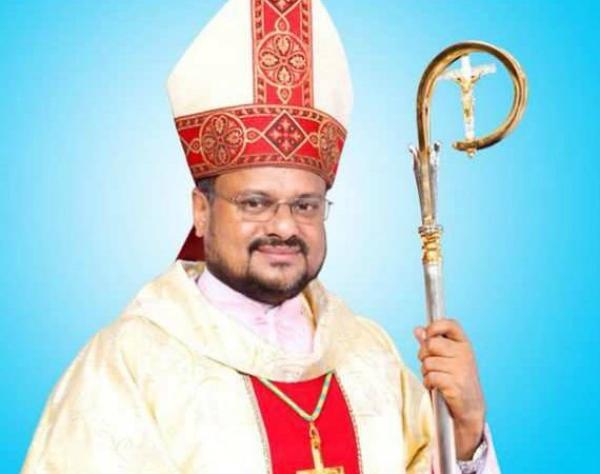 Bishop Franco Mulakkal of the Latin Catholic Church’s Jalandhar Diocese offered Rs 5 crore and a top position to a nun to stop pursuing rape charges against him, the nun’s family has alleged.

According to a report in Daily Pioneer, the Bishop had conveyed the offer through a friend in Kalady near Kochi, according to the nun’s brother who is himself a Catholic priest. The brother reported this to the Kerala Police team probing the rape case.

The Bishop had offered to give Rs 5 crore and any top position of her choice for the nun in the Missionaries of Jesus Congregation, which is under the control of the Jalandhar Diocese, in return for the nun and her family to stop pursuing the case and to not hand over more evidences against him to the police or the media.

The nun’s brother said the Bishop had made the offer after an audio clip of a phone conversation between the nun and Cardinal Mar George Alencherry, head of the Syro-Malabar Catholic Church who is already facing the charge of involvement in a multi-crore rupee land scam, which revealed that Cardinal Alencherry had lied to police about not knowing of the nun’s rape by the Bishop, was released by him. In the audio clip, Alencherry is heard suggesting the woman to register a complaint with the President of the Catholic Bishops Conference of India, Cardinal Oswald Gracias, based in Mumbai.

The nun’s brother also said that the family was planning to lodge a complaint directly with CM Pinarayi Vijayan on the delay from the part of the police in arresting the Bishop, despite the fact that there were sufficient evidences against him. Bishop Mulakkal is said to have close connections with top political leaders in Jalandhar, Delhi as well as Kerala.

One month after charge, Bishop hasn’t even been questioned

The nun had lodged the rape complaint with the Kottayam district police chief on June 27, after exhausting all avenues within the Church. She approached the Church leadership at all levels starting with the Vicar of her parish, Kodanad to the Bishop of Pala diocese, Cardinal Mar Alencherry and even the Vatican directly by e-mail and through its envoy in Bharat but help came from nowhere, she said. Cardinal Alencherry had last week said the nun had not given any written complaint to him.

According to the nun’s complaint to the police, the Jalandhar Bishop had sexually abused her using threats 13 times between 2014 and 2016. He had first raped her in a guest house attached to her convent at Kuravilangad in Kottayam district on May 5, 2014 when he had visited Kerala for attending a Church programme in Thrissur district, she said in the complaint.

The Bishop has lodged a counter complaint with the police alleging that he was the victim of a ‘conspiracy’ by the nun. As per reports, police have already verified the incidents and the places and the dates of their occurrence. But they are yet to summon the Bishop for questioning, or go to Jalandhar.

Meanwhile, pressure is reportedly mounting on the nun for withdrawing her complaint against Bishop Mulakkal. A six-member team from her congregation in Jalandhar is said to be trying to influence her with the help of some priests from Thrissur. This team has also been meeting the nuns and priests who have been supporting the victim.

This case is one of several that have come to light in which senior Christian clergy have been accused of rape, sexual abuse and financial crimes. In almost all cases, it was found that Church higher-ups had tried to hush-up the matter or hand out light punishment for offending priests after ‘internal enquiries’.

In the land scam where Cardinal George Alencherry was charged with causing loss of Rs 90 crore to the Catholic archdiocese of Ernakulam, after an internal probe, the Vatican divested the Cardinal of administrative powers – but when a petition was filed against him in Court, the Cardinal stated ‘only the Pope had the authority to take action against him’.

There have been many instances where the Church is seen to have cited the canon law to side with priests, otherwise liable to be tried for cases under the civil and criminal laws. We quote a few such cases listed in this article –

The Indian secular state’s obsequiousness – and this includes all 4 pillars i.e. judiciary, legislature, executive and media – while dealing with such rogue Godmen belonging to the ‘minority’ religions of Christianity and Islam, couldn’t be more obvious. This tweet sums up how English-language mainstream media has gone about trying to sanitise two serious criminal charges against Christian organizations from recent times –

Our state and civil society want to micro-manage and control every Hindi institution and aspect of Hindu social & religious life, but they steer clear of challenging the two globally hegemonic, organized religions. Will our courts ever deliver justice to these Bharatiya Christians who are suffering in silence at the hands of their supreme Godmen? If not, all these secular sermons are just plain hogwash.