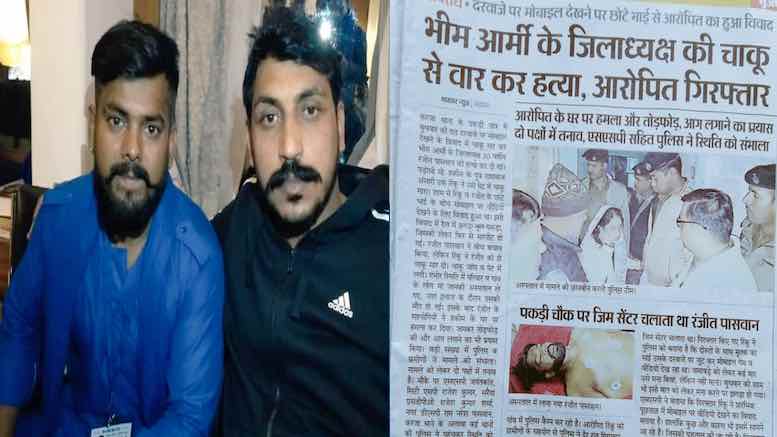 A Dalit youth and district president of Bhim Army, Ranjit Paswan (30), was stabbed to death by neighbour Shahbaz Ansari over a minor dispute on Wednesday night in Muzaffarnagar district, Western UP.

As per Dainik Bhaskar, a dispute between Ansari (s/o Mohammed Hakim) and Ranjit’s younger brother over watching mobile videos near the former’s house in Pakri village, descended into a physical altercation in which Ranjit was stabbed when he tried to intervene. However, police is also investigating some other motives which have come to light.

He was rushed to a nearby hospital where he passed away during treatment. After his death, Ranjit’s associates attacked Ansari’s house, vandalised it and tried to set fire. Heavy police force was rushed to the spot and managed to control the situation, which continues to be tense.

The accused was arrested late night with the help of villagers. The victim used to run a gym near Pakri chowk.

Some radical Ambedkarite news outlets mourned Ranjit’s death, terming him an ‘Ambedkarite missionary’. It must be noted that Bhim Army, led by its controversial chief Chandrashekhar Azad alias Ravan, was at the forefront of supporting Islamic groups during the anti-CAA protests. Ironically, the CAA law was passed to primarily help the beleaguered Hindus, mostly Dalit, living in Bangladesh & Pakistan who are the receiving end of brutal persecution by Islamists.

The stridently anti-Hindu Bhim Army has also been in the news for attacking Dalits to stop them from worshipping Hindu deities and to desecrate temples. The party is also an advocate of Bhim-MIM unity, a reference to the alliance seen between some Dalit groups and the Hyderabad-based Islamist outfit AIMIM.