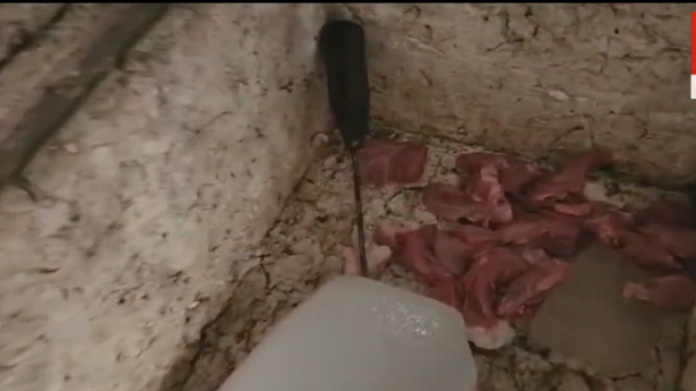 Faizal runs a sugarcane juice in Uttar Pradesh’s (UP) Bareilly. He has been accused of mixing meat in the juice. A ground report by Sudarshan News pointed out that Faizal was supplying adulterated juice. According to some citizens present there, Faizal owns two juice shops.

The video shows a plastic bag placed next to the ice in the ice-box. The black plastic bag contained meat. Hindus who fast come to drink at the store. It is well-known that Hindus don’t consume meat during certain days of the week and certainly not during fasting days. Therefore, this appears to be a deliberate attempt to hurt Hindu religious sentiments by feeding meat to Hindus stealthily. Also, why should sugarcane or any juice contain meat?

From throwing meat at Hindu religious processions to stealthily feeding meat to Hindus, Muslims are deliberately hurting Hindu religious sentiments. This stems from the radicalisation and brainwashing done in madrasas and by imams and maulanas. Bareilly police should take strict action against Faizal. Hindus also need to be alert and boycotting appears to be the best option.