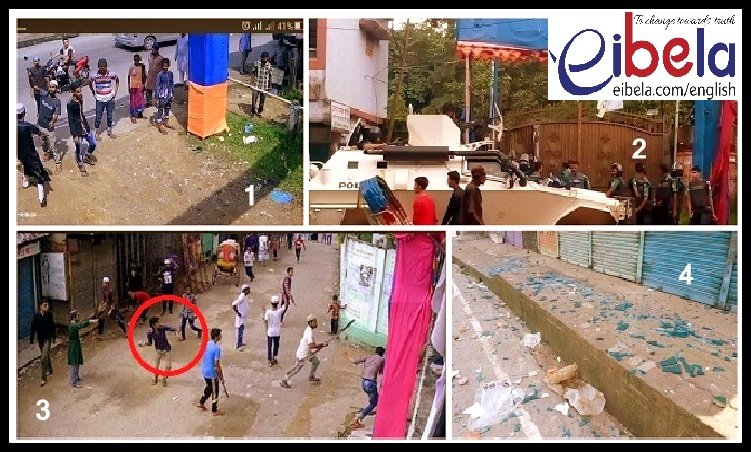 In yet another attack on a Hindu temple in Bangladesh, seven people were injured after local Muslims attacked the ISKCON temple at Kajal Shah area of Sylhet city in Bangladesh, while a children’s painting competition was going on in the temple. Their excuse – the temple was singing Kirtan and playing drums during the Muslim Friday Jumma prayer – a special prayer held every Friday just after noon; over and above the 5 times a day prayers.

The temple was attacked by pelting bricks, stones and other items; 7 people were injured, including a former lady councilor. Timely police action and the fact that the temple gate was closed prevented the situation from going totally out of hand. 15 people have been arrested thus far. 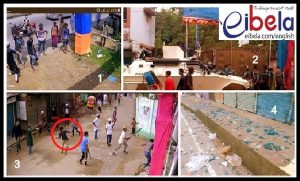 While media in Bharat has covered the incident in brief, Bangladeshi news site eibela.com provides the details and reveals the deceit used to justify the attack. It says that as per police the initial call to attack the temple was made by the local Imam of the mosque using a mike – the Imam asked Muslims to assemble and march towards the temple for it was creating a hindrance in their path of “getting blessings from Almighty.”

The ISKCON temple’s youth coordinator Devarshi Srivas narrated that on Friday a sit and draw competition for the children was organized which was accompanied by the customary Hare Krishna mantra chanting. The electronic mikes were not in use which kept the sound quite mild and confined within the temple premises. However at the mosque the Azaan and the Imam’s clarion call were made using electronic microphone, which shows that ‘mantra chanting causing a disturbance’ was just an excuse used by the Islamists to garner the sympathy of the local Muslims while the real intent was always to attack the temple.

While this is a clear case of Islamists inventing a reason to attack Hindus, it anyway says a lot about the tolerance & mutual respect for other faiths in the Muslim society of Bangladesh that Hindus singing kirtan in a temple during Muslim prayers is perceived as a genuine affront.

Eibela has also provided a video of the attack which was captured in a CCTV camera – one can see a crowd of around a dozen Muslims (many appear to be minors) throwing stones and trying to wreck the temple exterior with sticks. A boy of 7-8 years and an elderly man in his 60s can also be seen throwing stones.

Taking offense at temples playing bhajans, doing aarti etc., alleging ‘disturbance’ to peaceful Muslims doing namaaz (Muslim prayer), is an old Islamist ruse to achieve their end goal – demolish or desecrate Hindu temples and strike fear in the heart of the kafir (non-believer, idol worshipper). Lying in furtherance of the Islamist goal of eliminating all other belief systems is permitted under the doctrine of Taqiya

Moradabad, UP – Muslims object to loudspeaker in Sant Ravidas mandir, police barge in to temple which is situated in a Dalit dominated locality and forcefully remove loudspeaker. When Dalits protest, they are lathi charged.

Jammu, J&K – Muslim youth led by a woman tried to intervene physically to prevent the use of the loudspeaker by a temple – leads to tension in the area.

This Indian Express article captures the communal violence witnessed in UP over a 10 week period in 2014 – 120 out of 605 communal clashes were triggered by the use of loudspeakers at places of worship. While the IE journalist predictably links the unrest to politics and mostly blames BJP/Sangh for ‘vitiating the atmopshere’, one remark in the report is quite revealing: “In nearly all of these 120 cases, a familiar pattern was seen: temple loudspeakers competed with loudspeakers of the azaan; and a new and aggressive Hindu insistence on the right to use loudspeakers triggered Muslim reaction.“

So everything was fine as long as Hindus put up with azaan blaring 5 times a day from mosque loudspeakers, but their ‘aggressive insistence’ on temple loudspeakers has upset Muslims!

This member of a temple committee says it best, “The temple uses loudspeakers only occasionally. What about the masjid? Their radio (loudspeaker) blares throughout the year. Have we ever objected?”

It is time that every right thinking citizen of Bharat evaluate the distorted idea of secularism that our intellectual and political class have foisted upon us. Unless we can make Bharat safe for Hindus, we have little chance of effectively fighting for the rights of Hindus in Bangladesh.