Tensions were high in Bharaich town of UP after Hindus protested against repeated sexual harassment of schoolgirls and other women by 7 Muslims in Salar Ganj locality.

Dainik Jagran has reported that locals have accused Irfan, Sharib, Aamir, Fardeen, Sajid, Nihal, Ubaid of often performing obscene acts and harassing school-going girls and other women in the area. If anyone opposed them, they would threaten physical harm.

Finally, on Tuesday evening lot of local Hindus gathered on the streets to oppose this sexual harassment, and this led to a faceoff between both communities. Dargah SO (Station Officer) reached the spot with a large force to resolve the situation.

Agitated crowd submitted their complaint against the 7 accused and had to protest till late in the night before police finally arrested 4 of the 7 – Sharib, Nihal, Fardeen and Ubaid.

This sort of sexual harassment, also known as ‘eve-teasing’ (an outdated colonial-era term) throughout South Asia, is extremely frequent across UP. The problem is especially acute in areas where the ‘minority’ community has substantial numbers.

That is why women’s safety has always been a big election issue in UP. Hence, when Yogi Adityanath was sworn in as CM, people of UP were hoping for some action on this front, so that women of the state could move about with dignity. Yogi’s decisions to create ‘anti-romeo’ police squads (now renamed as Nari Suraksha Bal – Womens’ Protection Force), who would be stationed outside schools and in public spaces to tackle exactly the kind of harassment that just occurred in Bahraich, was widely welcomed by common citizens.

But of course, what appeals to the aam admi is anathema to the durbari intellectuals sitting in Delhi. Not surprisingly, there was a deluge of propaganda in English language media against the move – 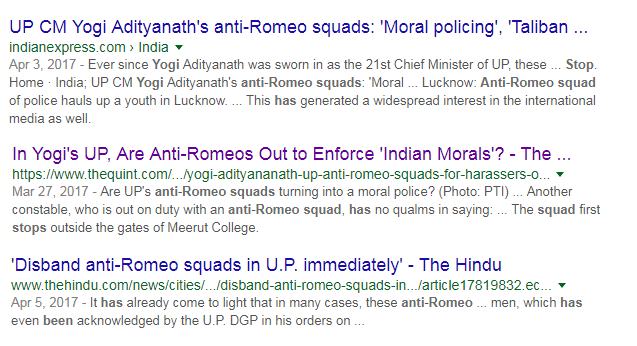 It is no one’s case that some cases of overreach by police would not have occurred as part of this drive – police has to correct itself in those cases. But there is no denying that the measure has instilled some confidence in countless girls.

Yet, as recurring news in Hindi language media shows, UP’s streets are still not safe for girls. Why is police not able to pro-actively identify the elements who are known sexual harassers and arrest them? Why does it take street protests and agitations to catch the authorities’ attention?

Society needs to ask itself why sexual objectification of women has increased? What impact does Bollywood have on young minds, where the heroines now perform ‘item’ songs with shocking lyrics, stalking is almost condoned as a means of courting a girl, and girls are encouraged to equate ‘bold Western dresses’ with self-confidence and modernity.

What we also need is a public campaign, a la the Swachh Bharat campaign on TV & radio, to drill home in boys the ill-effects of this ‘eve-teasing’. And in particular, Muslim youth have to be taught in their homes and by the state that just because a girl is not wearing hijab, niqab or burkha does not mean she is of “loose character” and “asking for it.” Religious doctrine which views kafir (non-Muslim) woman as a piece of meat should be done away with.

(We thank @divyaSoti for bringing this news to our attention.)