BJP MP & Union Minister Anantkumar Hegde had a near escape last night in an ‘accident’ on the national highway, near Halageri in Ranebennur taluk of Haveri district.

In a series of tweets, the MP said that a truck which was parked horizontally (perpendicular to the road) suddenly came to life as his convoy was passing and tried to ram his car, but missed since his car was being driven at a high speed. However, the truck crashed into the escort vehicle behind, causing a serious shoulder fracture in one of his staff.

The truck driver named Nasir was apprehended by locals who gathered at the spot. The driver did not appear intoxicated, and Hegde called for a detailed police probe into the matter. 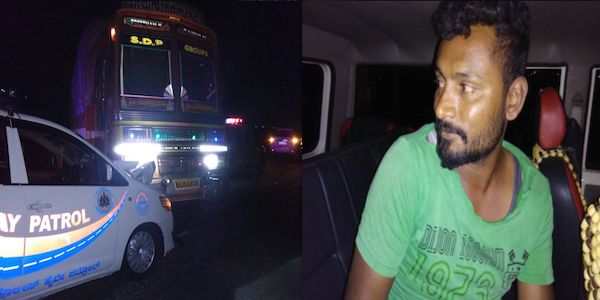 This ‘accident’ comes just a week after Telengana MLA Raja Singh had a narrow escape on April 8 while returning from Beed (Maharashtra) to Hyderabad after attending a Dharma Sabha. In that incident too, a truck was involved and tried to ram the MLA’s car but missed and instead crashed into a car behind seriously injuring passengers in the other car.

The owner of the truck is one Mohammed Gaffar, the MLA shared after looking up the Hyderabad Traffic Police website. Later that day, the MLA also received a WhatsApp message from an unknown number threatening that he would not survive ‘next time’. True Caller shows that the number (+965 6562 4980) is from Kuwait and registered in name of one Imran Fr.

Raja Singh and Anantkumar Hegde are known for their strong, uncompromising views on Hindu issues, and it is highly likely that they are on the hit-list of several Islamist organizations that have grown from strength to strength down South, under the benevolent gaze of Congress, Left, Dravidian governments.