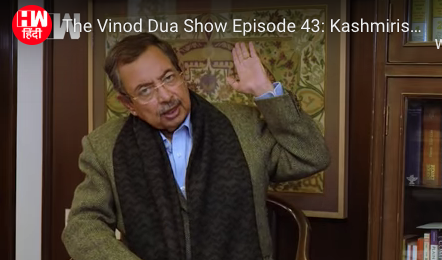 Dua also mocked the inability of Hindu activists to cross over into Pakistan, before cleverly putting a disclaimer that he is ‘not suggesting they do so’ since it would be ‘illegal’.

He made these staggering comments on his video blog The Vinod Dua Show for HW (Hindu World) News. Dua, who is facing an internal investigation at the far-left news outlet ‘The Wire‘ for two accusations of sexual abuse that surfaced during the #MeToo movement & was also recently found to have doctored a video interview of Union Minister Nitin Gadkari, made the comments at 8:20 in episode 43 of his show –

An exact translation of these comments is –

“The boys (sic) who comes from Pakistan are not Army soldiers, they belong to non-government organizations (sic) like Jaish-e-Mohammed, Lashkar-e-Jhangvi etc. Here too, we have boys of Bajrang Dal, Vishwa Hindu Parishad, Akhil Bharatiya Vidyarthi Parishad (RSS student body)..why don’t they go there(to Pakistan), like those people come here? But we are not suggesting that these people (Hindu activists) should go there – that would be illegal, it would be terrorism. And anyway, we don’t know if these people have the capability to go there (as terrorists to attack Pakistan). They want to take revenge from Pakistan on Indian soil.”

The focus of this episode of Dua’s show is the alleged violence that he claims is raging across the country targeting innocent Kashmiris – he starts by gratuitously informing us that he is not saying the situation is akin to the ‘targeting of Sikhs during the 1984 anti-Sikh pogrom’ or the ‘targeting of all Muslims during the 2002 Godhra riots’.

He praises the Sikh community, and rightly so, for fully integrating themselves with the mainstream after putting behind the horrific events of the Congress-sponsored anti-Sikh pogrom that swept across Delhi and other cities in 1984 following Indira Gandhi’s assassination. But where Dua loses the plot is in trying to shame & guilt-trip Hindus (without naming them, of course) for the alleged bigotry against Kashmiri Muslims, by giving the examples of Sikhs. Shouldn’t he be holding up the examples of Sikhs to the Kashmiri Muslims, instead?

The way Sikhs ultimately rejected political gamesmanship and an ISI-sponsored terrorist insurgency, to reassert their faith in the Indian Union is indeed something that the Kashmiri Muslim population must emulate. But propagandists like Dua will not tell you that Kashmir is currently under the grip of such radical Islamist thinking that even a proposal to transfer merely 0.4 sq km of forest land for temporary shelters to Hindu pilgrims of the Amarnath Yatra ignited a massive outcry and protest which led to death of over 40 people in J&K state in 2008 (when the state was under Congress rule).

Kashmiris are a part of Bharat, and the fact that they have been studying and living in various states (even while some extremist Kashmiris refuse to return the favor to the other citizens of Bharat by supporting removal of Article 370 & 35A and fully integrating with the country) is testament to that.

But when the whole nation was grieving after the Pulwama attack, when some of our own citizens (and this included both Kashmiris & non-Kashmiris, Muslims and Hindus), exult over the death of our CRPF jawans, are the rest of us not supposed to even counter them and alert the authorities? Does Vinod Dua want the people of this country to turn a blind eye to those calling for the dismemberment of the nation?

Dua ends his program by talking about a handful of leaders who have jumped ship from BJP to Congress or have been strident dissidents of anything & everything this Government has done, and makes the absurd claim that these dissidents have reduced the Modi-government to a ‘minority Government’ which is desperate to incite Hindu-Muslim riots keeping the upcoming elections in mind.

He makes the obligatory reference to the Ram Janmabhoomi (RJB) issue, by talking about the upcoming Supreme Court hearing on 26 Feb, and claims that vikas (development) has been long forgotten (in favor of issues like RJB). But he evades a very simple question in doing so – shouldn’t every Government try to resolve this long-dragging case which has been stuck in our judicial system for over 70 years? Why do people like Dua and others in the Congress ecosystem want this case to be delayed indefinitely?

Apart from the regular video blog show he is doing for HW News, Dua is also still the Consulting Editor for The Wire as its editor Siddharth Varadarajan confirmed recently. Vinod Dua’s daughter, Mallika, was also in the news recently for displaying extreme insensitivity towards the supreme sacrifice of the CRPF jawans murdered in Pulwama, in an online rant about how “people die every day, do we keep mourning all of them?”

Dua is a big name in journalism, especially Hindi journalism, and he has anchored several famous shows on Doordarshan and other private channels like NDTV. His parents migrated from Dera Ismail Khan in Khyber-Pakhtunkhwa province of Pakistan at the time of partition, and in an interview he described himself as a ‘Hindu Pathan’ and said that ‘he never heard any stories of misery or torture from his parents as they didn’t really suffer’.

Although at times he has criticized Congress governments too, his staunch secularist beliefs place him firmly in the Congress ecosystem, and not surprisingly he was awarded with the Padma Shri in 2008 alongside fellow journalists Rajdeep Sardesai and Barkha Dutt. After the advent of the Modi Government, Lutyens’ journalists like Dua have been especially hard-hit as their oxygen – the access and patronage system they feel entitled to – has been cut off. But whatever the rationale, his descent into such naked bigotry and blind hate for the PM is inexcusable.

It is stunning to see that such warped individuals like Vinod Dua, who can even go to the extent of white-washing a terrorist state like Pakistan in order to besmirch ideological opponents in their own country, continue getting such primetime space in the media ecosystem.