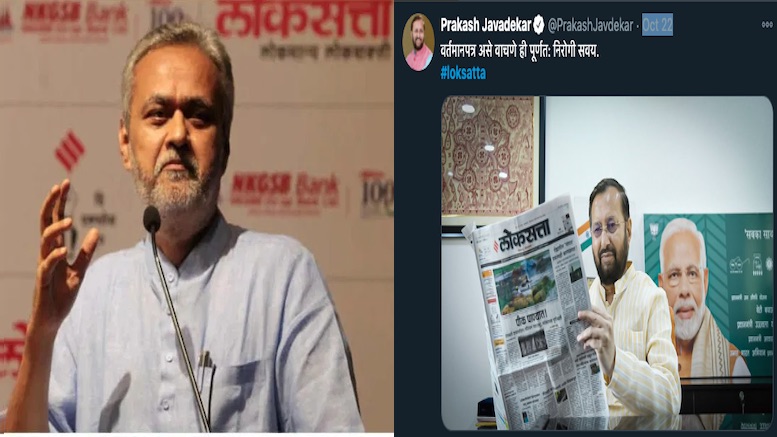 Union Minister Prakash Javadekar found himself on a sticky wicket when his attempt to promote the habit of reading newspapers sparked a controversy.

Shri Javadekar, who holds three heavy-duty portfolios of Information and Broadcasting, Environment, Forest and Climate Change, and Heavy Industries and Public Enterprises, shared a tweet with an image of himself reading the Loksatta Marathi newspaper (with a portrait of PM Modi in the background). The tweet also contained text in Marathi which reads ‘Reading a newspaper is a healthy habit.’ and the hashtag #Loksatta

However, astute observers were quick to point out that Loksatta, a Marathi newspaper published by the Indian Express group, has been a virulent critic of the NDA government with editor Girish Kuber exhibiting the usual signs of MDS (Modi Derangement Syndrome) like terming the PM feku (faker) and HM Amit Shah tadipar (externed).

While most of Marathi media is in the pseudo-secular camp and in awe of Sharad Pawar’s brand of divisive, manipulative, anti-Hindu politics, Girish Kuber and Loksatta are especially egregious examples.

Leftist mainstream Indian media in one snap. It's 'alleged' naxal sympathisers but not so alleged 'hindu extremists'

Recently, Kuber was outed as a plagiariser for passing off a blog post by UK based economist as his editorial. Like most self-avowed seculars in Bharat, he is a polished apologist for Islamic terrorism – months after the 26/11 terror attack, he wrote a Marathi book claiming the current terrorism is a ‘by-product of the energy wars waged by Western powers who are exploiting Islamic countries’!

But Shri Javadekar is no stranger to such bloopers. He was managing the crucial HRD (Human Resource Development) ministry during the first 5-year term of the Modi govt., and in Sept 2018 had stated with misplaced pride during an India Today Education Summit that the Modi govt. had ‘not rewritten a single history chapter in 4 years’.

The anti-Hindu Lutyens’ establishment has successfully stifled any step towards much-needed school & college curriculum reform by demonising such attempts as ‘saffronisation’, thus preventing the detoxification of textbooks, especially those related to history, which have been doctored by successive generations of Marxist & pseudo-secular academics.

Certain ministers in the Modi cabinet need to outgrow this need to appease the anti-Hindu cabal in Delhi and state capitals. This approval-seeking behavior may win them some condescending pats on the back from influential Hinduphobes, but it hurts the larger interests of society by legitimising this harmful cabal.

It might also have the unintended consequence of dampening the enthusiasm of the Hindu vote which remains BJP’s only unwavering voter base despite 6 years of earnest ‘sabka saath, sabka vikas’ policies.