Understanding the Charges Against Sadhvi Pragya 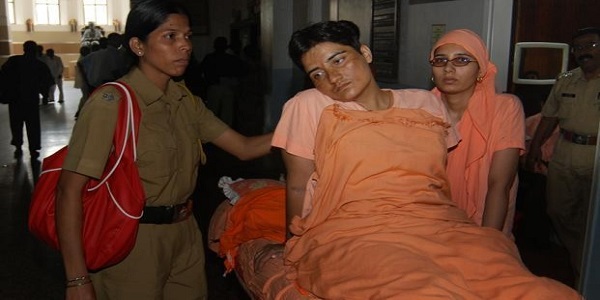 These days, the term MCOCA is bandied about by several internet/media “pundits” who probably are not even aware of the complete form of this term. MCOCA stands for Maharashtra Control of Organized Crime Act (1992). As the name explicitly states, it was intended to combat the threat of organized crime. Indeed, section 2(e) of this act takes great pains to define organized crime:

Organized crime means any continuing unlawful activity by an individual, singly or jointly, either as a member of an organized crime syndicate or on behalf of such syndicate by using violence, threat of violence or forcing or any other unlawful means with the objective of gaining pecuniary benefits or economic advantage for himself or any other person or promoting any kind of revolt or uprising.

It also takes pain to clarify that only those indulging in organized crime are to be charged under this act. What does the act do, in particular, to combat organized crime? Here is the important detail internet/media pundits are unaware of. The crucial power that the act gives provisional MCOCA courts is this: the testimony of a witness need not be recorded in front of a magistrate, as in ordinary cases. Instead, it can be recorded in front of a police office – that is sufficient.

So the first question that arises is that why was the Sadhvi even charged under a MCOCA law that is meant to fight organized crime?

Indeed, try as hard as they might, the ATS in trying to frame the case against her was unable to produce a single witness to testify in front of a magistrate. They tried many other things, they subjected the Sadhvi to not 1, not 2, not even 4 (the legal maximum), but 17 narco tests.

Finally, the NIA took over the case in 2011, at the behest of the government when the Congress was in power. After 5 more years of painstaking investigation, of which 3 years were under Congress rule, the NIA filed an additional supplementary chargesheet in the case in 2016. The chargesheet can be read in full at http://www.nia.gov.in/writereaddata/Portal/News/65_1_PressRelease13052016.pdf

I produce below the relevant excerpt: Note that the NIA is also saying that since MCOCA is not really applicable here, the entire witness testimonies collected by the police and ATS (probably by beating the witnesses black and blue till they “testified”, which is why not one of them was ever produced before a magistrate) are no longer valid or relevant to the case.

One wishes that “award winning” journalists and their like, who use newspaper columns to rant against people whose thinking does not match their own, would do some serious reading before naming someone “anti-national.”

No, Sadhvi Pragya is not anti-national. She has been acquitted by the NIA of MCOCA charges, and their final chargesheet clearly states, in technical jargon, that “she is innocent” (simple speak for “prosecution against them is not maintainable”). Notice also the intellectual dishonesty and cunning of these “award-winners”; not once in the article do they mention that the Sadhvi is cleared of charges by the NIA chargesheet. Do these people know more than the NIA investigators of the case? (Perhaps that is what it means to say they are “award winners”)

If mere accusation, followed by 9 years of being held in jail and torture, constitutes “anti-national” in our country, then God save us.  Rather, I would say that Sadhvi Pragya is a true hero: someone who was persecuted falsely, by crooked politicians out to frame saffron-wearing Hindus for their electoral politics, and finally found innocent by our legal system.

She is a hero for withstanding torture, withstanding far more narco tests than is allowed by our system, for coming out of all that alive and strong, not shattered. Someone who still wants to serve her country and her samaj. How many of the liberal coterie that rules the English language media can say the same about themselves, how many of them could have withstood what the Sadhvi did, and come out of it with a desire to still serve their country?

I am aware that there are still some charges against her that are pending; however, the NIA chargesheet itself is quite categorical, it simply says that the prosecution in all cases against the Sadhvi is not maintainable. One feels it is a matter of time before these other charges are also dropped.