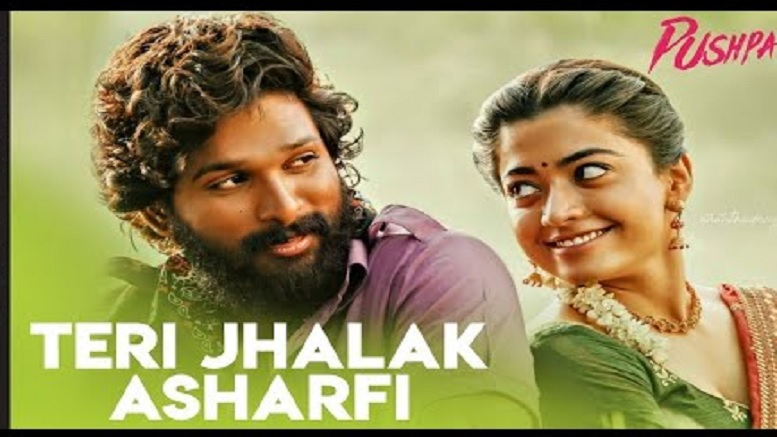 A recent meme on Shashi Tharoor leaning forward to smilingly listen to Supriya Sule during a Parliament session, both oblivious to Farooq Abdullah delivering an impassioned speech in the row ahead, has gone viral.

The meme video has been set to background music from the hit song “Teri Jhalak Asharfi” for the movie Pushpa. The track is sung by Javed Ali, music composed by Devi Sri Prasad while lyrics are penned by Raqueeb Alam. The video and movie is directed by Sukumar Bandreddi and published under the label of T-Series.

The song’s lyrics are in Urduized Hindi and they can be read here (a Hindi version is available here). Let’s look closely at two couplets (original words are followed by the English translation in red) –

Your friends are plain and ordinary (looking)
Compared to them you are better (looking)
As soon as she reaches her 16th sawan (rainy season)
Not just you, every girl looks like a flower bud

A red saree clinging to a bamboo stick (thin, not fully-developed girl)
Even she looks like a princess
With earrings, bindi and flowers in hair
Even their beauty (of such minors) is enhanced

Interestingly, the site which has provided the lyrics has wrongly translated solwan as 18, whereas it means 16th, thus referring to girls who are 15-16 years old.

The sexual undertones, and lusting after still developing minor girls is clearly evident in this song. Sample this lyric “Naina Madak Barfi” i.e “eyes like intoxicating sweets”, or barfi made of opium and paan. Any doubts can be cleared by seeing the picturization of the song.

Yet, we have grown so inured to such lyrics, mostly in Urdu, that such things just don’t register with most people who get sucked in by catchy tunes and cinematography. As the indefatigable @GemsOfBollywood informs us, lusting after underage girls is a an old Bollywood (aka Urduwood) obsession – exhibit A, exhibit B, exhibit C. Also, if you are wondering why the song calls minor girls phoolo ki kali (flower bud), not phool (flower), this clip should explain it for you. Another variant of this pedophilic, leceherous reference to teenage girls is kamsin kali.

The POCSO law, designed to stop sexual offences against children, defines a child as any person below the age of 18 years. How did this song clear the censor board, when it is clearly sexualizing minor girls? The film Pushpa has a UA rating, meaning parental guidance for children under 12. And then the same Bollywood celebs and talking heads turn around and try to guilt-trip entire Hindu society when instances of stalking and sexual assault of minors are reported?

Let’s not forget that Nikita Tomar was being stalked by Tauseef Ahmed since her school days when she was a minor and was finally shot dead as she was coming out of college. Not a day goes by when news of minors being stalked and lured on social media does not get reported.

And this is not all, there is a religious undertone too in the song by Raqeeb Alam. “Rab Jo Poshida Hai
Usko Nihare Tu, Aur Jo Garveeda Hai Usko Taale Tu” (you gaze/behold God who is invisible, but ignore the admirer/believer) croons the singer Javed Ali at the exact moment when the female lead is shown worshipping a temple deity, ignoring the hero standing next to her.

Hindus go to temples to worship their deities who are consecrated in murtis – so God is very much visible when one goes to the temple. But Dharma also says that paramatma (primordial Self, absolute reality) cannot be perceived with the sense organs. So for us, God can take various forms – visible and invisible.

What is this obsession of our film industry to juxtapose Dharma with romance, and talk of choosing one over the other? What are they subtly trying to convey? Will these lyricists and directors show a Muslim girl offering namaz with a song in the background asking her to choose her lover over Allah? Can they even contemplate such a choice, and how would Muslim society react to such a music video?

As for normie Hindus, when they don’t even realize how the word ‘Kaafir’ and its usage is being used to dehumanize and otherize them in Bollywood songs, expecting them to understand the issue with ‘rab jo poshida hai..‘ is a tall order. But the pedophilia promotion in this song should be clear for all to see. Hopefully, CBFC, Ministry of women and child development, NCPCR are listening.