Why No Pellet Gun Against Jallikattu Protesters, Demands Media

Our English language media icons never fail to raise their voice and ask questions of those in power, notwithstanding the way media is being muzzled under the fascist Modi Government as they claim. As peaceful Jallikattu protests have been hijacked and degenerated into mob violence in certain parts of Chennai, two doyens of English language media have raised an interesting question – 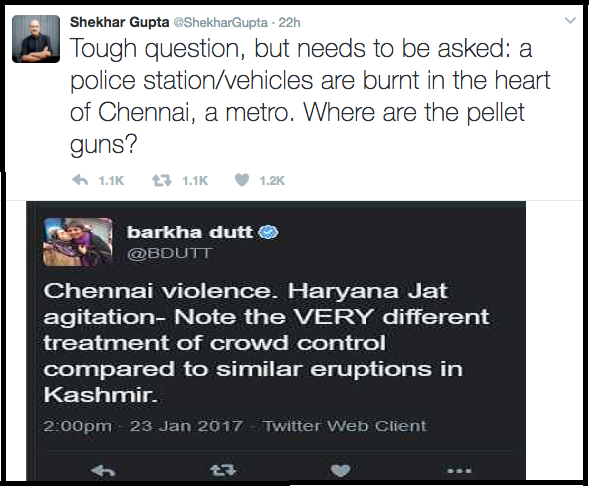 The casual comparison of two entirely different scenarios seems puzzling, but since these are senior professionals with years of experience, maybe they know something we don’t. On the face of it, the following facts stand out –

1.)  The present volatile situation in Kashmir is the culmination of a decades old terrorist insurgency, which kicked off with the ethnic cleansing of the valley’s minority Kashmiri Pandit population in 1989/90. Terrorism in Jammu & Kashmir is directly aided and abetted by Pakistan and has led to deaths of 6274 security personnel and 14741 civilians as per South Asia Terrorism Portal. Before the 2016 disturbance in Kashmir valley over LeT terrorist Burhan Wani’s death, Kashmir had witnessed violent protests in 2008 and 2010 where 42 and 110 deaths had occurred respectively, besides injuries to thousands of security men.

It was after these deadly protests, where rubber bullets and tear gas were found ineffective, that the pellet gun was introduced by J&K police as a more “effective and focussed” crowd control measure. One can always debate better means of crowd control, but one would expect two senior media personalities to be aware of the entire context before making comparisons that make it sound like the Bharatiya state gets some perverse pleasure out of targeting Kashmiri Muslims alone.

2.) During the Jat agitation, curfew was clamped on the worst hit districts and ‘shoot at sight’ orders were issued to the Army – over 30 people were killed, many in police firing.

3.) Violent protests do break out in various parts of Bharat from time to time – and authorities do deal with it using deadly force as required. For eg, last year in Mathura, 24 people including 2 senior police officers were killed in a police operation to clear illegal armed squatters from a park. But one instance where police is extremely reluctant to use force, even when their own are being attacked, is when Muslim fundamentalists are on the rampage as witnessed in Mumbai in 2012, Vellore TN in 2015, or Dhulagarh last month. For some reason, Shekhar Gupta and Barkha Dutt have not raised the question of why pellet guns were not used against these rioters.

Their silence over Dhulagarh is especially puzzling since they did not lose the opportunity of asking this exact same question over the violence that erupted 4 months ago in Karnataka over Cauvery water dispute with TN. 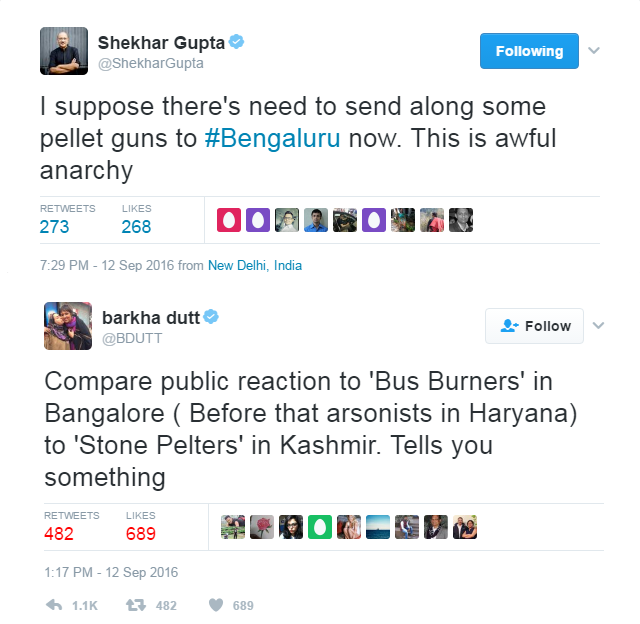 4.) It seems likely that police across the country is not armed with pellet guns and trained in more specialized crowd control measures as in J&K, as no where else are we seeing the kind of separatist mass protests rooted in religious fundamentalism and glorifying terrorists that we are seeing in Kashmir. This tweets sums up the the feelings of us commoners quite well –

True. Jallikattu protesters have killed and driven out non-Tamils, they are waving LTTE flags, and many Chennai policemen have been killed. https://t.co/OvfbzK6GQG

We appeal to Shri Shekhar Gupta and Barkha Dutt ji to educate us lesser mortals on what really constitutes ‘national interest’ or how to develop a ‘moral compass’ like theirs – surely we are missing something in our analysis, where simple logic and common sense is making us arrive at a completely different conclusion compared to their eminences.

“No Vibhuti or Kumkum”, owners asked to erase Hindu identities of bulls to participate in Jallikattu